Exclusive Interview: On The Offense talk hardcore and social network’s effect on the scene

At your age, in 2013, why is it that hardcore remains your chosen way to vent?

Sean: It’s the only way I know how to. I can listen to almost any type of music, but hardcore is my heart and soul. It made me who I am, and I owe everything to it.

What was the first alluring quality of hardcore?

Sean: The realness of it. It was just as powerful as any metal was at the time I first started getting into it, but the guys that we’re playing it, were just like me. They didn’t hide out after they played. They came out front and hung out. The stuff they wrote about was truthful and it meant as much to them as it did to me. It was and still is so much more than just a type of music.

What draws you into hardcore these days?

Sean: Same things that it did when I was younger. The songs, the thoughts, the feelings…they all still hold just as true now as they did then. Hardcore has remained a constant to me through the years, it’s like a foundation for me.

How do you feel about the modern media landscape (FB, Twitter, etc) shapes today’s hardcore?

Sean: I think modern day media has had both positive and negative effects on hardcore today. On the plus side, it has been able to reach out to kids that it never was able to back in the day, kids that need to hear it’s message now more than ever out there in a fucked up world. Even here, at home you can reach more people just from the laptop. But a major downside to the media boom is that it’s kind of made the hardcore scene in NY a little more impersonal. Back in the day, if you wanted to see a band play live, or if you wanted to find out about shows, buy a tape or a fanzine, you HAD to go to shows. When you got down to the shows, that’s where you would find out who was playing where, that’s when you’d pick up some new band’s demo, and that’s where you would meet people face to face and get to know everyone. Hypothetically now you can “friend” people on Facebook, download music right from the computer as well as buy merch, and watch YouTube videos of bands playing live. You can be into hardcore from head to toe without ever leaving your house. That’s cool and all, but that takes away from the aspect of a “scene” and I truly believe it’s so much more than just the music. The people you meet at shows and hangout stay your friends for years and years. You can’t get that from behind a computer monitor. I appreciate all the love and support we get on Facebook, but I rather have someone approach me at a show, say, “What’s Up.”

When Vinnie Value wanted to return to stripped down old school NYHC, he called the band Skinheads Still Scare People. How do you the view New York skinheads of the 80s?

Sean: Those guys were the originators and gave us everything we have. Love and respect.

Skinhead music certainly influenced the sound of NYHC, as in the intro to “Can’t Erase Regret.” What Oi! bands do you still listen to?

Shonen: Menace, Blitz, The Oppressed, The 4 Skins, Cock Sparrer, The Business, Retaliator, The Wretched Ones, The Templars, Forced Reality, and Pressure Point.

As elders of NYHC, you have been young and held hardcore to your ideals and certainly seen some horrible aspects of hardcore too. What advice would you have for young kids entering hardcore scene?

Sean: Be open-minded and be yourself. Don’t try to copy an image or ideals. Be you, think for yourself, and respect and look out for one another.

Sort of the same question, but in general to life. To get into hardcore when you did, you must have had a lot of anger. You obviously still have some of that inside. As an older man – to a young kid who is starting to understand the world (and how horrible it can be), what advice would you give?

Sean: Best advice I can give if it’s worth anything, is that whatever it is that’s tearing you up or beating you down, you’ll get through it, it will pass. Stay strong, and lean on your family and friends for help. Underneath all the nonsense that goes on in this world that seems to bury you, there is a beautiful world, the human experience, life itself is beautiful. It’s a cliché, but you only have one shot at life so stay strong and remain positive and you’ll realize what a gift life is.

What is up NYHC in 2013? It sure seems to be doing well. Tons of fresh blood: Abject, Setback, and Olde York all had great albums last year. Bands like Incendiary coming up. Breakdown, Killing Time reunions. Indecision. Plus Sick Of It All, Madball, Agnostic Front still tour constantly and put out music and impress audiences. . Urban Waste, Yuppicide, The Mob, and Antidote all put out albums! Tell about NYHC 2013.

Sean: NYHC is as alive and well in 2013. There is an amazing pool of bands recording, playing out etc. Most of the people I know that will be the first to say “NYHC is dead” are content with sitting at home listening to stuff on their I POD and maybe, occasionally going out to a “reunion” show. Totally ignoring anything that’s going on now. So it’s easy to say a scene is dead when you don’t contribute to it. Bottom line is people that say it’s dead just don’t have the heart for it. NYHC is still strong, and it ain’t going away.

Why is the old school hardcore more fulfilling than some amazing metal technical genius to guys like us?

Sean: For me, it’s the stripped down, raw, real feel. I was floored at how normal everyday guys like me, could just get together and play powerful music that made you go nuts without all the prep like the metal bands had. Not taking anything away from metal, I loved it then and love it now. But in the ‘80’s I wasn’t a kid with long hair from the Bay area in CA, I was an awkward kid from Queens NY with not too much musical skill but still wanted to say something, and too say it loud and hard.

Any thoughts or stories of Raybeez?

Sean: You always hear people quoting “Don’t forget the struggle, don’t forget the streets,” but you gotta also remember the next line which is just as important, “Don’t forget your roots, don’t sell out.” Ray wrote that and put those lines together for a reason and the man knew what he was talking about. RIP Raybeez.

Shonen: Warzone is one of my top 3 favorite bands of all time. Like almost all hardcore music, Warzone is fast aggressive music with real lyrics about real life. One of my favorite songs from Warzone is “Locked Out.” That song meant a lot to me when I started to get into hardcore. If you never heard it then you need to, especially if you’ve been in the scene for a long time. There were a lot of assholes, bullies and fighting when I first came into the scene. No one should ever think that they are better than any one else because they have been around longer. You have to earn respect, you have to give respect to get respect. You have to embrace the new kids who don’t know anything about punk rock and hardcore and are finding that outlet that helps them get through life. They are the spark that ignites the flame. This is just a piece of the attitude (just 1 song of many) that Raybeez had. Thank you Raybeez! RIP.

So you put out an album. How do you feel about it? You digging the sound?

Sean: Yeah, it’s definitely a wild trip for me. All the bands I’ve been in in my life, this was the first time I’ve ever gotten an album done and put out there, and this was the perfect time and the perfect group of guys to get it done. I owe so much to Mike, Shonen, Rob, and Six Pack, and the love I have for them is immeasurable.

“Scripted” and “Separates You…” might be my favorite songs. Can you tell me about the lyrics?

Sean: “Scripted” lyrically is just about not getting caught up in a fake life, like a life that’s just going through the motions. Like I said before, I truly believe that you only get to do this life thing one time around, and it’s sad to reach the end, reflect, and realize you we’re never really happy, that you just did what you thought you we’re supposed to do. “Separates You From Them” I wrote about a girl I know, that when I was at a real rough spot in my life, she became my greatest and most unlikely of allies and helped me get through it. So it’s kind of a salute to her, as well as all the truest of friends that we all have.

Any plans to record again soon?

Sean: As of right now we’ve been writing stuff and got about 6 or 7 new songs in the works. We’re constantly writing, so I’m gonna say we’re a little bit passed half way for a follow up. And I gotta say the new tracks are dope!!!! 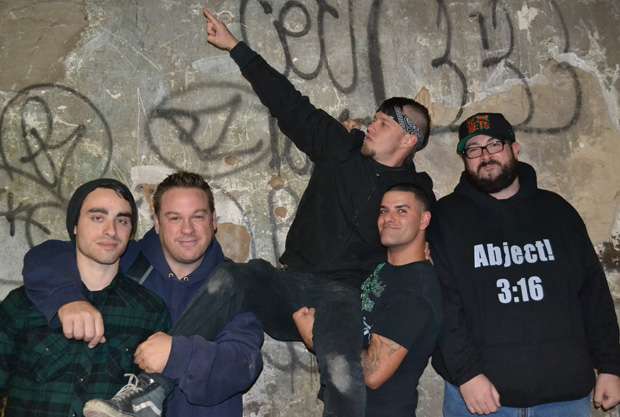