Formed in 2010, the duo of Sadgiqacea’s (pronounced Sad-Juh-Kay-Sha) first self-released EP of three songs was a giant of a record. They return with the four- song, 40- minute, False Prism, produced and recorded by Chris Grigg of Woe in September 2012. This collection of mind-blowing riffs is slated for release on May 7th, 2013, followed by a full American tour with Philly’s Hivelords (see all dates here). 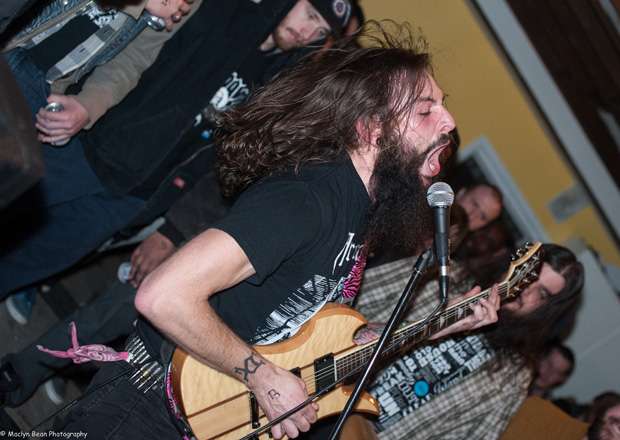 Obviously, with three titles containing “false” and the final using “True,” which aspects of truth are you investigating on this album?

EVAN: We thought it would be cool to describe the unlearning process as it relates to things that many human beings are taught to believe. Sometimes events happen in our lives that make us realize things are not what they seem. We question and then we can begin to learn. By naming a song “True Darkness” we wanted to say that the real evil in man is fear, because we are taught to live by it, and more often than not it prevents us from reaching our true potential as human beings. Obviously, I think things that are dark and evil are awesome. But I think “the devil” as he/it is portrayed via Christianity is a far lesser evil than the lies we are taught to believe. We put a different spin on the “evil” thing.


Can you give an example of a false prism?

EVAN: We used the word prism as a metaphor for the filter that all information in our society must pass through before it reaches the ears, eyes, and minds of the masses, to illustrate the point that you have to look through said prism it to see any light at all. It is mandatory for information to be watered down and filtered for our consumption. Therefore, you can’t look around the prism, because it is too big. From the time we are born, we are taught by our institutions to think a certain way, and we don’t even have the possibility of realizing this until many of society’s ideals have been instilled in us. So the prism is the filter that all our information passes through, and it makes all this information tainted.


When did you start to doubt the integrity of what the adult world (church, media, police, politicians, etc) was telling you?

EVAN:I remember being in 3rd grade and having the ideals of religion not make sense to me. One time, in church with my family I remember the priest saying, “if you don’t believe in god when you die then you’re going to hell,” and I thought, well, what if you didn’t actually do anything wrong? Does god only exist if you believe in him?

This philosophy type stuff I could talk about for hours. From there, it wasn’t long before my beliefs were that of an atheist, but I have become much more spiritual in recent years. I am really partial to most of the eastern philosophies on life.


Can you elaborate on – or provide examples of – “our own reflections on the dualistic nature of the evil we all see and experience”?

EVAN: This goes back to what I was saying about the metaphor of the False Prism. Things that have received evil connotations by being demonized throughout the modern era are often times not the biggest problem. Think about all the hypocrisy committed by the Catholic Church! I love heavy and evil music, but the people I have met playing it are some of the nicest people I’ve ever come across.


Do you believe humans have a selfish survival instinct that propagates evil? What drives human decisions?

EVAN: This is a very interesting proposition, especially when you think of it in terms of a caveman, for example. Is it evil for a caveman to kill a wild animal to live? And if so, is living itself evil!? I don’t think I have the moral compass to answer either of those things, but it’s a mind-fuck for sure. I think these days, being selfish is perhaps more of a belief that has been instilled in us through materialism than an instinct. Most people in the mainstream western school of thought believe that if you hoard your money and look down upon those who are less fortunate than you, then you are somehow succeeding. Many of us fail to realize that “what goes around, comes around” is much more than an old adage. I strongly believe in Karma and I try to do good as much as I can. It may be really ironic, but making “evil” metal music is the most honest form of self- expression that I have come across so far.


What peers push you musically?

EVAN: Hivelords, Woe, Sea of Bones, Before the Eyewall, Bubonic Bear, and Atriarch are all bands that I have been incredibly impressed with when I’ve seen them live. We have also played with all of them. It’s important to have peers that keep pushing you, and I am happy to call such skilled musicians my friends.

Fred: All of the above, Burden, Fight Amp, Ladder Devils, Ominous Black, and Ashencult to name a few more. 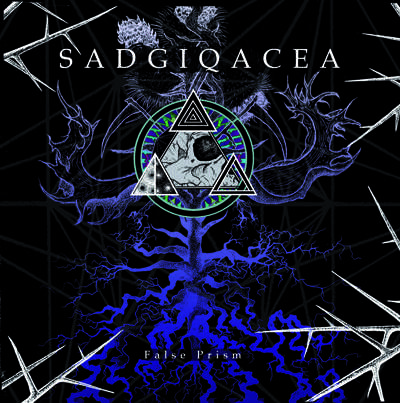 Who did the artwork?

EVAN: Fred did the entire layout of the CD as well as the vinyl. He also just did a sick poster for our recent show with Zozobra and Kowloon Walled City. He’s available for freelance album art, t-shirts, and posters here: http://www.ftgillustrations.com. I drew and colored the gatefold centerpiece for the vinyl with watercolor pencils. My main artistic outlet is tattooing, and I am an artist at Living Out Loud Tattoo in South Jersey.


How was working with Chris Grigg as a producer?

EVAN: Chris is great. He is very good at communicating his ideas and conveying what needs to be accomplished. Since he chooses his words wisely, he has an easy time helping make positive suggestions to help the direction of the final recording product. He nailed our sound with the live recording approach that we used for this record. This was our third time working with him and it was by far my favorite.

FRED: I can’t thank him enough for all of his efforts toward this project. He really knows what he’s doing. He was more than willing to work with me on my ideas for the vocals and I thank him for that. They turned out great!


The bio says that you draw from a ‘melting pot of influences’; can you name some obvious ones and some surprising ones?

EVAN: Ulver, Weakling, Opeth, and Meshuggah “play the notes I want to hear” as bands in the heavy/evil genres. They inspire me endlessly. I am a big fan of The Cure, Type O Negative, and the smiths, as well as some trip hop/lounge music. I don’t usually listen to anything that is considered “punk rock.” Some of the recent subgenres of punk music have just been too awful for words. Darkthrone is about as punk rock as I get.

FRED: I myself grew up on punk rock like Operation Ivy and Choking Victim, but more recently have been finding my true passion in the heavier, fat riff-induced side of metal and the like. Ever since I made that crucial transition. I’ve been diving deeper into epic stoner/doom and sludge, lots of black metal, as well some “post hyphen metal” and heavy rock and roll. Bands like Neurosis and Yob really put my stomach in knots and twist my insides, in the best way. From old to new, Darkthrone and Burzum seriously bury me alive, while WITTR cascades over me like a lush, grim forest. All of that aside, I sometimes even find myself drawing from older indie/emo bands like Sunny Day Real Estate and The Appleseed Cast.

FRED: Besides the full- length, we have a compilation appearance on Anthrosphere IV (Anthropic Records’ annualcompilation, showcasing a great variety of philly metal bands). We have a 6- week tour with Hivelords startingJuly 4th in South Jersey, and we plan to do a week-long tour in September as well for a festival appearance weare waiting to announce, and then perhaps another string of tour dates in the winter.


You have a full US tour. Is this all DIY, on your own? How do you coordinate the planning?


Do you wish you had a third person ever?

EVAN: Many of our friends have asked to play bass for us. Sometimes I think about what it would be like to have a bassist or someone playing second guitar with the same stereo setup as me… but as long as we’re both interested in what we’re playing, and it still sounds fresh and organic, we’ll just keep riding this wave for a while, so to speak. I played an 8-string a few months ago in a music store. That was pretty fucking fun!


In the end of “False Segments,” I hear some non-traditional metal instruments. Giving it an Appalachian feel. There are varied tribal rhythms and such throughout the songs. Can you give me some idea from where those influences came? You listened to a lot of Roots by Sepultura, huh?

EVAN: I always liked Chaos A.D. the best, but yeah, there are some solid songs on Roots for sure. My brother said that part in false segments sounded like “peasants in medieval Russia” or something. Did that even exist? Violin is my first instrument, and even though I’ve slacked off with it considerably over the years, we thought it would be fitting to have it on the record, and I like how it turned out.

FRED: I wanted to incorporate even more non-traditional metal instruments than we put in actually, as well as more ambient soundscapes, but it’s what we made work. I learned the accordion to play just those notes. I really thought it brought somewhat of an interesting element to the composition and blended nicely with the droning tune that Evan plays at the end of False segments. For one thing, I have always enjoyed the use of tribal style rhythms in songs. In most cases, it’s the perfect mood setter for a primitive vibe. I think my affinity for that style of drumming can be credited to the likes of Jason Roeder, Aaron Harris, Dale Crover and Bill Ward for sure, the song “Children of the Grave” from Sabbath especially, oh and the majority of Kylesa’s Static Tensions. They served as a strong influence when we started the band and still do. 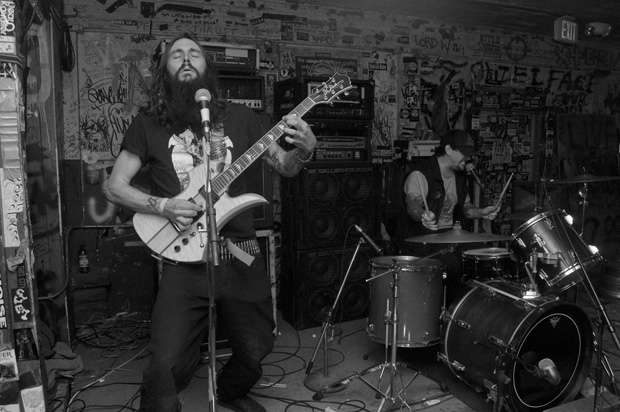