Exclusive Interview: The Dear Hunter on the new album, the new label, and the future of the ‘Act’ series – By John B. Moore

The Dear Hunter
By John B. Moore
Cover Photo by Jonathan Weiner

Casey Crescenzo’s last few releases included a multi-album arc related to the color spectrum (the 9-EP Color Spectrum collection) and three complete albums based on the birth, life, and death of a boy set at the dawn of the 20th century (Acts I, II and II). So he’s earned the right to put aside any grand themes for his latest effort and just put out an album about himself. And he has.

The12-track album Migrant is his first on his new imprint Cave & Canary Goods, a partnership with Equal Vision Records, his new home after leaving Triple Crown which had put out albums by The Dear Hunter and his previous band The Receiving End of Sirens.

Migrant, though not tied to a specific theme, still carries with it Crescenzo’s deviation from the standard guitar, drum, bass combo and includes a sweeping soundscape, a hallmark of his music. Crescenzo spoke with us recently about the new record, the new label and the future of the Act series. 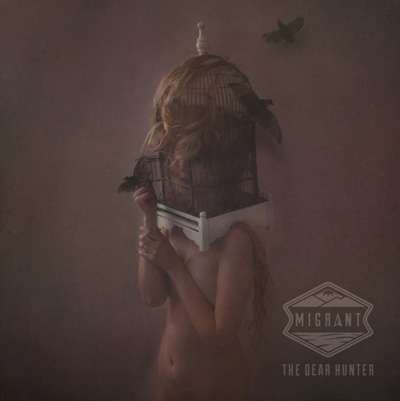 So this is your first record under the imprint you have at Equal Vision Records. How did that all come about?

After parting ways with Triple Crown Records, I had a great interest in self-releasing but it was clear that I didn’t have the means to make that happen. After speaking with Equal Vision and understanding not only their interest in working with The Dear Hunter, but also their incredible passion for music in general, it was a no brainier. It had been a real dream to work with them.

Do you plan on releasing albums by other bands on the label?

Most definitely! As time allows it; at the moment I am finishing up Naive Thieves’ first full- length album to hopefully release in the near future. The hope is that over time it can act as a different sort of label. I would love to be able to release books, sell fine art prints, etc…. I want it to be a good outlet for the friends I have in the artistic community who might not be given the shot they deserve otherwise.

Between the Acts records and the Color Spectrum releases, you have never been shy about taking themes. That being said, is there a general theme to Migrant?

The general them is me. It’s just a record from the heart about my hopes, fears, faults, etc. I knew I needed to pull back the curtain. I’ve spent the last decade touring the country. I needed to come up for air and take stock of myself as a human being.

Because the concept wasn’t as elaborate as previous releases, did you feel a little more relaxed writing and recording this one?

Writing for a concept is much easier. I always give myself a set group of guidelines when writing in a concept and those internal suggestions keep me on course. For Migrant there was no road to travel. It was a field. There was a bit of running in all directions at once until I finally was comfortable just standing in the field and looking around.

Was the entire thing written before entering the studio or did you create a lot of these when you were recording?

Yes the record was written before the studio, but the details in production were left out until we were in the studio.

You used a string section for “Whisper”. Did you know all along you wanted that added to the song? How difficult was it to get the sound in your head on the record with that one?

Yes, I knew the strings would be there from the beginning. They were written first actually. The tough part was reducing the parts down to quartet… In my head it was to be more of 16-32 musicians instead, but it made more sense with the song to drop the polyphony a bit.

Have you thought about how you are going to play these songs live? Assuming you aren’t bringing a full string section along with you.

We’ve been playing “Whisper” for a while now, and instead of mimicking the strings, we just approach the song different. It actually makes for a really wonderful live version.

Do you have plans to ever build on what you created with the Acts records?

I definitely have an interest to revisit that world of music as soon as I feel the natural passion to do so. I have no immediate plans, but I also have no fundamental aversion recording Act IV.

What’s next for you?

Tough to say. I think we will be touring a good deal more. At the moment we are wrapping up our headliner and taking a little while off. We shall see.

PrevInterview w/ The Beyond bassist RW – By Eric May
Exclusive Interview w/ Center of the Sun guitarist/vocalist Rick Contes – By John B. MooreNext