Featured Interview: Soil vocalist Ryan McCombs on playing for the troops, his influences, and their new album ‘Whole’

Soil
Interview with vocalist Ryan McCombs
By Eric May

After many long years, SOiL has finally gotten back together with their original frontman Ryan McCombs after his brief stint in Drowning Pool. Even though he thought it would never happen, after a tenth anniversary tour for 2001’s Scars; the band got back together and started work on a new album which would be later be titled Whole. Ryan talked about how this album came to be, as well as playing for the troops and his influences.

Ryan, it’s been a long time since you’ve been in SOiL. How did you wind up back in the band after all these years?

The band received an offer to do a tenth anniversary tour for the album Scars in the UK. We got to talking about me coming back to do this run and it all worked out. I was getting to a point in my career that I needed a change or to walk away again. I was feeling burnt out. When we returned from the UK tour, my head was still in the direction of walking away, but at the end of the day I couldn’t deny how much fun we had during these anniversary dates. So after A LOT of talk, we decided to continue on doing shows and perhaps even make another album together.

The new album Whole is a beast. How long did it take to write and record this album and where was that done? What was the mood that you wanted to convey with this record? It’s one of the most abrasive discs I’ve heard since Scars.

Thank you. When I hear something like that, the comparison to Scars, I feel pretty damn good. We wrote the album in a myriad of ways. Some songs we were all together at Tim’s, Adam’s or in a rehearsal room in the Chicago area where they are from and still live and on others, Adam would get the skeleton together and send them off via the internet to Tim and to myself since I was living in Baton Rouge, Louisiana at the time. You mentioning it alongside Scars makes me happy, because early on in the writing process it concerned me whether or not the new material would appeal to the people that loved Scars in the same way. I pretty much forced myself into a writing block or thirty-seven of them in the process due to this. It wasn’t until I finally sat back and realized that what made SOiL songs sound like SOiL songs in 2001 was the same thing that was going to make these songs “SOiL songs”. It was us being us.

What are some of the lyrical topics on Whole? Some of the tracks seem to deal with an estranged relationship.

As has always been the case, I just write about personal life experience. Things that we all go through by waking up each day and being human beings.  It’s the only way I have ever been able to put words to song.  Relationships, whether they are love, friendship, work, religious, family or any other, can stir a lot of emotion. So naturally, a lot of the times when I hear the guy’s heavy tones, I sing about those serious sides to life; which are the sides that crush a simple smile into the dust and completely demolish the puppy dog and flowers sides to life like a tank over a lady bug.

Ryan, what was it like being and touring in one of the bands in the world, Drowning Pool? What are some of your best memories being in that band? What were some of the hardships?

Before joining the band we were very good friends, so when I decided to get back into the music they were a natural fit. The times that I will cherish most from my time with Drowning Pool will easily be the USO and MWR tours we did while I was there. Playing for the troops was a humbling experience. It wasn’t about war or peace. It was about supporting some incredible people doing their duties. There were many life changing experiences with those shows. As for hardships, the guys were great; but I was what I was at the end of the day – the new guy. They did a hell of a job trying to make me feel otherwise at times, but in the reality of things I felt much like I did in my first go around with SOiL – that other wheel.

The band sounds like a well-oiled machine on this record. It certainly seems like you’ve all been waiting a long time to get the classic lineup back for this album.

I don’t know if waiting is accurate as I NEVER thought we would do another SOiL album together. I think a lot of that sound comes from, as I mentioned before, us being us. We have the vital ingredients to SOiL together again. Tim has always been good for some riffs and a lot of times they are the riffs that lead to those unique SOiL moments in a SOiL albums track listing.  Adam has always been the guy to take a riff and build a song or write it musically himself. Musically, Adam has always been SOiL to me and I lived in the practice space during the early albums. I was in the room as every song was built in that guy’s head. I was always responsible for the words. We were going to do a heart/me, mind/Tim and soul/Adam theme to this albums artwork before I changed it up and went the direction with it that we did.

What are your promotion plans for the album? What will be the first single? Are you working on a video?

The first video to the first single “Shine On” was just released and can be seen and heard at many places including our YouTube page (and below).


What bands would you cite as influences for Soil? What artists/bands made you first want to get into playing music?

We all vary on this.  For me I grew up to Credence Clearwater Revival, AC/DC and such. Then got into Metallica and eventually Alice In Chains. They were probably the first band that was “MY BAND.”  Biggest influence though for me personally, was my brother Matt McCombs who played in a lot of local and regional bands in the Indiana when I was growing up.

What are some things about Soil that most people don’t know? What do you guys do when you’re not making music? What kinds of hobbies do you enjoy?

I’m not sure what in the hell Tim does outside of SOiL. He eats, sleeps and breathes music. Adam just got married, so I try not to think about how sad his life is now…just kidding. He was one of the lucky ones that married his best friend and a hell of a girl. One of my favorite drinking buddies, so you know I approve.

I’ve always been an open book. If I’m not sharing way too much of my life at www.facebook.com/OfficialRyanMcCombs then I’m writing about it in the book that I have been working on.

What kind of instruments do you guys play on Whole? What preferred brands of guitars, drums, bass, exc. do you use? 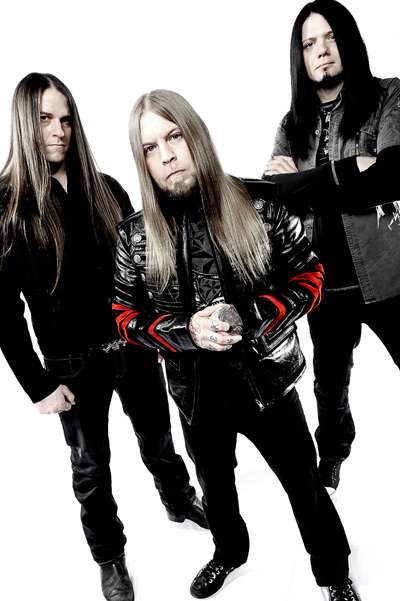 What is the best tour experience that you can remember from being in Soil? Have you met any legends while on the road? If so, what was it like meeting these legends? What are some on the road hijinks that you can share with us?

Fuck, I could write a book answering this question. We have been graced with the opportunity to share the stage with pretty much everyone at some point or another. Best experience I had was probably that first big tour. “Merry Mayhem” in 2001 with Ozzy, Rob Zombie and Mudvayne. I hated a lot of the on the road hijinks from the first run with SOiL, because I was the sober guy. Now that we are all drinking like drunken fish, I just forget most of them. Along with touring drummer Mitch Gable, we have been having a blast being out on the road together. The guys that work the road with us crew-wise admittedly do so for the laughs over the crap pay we can afford to pay them.

Technical death metal has been storming the scene these days and I know that the majority of you originally came from a technical death metal band by the name of Oppressor who broke up in the late 90’s. Is there a chance that Oppressor might get back together one day to show some of these kids how it’s done?

Yes, Adam and Tim were two of the founding members of the band Oppressor. I really can’t speak for them on a possible future Oppressor release. I prefer to keep them in the SOiL frame of mind for a bit longer. But then again, I’m a selfish singer.

Finally, what do you think about the state of the world right now? What are your political views, if any? Do you think we’re headed into a police state or is everyone just paranoid? What do you think of the NSA spying on us?

I think there are a lot of problems in the world today, but then again, there always has been. I view politics the same way I do religion. There are some good ideas, but they are wrapped up in a lot of bullshit. I avoid both subjects. As far as the NSA goes, I see nothing new, we just know more about it and it has a new name.

Thanks so much for your answers and for putting the balls back into alternative metal! Being a longtime fan, I appreciate the effort very much!

Thank you. Its people like yourself that help keep us connected to the people that allow us all to do what we do. Thank you much.

PrevInterview: Kayleigh Goldsworthy on going solo, having her longtime friend film the process, and the future of The Scarlet Ending
Featured Interview: Mina Caputo on gender identity, the new album, and the Indiegogo campaignNext