“You’re a huge reason we are still alive / You make us want to continue to strive / To be living for you, living for us / We’ll care for you until we’re dust / Wake up tomorrow.”

So begins The HIRS Collective’s debut LP, Friends. Lovers. Favorites., released April 20 via Get Better Records and SRA Records. The track, “Wake Up Tomorrow,” featuring Bitchcraeft, is everything the Philadelphia-based collective’s friends, lovers, and favorites have come to expect from them—crushing and concise—but it’s also a fitting intro for a record that is, at its core, a love letter. From its affectionate anthems, such as the opener, title track, and “Y’all Are Gorgeous,” to its violent rallying calls, such as “Last Acrylic Nail in the Coffin” and “Hard To Get,” the whole album works in service of a single tenet: dedication to the well-being of their community.

“If it weren’t for our friends, lovers, and favorites—who have become our family—a lot of us in the collective wouldn’t be alive,” HIRS say. “The amount of outreach and support we have gotten from them is mind-blowing and so heartwarming. Makes us feel like we are either doing something kinda right or that the work and support we’ve tried to give is coming back to us in the sweetest ways. Also, the word ‘community,’ like many others—‘queer,’ ‘safe space,’ etc.—have been trampled on and overused or misused by so many folks trying to infiltrate our community and scene. I hope we can take those words back and make them feel like they have more genuine meaning again. We really hope that we’ve also helped keep some folks alive and [let them] know that they aren’t alone in the world.”

Being a collective rather than a band is just one way that HIRS invite active participation from their community, and this barrier-breaking between artist and audience has long been a vital aspect of punk. Indeed, The HIRS Collective are adamantly punk, but they see this designation as a reflection of their ethos more than a way to classify their music.

“We challenge the idea of ‘punk’ as a genre and [see it] more as, hopefully, an ethic,” they explain, “one in which we try to be able to include everyone by trying to always play all-ages shows; invite and support bands, groups, and performers that are made up of other oppressed and marginalized folks; have sliding scale and no-one-turned-away-for-lack-of-funds shows; have sliding scale ideas with merch; invite trans, Black, POC, femme, short, etc. folks to take up space at the front of shows—stuff like that. If we have profit from shows and/or tours, we try to donate that to local folks [and] places in need and be transparent about the money we do or don’t have.”

Still, listeners won’t find much space between the music and the message on Friends. Lovers. Favorites. HIRS’ songs are swift, direct punches to the gut. They have an undeniable gift for brevity, and though some may be tempted to wax poetic about the artistic and political intent behind keeping their music short and their message simple, as per usual, it ain’t that deep.

“If something needs to be longer, we’ll make it longer,” they shrug, “but it seems we’re able to get our points across quickly. Also, if you hate us, you don’t have to deal with us too long, and if you love us, we’ll always leave you wanting more. That’s a pretty good feeling.”

Friends. Lovers. Favorites. may be HIRS’ first full-length, but the collective have already released a slew of splits, singles, and EPs containing literally hundreds of songs—most recently their lauded October 2017 EP, YØU CAN’T KILL US, and its November 2017 follow-up, How To Stop Street Harassment. Regardless, the new album feels like a major milestone in their progression, and they couldn’t be more excited.

“It feels huge,” they confirm. “We’ve normally written and recorded stuff over the course of maybe a month or a week or even just one day. This took about four years, and it was so involved and hands-on. It also involved so many of our friends, lovers, and favorites—hence the name, duh—so it feels so special to have so many angels we love and care about so much as a part of this record in so many different ways.”

Some of those sweet baby angels are gargantuan powerhouses of the underground. The list of guest musicians on Friends. Lovers. Favorites. is staggering, including Shirley Manson, Laura Jane Grace, Martin Crudo, Erica Freas, Marissa Paternoster, Alice Bag, and Sadie Switchblade, just to name a few.

“It meant so much to us to humanize these folks that we have looked up to for so long,” HIRS say. “It’s amazing to be able to ask folks you might see as these huge, untouchable rock stars to be on our record and, then, for them to be excited, communicative, see the importance of our message, and say yes. We’d be lying if we said we didn’t cry or get happy-nauseous when the folks we asked said yes. So many intense feelings. Thank you to all of them!”

It may feature some serious heavy-hitters, but the true star of the album is the powerful statement it makes. Its songs dip expertly between uplifting odes like “Always Surviving,” scathing indictments like “Assigned Cop At Birth,” and furious rallying calls like “Harmful Intent,” which boasts the lyrics: “We’re not peaceful / We’re violent / We have harmful intent / This is a trans girl takeover / We won’t be submissive or de-escalating anymore.” Is there a thread that ties all of these tracks together?

“Definitely,” the collective say. “Existing in the world as marginalized and oppressed people. Being an ally for them/us.”

Part of this allyship comes in the form of one of the most historically important yet commonly derided forms of radical action: bashing back and violent resistance. Even their logo—a hand with long, sharp, hot pink fingernails brandishing a pocketknife—makes it clear that righteous violence is a cornerstone of The HIRS Collective’s mission statement.

“It’s layered and complex,” they offer. “Violence is not the only answer, but we support it when necessary. When there are trans folks, specifically trans women, specifically trans women of color, being murdered over and over and over again, why would we ever choose to only be passive? People, often cis straight white men, come at us all the time, like, ‘Why are y’all so violent? Why do you want to hurt men?’ and we just want to say, ‘Read between the fucking lines. It’s not all about you. It’s about us and how we are in danger all the time.’ We also support de-escalation, nonviolent communication, accountability processes without excommunication, and more, but we also support violence as a last resort—and as a first, because we are sick of being in danger without being able to respond.”

Though many are beginning to recognize the crucial role violent resistance plays in a multi-pronged approach to radical action, there is still a tendency to see the tactic as more palatable when it’s proposed by white voices and movements. Even the NRA—that opportunistic lobbying group, ahem, we mean social welfare organization and champion of the second amendment—worked to push gun control legislation in the ‘60s in order to suppress the open-carry tactics of the Black Panthers, and that legacy of racial double-standard lives on today in even the most so-called progressive and radical circles.

Punk and hardcore are no exception. Despite growing pushback against the distinctly white and male violence that characterized the scene’s origins and an increasing interest in doing critical work around racial justice, it’s far more likely to see praise heaped upon these messages when they come from white and white-passing musicians, while artists of color continue to get the side-eye. This trend makes a track like “I’m Tired” stand out like a fiery beacon. The song features lyrics and vocals by Pierce Jordan of Philadelphia’s Soul Glo, a band who harness hardcore’s potential to fuel Black liberation.

“The song is largely about microaggressions I observe and experience in the city as a whole,” Jordan says of “I’m Tired.” “I focused on West Philly, because over the seven years I’ve lived here, I’ve watched the two colleges in the area, Penn and Drexel, make the area more and more expensive—read: white—each year. Additionally, West Philly, I think, has a higher concentration of ‘punks’ than almost any other region in the city. While I feel this would make a lot of people feel like they were surrounded by kindred spirits, I end up recalling first a lot of the blatant disrespect that I’ve seen directed at social others and each other by some. It’s almost funny how it was first Lenape land stolen, then made into a largely Black neighborhood—formerly called the ‘Black Bottom,’ because apparently, it was so undesirable to live there—during which time, it was firebombed, and then ultimately, [it was] razed entirely, making it finally suitable enough for white life to thrive.”

“Even more hilarious past that is how a lot of these microaggressions are coming from liberal-appearing white people,” Jordan adds, “even though a lot of them have dreadlocks or won’t look me in the eye as they walk past me on the street or will walk into oncoming traffic in the middle of the day to get onto the opposite side of the street when they see me. Shit like this makes you not give a fuck about how you look to people, whether your hood is up or down, because you’re probably seen as threatening regardless. It’s hard—men make the world unsafe for people every second of the day, so it simultaneously creates a vortex of self-doubt and confusion about the world at large and a single individual’s place in it.”

“Regardless, it’s also funny to think that these same white liberals are so invested in the lives of marginalized people,” he concludes, “and I’m told by a sign that my life matters as people glare at me when I walk into their establishment or around their neighborhood without an immediately discernible reason. I talk a little more about this on Soul Glo’s next batch of songs to be released on a split with San Antonio’s Amygdala on A-F Records.”

As if all the pathos, rage, joy, and general badassery imbued in Friends. Lovers. Favorites. isn’t enough, the LP also comes with a copy of YØU CAN’T KILL US and the brilliantly titled YØU CAN REMIX US, which features the EP’s five tracks remixed and reimagined by women musicians.

When asked which of the 20 new songs they’d like to highlight, The HIRS Collective share, “It was really exciting to hear our music through the lens of other folks on the remixes of YØU CAN’T KILL US, but really, every single track [on Friends. Lovers. Favorites.] feels so important and exciting for so many different reasons to us.”

HIRS will be out on the road until late May, but after that, what lies ahead? More tours and shows? New music?

Until then, they only ask that you remember:

Grab our HIRS flexi issue by clicking the image below. 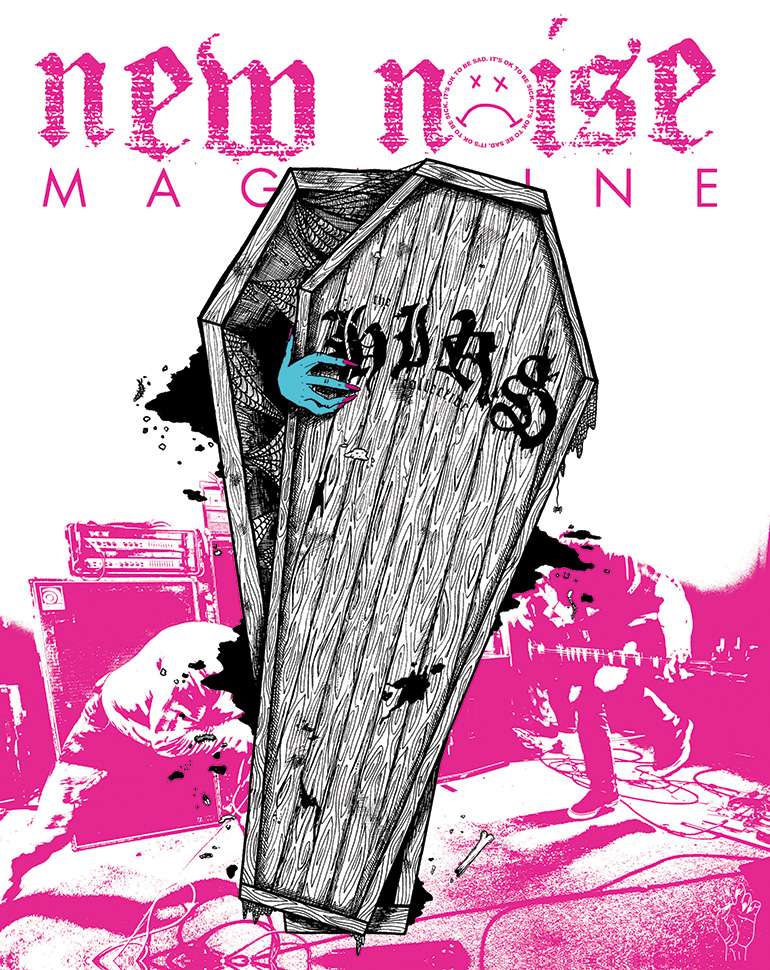