Over the last few years, death metal has seen an overwhelming boom in popularity thanks to all the reunions from older bands, as well as the amazing crop of new blood. For those who need a history lesson on the genre and its history, Handshake Inc. has now released Extremity Retained, an oral history of death metal and extreme metal as told by some of the biggest and most revolutionary names in the genre. The book was created by Jason Netherton of Misery Index and formerly Dying Fetus and it really is perfect for older fans wanting to reminisce about the good old days, as well as those who completely missed it all and want to read about all the gory details.

The first thing I’m curious about regarding this process is what came first, the interviews with the different bands or the idea to make a book about the history of death metal? 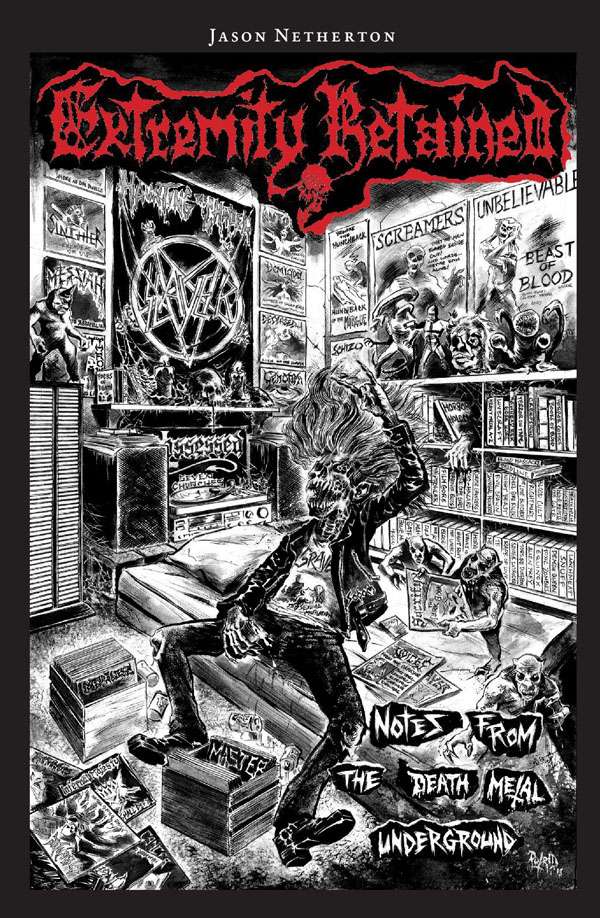 It all developed spontaneously, I had no idea at first what I was going to do with all the stories I was gathering, just that there seemed to be some value in collecting them, in the tradition of oral history. I bought the digital recorder and carried it around with me on my travels from 2010-2013, a period when my band Misery Index did a lot of tours and festivals. It was a sort of hobby at first, but after a while I looked at what I had and thought it would make a nice contribution to the scene, because it was about 25 years old at that point and had yet to really be historicized properly through first person memories and anecdotes.

When you started the process of these interviews with all of these bands, did you create a big list of bands and people you wanted to include in the book or was it more about catching whoever you could whenever you could talk to them?

I had no list actually, it was more or less who I ran into along the way. If I was backstage at a random festival like With Full Force in Germany, I would look around at all the dressing rooms and just say, “okay, there is Morgoth, why not chat with the singer Marc, about the old German scene in the late 80s?” etc. So, after a while I accumulated over 100 contributors. Some were through email and some were through phoners/Skype, because sometimes people would not be in the mood to chat, and would just say “let’s do it later after the tour” or something. The idea for me eventually was more about getting a broad, international collectivity of diverse voices, rather than targeting the “A” list death metal heroes…there are plenty of “A” listers in there, but to really get the vibe and ethos of the underground, I was looking also to get the marginal and front-line voices as well, the bands that did not get as big, the zine writers, etc…that to me is the essence of the underground, because it was so driven by fans and fans who started their own bands.

As far as the book’s structure goes, I would think that was a bit of a nightmare. When deciding what stories should go where, did you basically just transcribe everything and study what you had to determine where it would fit and what the theme would be or how did the process of deciding what should go where work?

Yes, you nailed it. Once I began transcribing interviews (and this is a specific type of torture reserved for the 7th circle of hell I believe!), it became apparent that certain themes were unfolding, and certain threads were starting to form. For example, a tour story is obviously a tour story, so if Anders from Unleashed or Mitch from Napalm Death is telling me what it was like to go out on their first tours in 1990-91, that sits well in the fourth section of the book – Rotting in the Van. The lengthy chat I had with Jim Morris from Morrisound Studios in Tampa (I stopped in there while visiting my father who lives outside Tampa in early 2013) – his recollections and stories fit well with the third section on Studio and performance called Skeletal Forms. It more or less was built up organically like this, as various parts of various conversations became more and more situated into identifiably specific categories. One binding thread throughout the book is the transition from analog to digital culture, and how the internet and its technological extensions more or less upended the way the underground worked in its early years (fanzines and tape trading), and how newer “immediate” media forms like the MP3, blogs and downloading have affected things in terms of sincerity, mystique and authenticity.

Due to all of the transcription required, plus the timing of the interviews and the structuring and whatnot, would you say that this type of book was more difficult to concoct than a basic novel?

I guess it’s perhaps just as difficult, but from another angle. Perhaps with a novel you are relying far less on other people to help you complete your task. While with my book, the “content” (of oral history) is from other people – yet I compiled it, transcribed it, edited it and contextualized it. So in this way, if there was no scene to dive into and investigate and no interview subjects to engage, it would not come together very easily!

Of all the amazing stories that you got for this book, were there any in particular that really stood out to you as your favorite?

I really enjoyed talking to Jim Morris, that was a big highlight, just learning how this one studio in Tampa randomly became the one that “figured out” how to properly record, or capture death metal, and give so many classic albums that aura that stands today. Also, there were the unexpected interviews, like Alan Averill from Primordial, who is not a death metal singer, but grew up very much a death metal fan in Dublin, Ireland in the late 80s/early 90s, and who was very cool in relating the tension and chaos that defined the local youth culture at the time. Also, I really like the contributions from South America, specifically Andres Padilla from Chile (Violence Zine) and Alex Oquendo from Masacre (Colombia), who really gave a nice politico-historic context in describing their local scenes in the late 80s/early 90s as being very much response/reaction to the dark periods in their nation’s histories. Beyond this, the collectivity of tour stories is fun, and will probably be the most interesting for some, because they are so full of uncertainties, trials and errors.