Interview: We Have A Chat with Alestorm, Scotland’s Finest Purveyors of Pirate Metal

Interview with vocalist and keytarist Christopher Bowes  |  By Brandon Ringo

Ahoy, landlubbers! For a decade now, Alestorm – Scotland’s finest purveyors of Pirate Metal – have been sailin’ the high seas, pillagin’ and plunderin’ across the globe. Now they be releasing a new album of fist-pumpin’, mead-drinkin’ tunes. Raise a glass and sing along, or be keelhauled in the briny deep like the scalawag ya arrr.

What’s been going on since your last release three years ago? When did you start writing Sunset on the Golden Age?

Since the release of Back Through Time, we’ve been touring the world pretty nonstop. We finally got to the point where we get to do headlining shows everywhere in the world, which is kinda cool. Doing support slots all the time was getting boring! [Laughs] I also brought out my own line of skincare products, but they didn’t do so well. “Scurvy (TM) – because yarr worth it” wasn’t the best advertising slogan. But the actual writing for the new album didn’t start until like, midsummer 2013. When I feel like it, I can churn out songs at a million miles per hour.

How did you approach songwriting and incorporating so many disparate elements on Sunset?

Well, for the first time, [guitarist] Dani [Evans], [bassist] Gazz [Murdock], and [keyboardist] Elliot [Vernon] contributed a couple of riffs, which took some of the strain off me. Maybe it added a new edge to the sound, who knows? But I did deliberately try to incorporate some new elements – it’s so easy to fall into the trap of writing “Yet Another Pirate Metal Album,” so I forced myself to put in all these surf rock elements, plus all the screaming, and even the rapping. I think it works!

Who created the chiptune intro on “1741 (Battle of Cartagena)”?

I was just messing around with one of my synths – reFX Nexus, for those who are interested – and ended up on this silly chiptune style preset. It just felt like the right thing to do! We’ve been using a chiptune inspired song as our live intro music for a few years now, so it’s nice to finally incorporate that sound into our proper music.

How did “Hangover” end up on the record?

We’ve done a pop coveron pretty much all of our releases so far, and I didn’t want this album to be any different. Originally this song is by Taio Cruz and Flo Rida: big stupid dance-pop anthem that it is. I heard it on the radio one day and just knew it had to be on the record. I’m particularly pleased with the rap section. I bet there’s gonna be a bunch of people who hate it… Which is all part of the fun.

Is it difficult not to repeat lyrics while sticking to the limited subject matter of “pirate metal”?

There’s only so many times you can rhyme “quest” with “west,” “treasure” with “pleasure,” and “plunder” with “asunder,” before it all stars sounding stale [Laughs]. So we’ve gone a bit more bizarre with lyrical themes this time ‘round: there’s a song about underwater bees, a song about an invasion of space squid zombies from the future, and a song that’s just secretly a recipe for cheeseburgers. So there’s always plenty of lyrical territory left to explore!

Are your lyrics fictional, or is a bit of reality thrown in as well?

Mostly, it’s complete fiction… But I think “Drink” is probably a wee bit autobiographical. Basically, it’s about how we’re all poor as shit and doing this for the fun, and how we are always very happy to be given free alcohol. Please buy us shots, if you ever see us. Thanks in advance!

Are there particular books, movies, or records that inspire you?

I’ll be honest, I’ve got absolutely no idea about historical piracy. Everything I know, I learned from skimming Wikipedia for five minutes after someone asked me a tricky question in an interview once! Most of the lyrical ideas just come from inside my head, or from stupid in-jokes. ”Wooden Leg” essentially started out as a dare to write the most asinine song ever. Musically, the greatest inspiration ever for me is the English symphonic metal band Bal-Sagoth. Pretty much inspires everything I want to do. Also, the music of Alan Jackson; “Chattahoochee” is the best Country song of all time.

I remember wanting to be a pirate when I grew up. Does it blow your mind that you’re living this childhood dream?

Yeah, it’s kinda cool. I often think back to the day I sat down at a piano (sometime in 2003) and decided to write a wee power metal song about pirates for a laugh. If you’d told me then that I’d eventually spend my life going ‘round the world, dressing up as a pirate and partying with millions of fans… Damn. We’re very lucky to have this opportunity! Party on, Wayne! 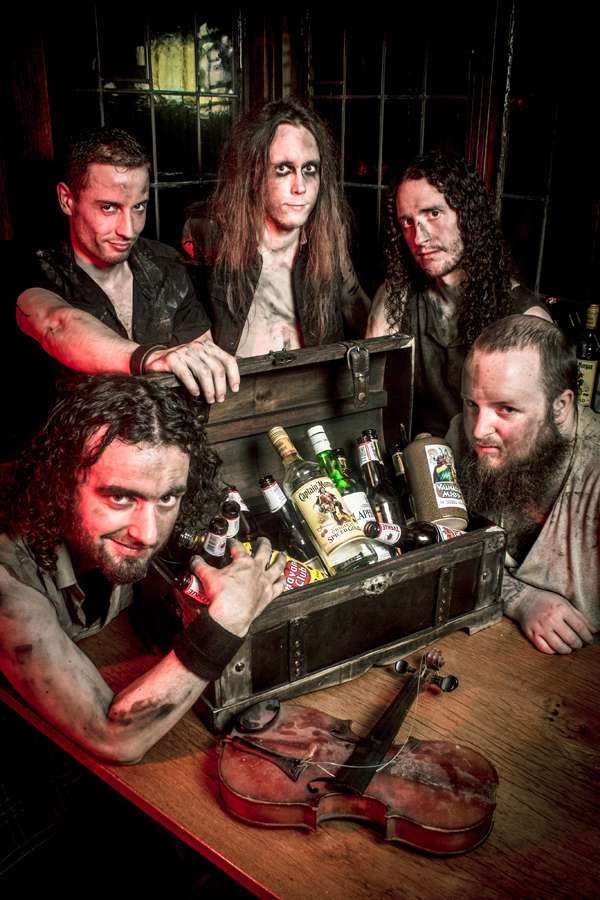 PrevInterview: Kayser Tells You How To ‘Read Your Enemy’
Interview: The Phenomenauts Talk About “Rocket Roll” And Being Drawn To Earth’s CapitalNext