Interview with vocalist and guitarist Sean Bonnette | By Damian Burford

Andrew Jackson Jihad have returned with Christmas Island, their follow up to 2011’s critically acclaimed Knife Man. Along the way, the band have found a larger fan base, a new label in SideOneDummy, and new challenges confronting them. We chat with vocalist and guitarist Sean Bonnette from his temporary home in Lansing, Mich., about these challenges, the importance of art, and working with former the pAper chAse frontman and Grammy-nominated producer John Congleton.

Andrew Jackson Jihad has had a long working relationship with Mike Park and Asian Man Records, but with the release of Christmas Island, you made the move to the larger SideOneDummy. How did you make that choice?

As much as I think we resisted the move, we always kept ourselves open to the idea. That was pretty much based on Mike Park’s encouragement to do so. The decision to do our records on SideOneDummy [is] not so much a parting from Asian Man. We’re still very much involved with Asian Man. Mike is our mentor. We wouldn’t do anything without his blessing, honestly. After meeting SideOne, and really, really liking them, and getting Mike’s two cents – he really likes them as well – Mike thought it was a good idea, so we did it.

Is it hard to make the transition to a bigger label?

Not really. The part of it that actually is more work is doing a lot more press, which is something that we wanted to do. It’s not hard at all. It was hard to find a label that would meet our specifications. The journey to find SideOneDummy was pretty long.

We were looking for a label that would let us have as much control over the record as we wanted.

Your eclectic songs have a dreamlike quality, while producer Jon Congleton’s former band the pAper chAse could be the soundtrack to a nightmare. How natural is the pairing of you two?

I think that there is a weird little thread that puts Andrew Jackson Jihad in the same kind of lineage as pAper chAse, as far as music that is not afraid to go to strange places to do what it needs to do. I saw the pAper chAse about 10 years ago at the Modified in Phoenix, Ariz. I was just floored and terrified of that band. They were so good, and so powerful live. At the time, I had now idea that the singer of that band would become someone I would put a lot of trust into, and have a really good relationship with.

How did you choose Congleton for this project?

Oh Man! It was no contest! [Laughs] He approached us as a fan. Andy [Bothwell] from Astronautalis

turned him on to us. He wanted to get the music, but he never downloads things illegally. He ordered records off of our webstore and sent us a little email saying, “Greetings! This is John Congleton!” It just said, “Hey man, I just heard your stuff I really like it. I’d love to record you guys sometime. Anyways, stay in touch!” We continued talking and I would send him demos and stuff. It was great! If we did do a record together, he offered to just record it or to produce it [as well]. He gave us two options. We inquired about the production thing. He laid out what it would be like with him producing it. It pretty much involved both parties – AJJ and John – trusting each other’s instincts. That’s what we did and it was great!

It’s been three years since the Knife Man LP. Was it challenging to record a follow up record? Especially when Knife Man is so beloved?

For a time, it really was [challenging]. I think I was still kind of in the Knife Man frame of mind when I was trying to write stuff for this record. There are definitely some songs from the period before…. I don’t want to say that they are Knife Man songs, I was kind of writing them around the time Knife Man was getting ready to be put out. I think it was before I really said goodbye to any anxiety over not following up that record, which I am super proud of, with another record. If that makes sense. I was super proud of Knife Man, and for a while, I was scared that whatever would come afterwards wouldn’t be as good. As soon as I relinquished that thought, and as soon as I gave up that feeling and control, the songs started coming a lot easier. As soon as I stopped giving a shit whether the record was going to be good to anyone, that’s when I really got to get in touch with myself and made a record I was super proud of. I think that has kind of happened with every record we have done, except for the first and second. Having a catalog to try to measure up your next record with, it’s useless to think that way for me. I have to approach every song now with a fresh start.

You’ve mentioned that you can’t control the way you write songs. Do you feel you are a conduit for something greater?

I think so, but where it comes from for me is, I think about songs like drawing a picture. When I draw a picture, I’ll take prompts from my girlfriend and little brother. I’ll say, “Hey! Give me something to draw!” That’s a game that me and my brother both play. We think of weird things and challenge each other to draw them. My girlfriend asked me to draw a hippo wearing a sweater the other day. My drawing of a Hippo wearing a sweater turned out to be a hippo, with kind of a big body wearing a nice Christmas sweater and a pair of human legs. I don’t know how to draw hippo legs. I kind of ran out of patience trying to get it exact. Then I modeled the legs after my own legs, which have a bunch of scars on them from skating accidents over the years. My drawing of a hippo wearing a sweater has human legs with scars, with a little spec of water running down the leg from where I just got hit by a skateboard. [Laughs] I’m getting somewhere with this. When I try to write a song, I’ll try as hard as I can to write a song that I have in mind, but the only thing that makes it myself is when I give up on making it perfect and just make it something that I could do, that turns out to be unique to me. Whether it is a conduit thing, or songs are just up in the air waiting to hit people’s heads like a lightning bolt and get them to write them, or it’s kind of me just sketching out the best I can.

Does the dark sense of humor in your lyrics come from working for the Suicide Hotline and as a social worker, or was it always there?

I come from a very morbid family. I think I have always kind of had that sense of humor. However, that may have guided me into the lines of work I am in. They may also serve as strengths, coping mechanisms now, even though they didn’t start out that way.

Your songs are like a lyrical treasure hunt. You throw out obscure references and encourage people to go Google them…

I like making references. I think it comes from being a long time rap and hip hop listener. I appreciate things like callbacks and samples and little references to stuff people might understand. If they don’t, it’s just part of the poetry. I think that’s where it comes from. One thing I am encouraging people to Google is the album title Christmas Island. I’m consciously not telling people what it’s about.

Do you like your songs to remain cryptic, or do you mind telling people what they are about?

I prefer leaving it cryptic, or doing it interpersonally if someone asks me in person. I’m pretty happy to oblige. I think I do prefer [keeping] it cryptic.

Have you always been an artist? When is the first time you remember creating something?

[Laughs] I’m finally comfortable with the term “artist,” I think, after 10 years of being in a band. I always wanted to be an artist. I think when I became one, I was shy to adopt that term. I guess I still kind of am. I think drawing is the thing I have been doing the longest that is kind of creative. [To answer the second questions], banging on my mom’s piano when I was a kid… I’ve always really liked performing. I was doing theater and juggling at talent shows.

You guys create wonderful music videos. How important is the visual aesthetic to the musical component?

It’s a lot more important than it used to be. With the last record, we made our first two official music videos that Andrew Stewart [formerly of] Against Me directed. We did those with zero budget whatsoever. Go to the costume shop and make a video later. That was really fun. I think now it is more important to come up with cool music videos and just kind of spread it around across different mediums. We commissioned Suzanne Faulk to paint the album cover. In the past, we have gotten good people to do the art, but this was a new level kind of thing with hiring a really well known fine artist.

You’ve done so much in the last 10 years. What you as a boy would think of the man you have become? What kind of advice would you give him?

I think I would be pretty stoked on myself. I think 18 year-old Sean would be a fan of 28 year-old Sean. I think if could give myself advice, I wouldn’t have turned out. There are plenty of things I’d love to give 18 year-old Sean advice on, but I think at this point, all the lessons I learned really hard and really well.

You guys are already a successful band, but Christmas Island may take you to that next level. How do you prepare yourself for that ride?

Huh. I think I’d rather be unprepared. I have no idea what is coming up. I don’t want to get my expectations too high, but I don’t want to set them too low, either. I’m excited for it to smack straight into me.

Get your hands on the AJJ cover of Issue #10 by clicking the image below! 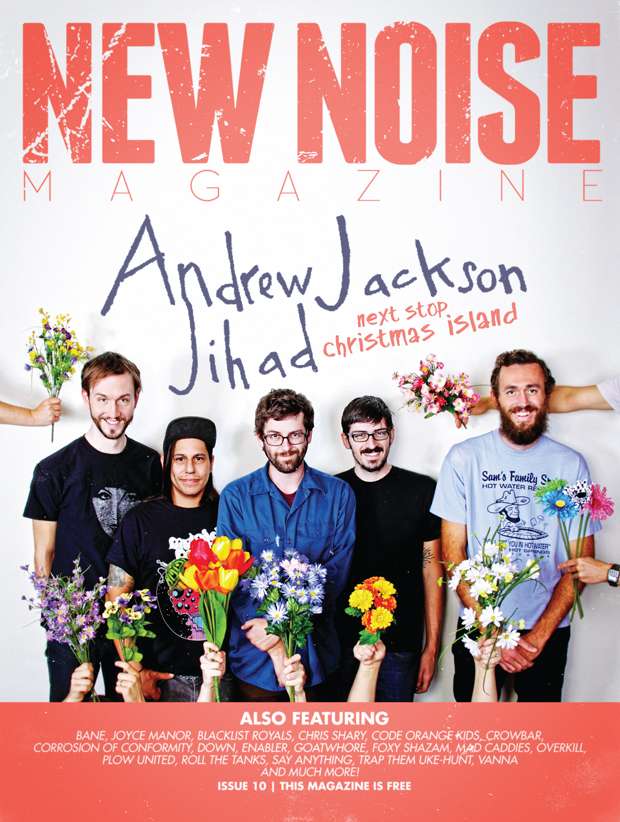 PrevInterview: Agalloch Talks About ‘The Serpent & The Sphere’
Interview: Sworn Enemy Talks About The Old School Sound Of Their New AlbumNext