Interview: The Atlas Moth Talks About ‘The Old Believer’

Chicago’s The Atlas Moth continue to be one of the bolder, freer thinking outfits in rock with their third full-length release The Old Believer on Profound Lore Records. This record is a post-metal must-hear in 2014, a complete experience that will seep into even your deepest dreams.

How does it feel to be at this juncture with the Atlas Moth?

It’s a trip, for sure. We all basically gave up on having regular lives to do this band full time. There were a lot of dark times – both personally and within the band – during the last eight years, but we never gave up on this. It’s always something we have believed in, and it’s incredible to see the hard work we have put into this pay off like it has. We are far from where we want to be, but it’s a great time to be in The Atlas Moth right now.

How does The Old Believer represent your journey as a band?

We have been through an incredible amount of turmoil since we started this band. Matter of fact, when I initially started this band with our old drummer, it was born out of turmoil and complete upheaval. I feel like all that has happened between An Ache for the Distance and The Old Believer brought us to this point, though, and I feel like we have delivered our most personal record yet. It was very cathartic for us.

What inspired the cover art that changes in water? Does it get funky after it dries off? 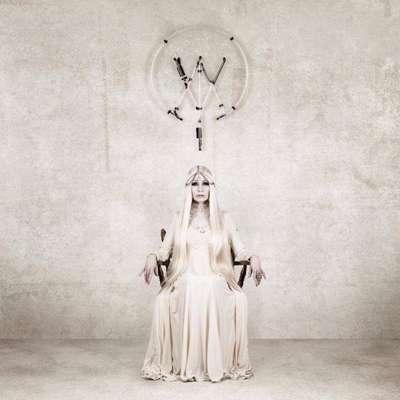 It came from Storm Thorgerson’s artwork for Zeppelin’s In Through the Out Door. That cover, unbeknownst to most, changed from a sepia tone image to full color with water. I got in touch with the pressing plant that does all of PFL’s releases, and we tried to track down that particular paper stock, but we stumbled upon the one we used and thought it was even cooler. It actually dries back up nicely, and can be used over and over.

You’ve said you “found yourselves” as a band on An Ache For The Distance. Do you feel like you pretty much know what you want from the Atlas Moth now or are you still going to throw curveballs as the muse dictates?

We have never walked into writing sessions and said, “I want to try to write a song like name-band-here”. We have always been the kinda of band who just let this flow and do what felt natural. Sometimes shit works, sometimes it doesn’t but we don’t put any limitations on what we write. With Ache came a lot of confidence in who we are and what we do best and I think that shines through the most on The Old Believer.

There are many wonderful guests on this record. How did they become involved?

Well, [guitarist] Marcus [Eliopulos] from Stabbing Westward is actually [guitarist and synth player] Andrew [Ragin]’s brother in law. When Andrew had to sit out a few short tours we did in 2012, Marcus actually filled in for him. He’s been a friend of ours for a long time, and it was a no brainer for us to have him play on the record. Not to mention, he’s pretty much an honorary member of the band. Subrosa put out a record last year that we all loved to death, and when the thought of having a string section on the record came up, they were an obvious choice. Bruce Lamont [from Yakuza] is another old friend from Chicago, and it’s actually pretty shocking he HASN’T made an appearance on one of our records yet. We made friends with the Gojira crew when we toured with them last year as well, and they are very supportive of what we do. They handpicked us to open that tour, and it was an honor to play with them every night. When they were on tour with Slayer last fall, it just happened to fall right when we were recording. So we invited them and their entire crew back to the studio Andrew works out of, and had a party/recording session.

Are you excited to tour with Boris and SubRosa?

We have actually tried to tour with Boris for a few years now, and it has finally come to fruition, so we are super excited to finally be out with them. SubRosa are friends of ours, and it’s great to see them finally make it out to the East Coast. I don’t think they ever have. It’s awesome to have them along for the trek with us!

You started a record label, correct?

Yes, I did! Last year, a couple friends of mine, Rob and John McKinney, joked around about starting a label so we could get free records. At the moment, I’d say that it’s more for fun and we’ll see how it works out in the future, but we plan to release some rad records this year. The only thing currently on our slate is The Proselyte, a super rad band from Boston. Everyone should check them out. I’ve been a huge fan since we first met them way back in 2011, and they keep getting better and better.

The lyrics about “Mother Ayahuasca” from “Sacred Vine” are powerful. Is “save me from my own demise” about tripping as an acceptance of death?

I tend to lean more towards the acceptance of life, rather than death. All of my hallucinogenic experiences made me wake up the next day feeling like a new man.

Was it hard to record these vocals, since they are so emotional?

This was definitely a hard album to record and write. It’s very, very personal, and references a lot of really hard times we suffered through since we put out our last record. I definitely had a hard time recording some of the vocals, as it was really hard to keep my composure a lot of the time. Listening to it now, I feel like the experience was great for me. It helped me out in one of the darkest times of my entire life, and my hope is that someone else who is going through a hard time can spin the record and get something out of it too. That would be the ultimate victory with this record.