Interview: Autopsy Loads Up On ‘Tourniquets, Hacksaws and Graves’

Interview with drummer and vocalist Chris Reifert | By Brandon Ringo

If someone constructed a hall of fame for extreme metal, the death metal wing would have a section roped off for the band Autopsy. Formed over 25 years ago, the band has had a very interesting history, including three untouchable albums between 1989 and 1992, a 14-year hiatus, two perfect albums in 2011 and 2013, and now a third perfect album coming out in 2014. The new record Tourniquets, Hacksaws and Graves is hot on the heels of 2013’s The Headless Ritual and showcases yet again the brutal, unrelenting force that continues to separate Autopsy from their death metal contemporaries.

It feels like The Headless Ritual only came out a few months ago. At what point after that album’s release did you guys begin the writing process for Tourniquets, Hacksaws and Graves?

Hard to believe, but it’s been almost a year already. That’s pretty normal for us and used to be standard for most bands. We had a good chunk of stuff written at the same time as Headless and we came up with the rest before September of last year. As long as inspiration is knocking at our skulls, we might as well open the door, ya know?

What led to your decision to put out another new record with such a quick turnaround?

Again, that’s always been normal for us, one release per year. Except for when we were split up of course, but even then, things were active with the first DVD and a couple of comp/live releases. With all the technology today, it’s easier than ever for bands to make albums as quickly as they want, but ironically you see it taking several years between each release. Go figure.

Are any of the songs on Tourniquets left over from other recording/writing sessions of other albums or are they all basically brand new?

Some stuff was actually recorded in the same session as Headless. We went in with too much material and figured we’d just pick the 10 songs that went best together for that particular album and save the rest to be finished for the next album, which turned out to be Tourniquets. It was really cool how it worked out. We had a handful of stuff to put the finishing touches on and we wrote and banged out a few more cuts to complete the puzzle. Since it was all done in the same studio with Adam at the helm, they all go seamlessly together and there’s no way to tell what was recorded when. That part doesn’t matter, anyways. The end result is our best album yet in our quasi-humble opinions. [Laughs] Of course, we feel that way every time we create something and that’s how it should always be. We’re constantly on a mission to do our absolute best and make the most crushing music we can vomit forth. As far as anyone is concerned who wasn’t there with us in the studio, it’s all brand new and we were quite sneaky about it. We didn’t tell anyone what we were doing.

It kind of sounds like Tourniquets, and even Headless Ritual, are very fast, old school, and similar to records like Severed Survival and Mental Funeral. Was it your intention to give them that sort of old school feel or was that organic?

We just did what we’ve always done, plain and simple, create sick and heavy death metal. We’ve never ever sat down and said, “Let’s make an album that sounds like Severed or Mental,” or whatever. We write stuff that we like to listen to, that’s the main thing. And as usual, there’s speedy ripping stuff, slow doomy stuff, and other tempos, and that sort of thing. We like to keep things interesting for ourselves, and hopefully others, so we don’t just stick with one pace or formula. There’s room to twist and turn things, but it’s gotta be brutal, dark, and bone crushing.

When looking back on the writing process of your first three records in comparison to the last three, have you noticed any similarities or differences in approach that have helped keep your sound so consistently, absurdly brutal despite the gap in years between the two eras?

Our writing process is so simple and has never changed. If it’s me working on a song, I’ll sit around at home and fuck with it ‘til it feels done, then I’ll bring it into the jam room and go, “Hey, here’s my new song, let’s learn it.” That’s it. Same goes for the other guys. Whoever has something written brings it to the rest of the guys and we hammer it out and learn it.

It all starts with one person sitting at home with a guitar. No rocket science there, really.

As someone who has been writing consistently violent and gory lyrics for almost 30 years, do you ever struggle to come up with lyrical concepts for new songs? If so, what are some ways that you’ve found to help break your writer’s block?

Nah, there’s no shortage of weird ideas floating around in the ol’ brainbag. Not yet, anyways.

Since releasing Macabre Eternal four years ago, you guys have released an album each year. Do you feel that you’ll be able to continue releasing albums at such a prolific rate?

Nothing we do is planned very far in advance. We’re usually just going with the feel of things. I can’t speak for other bands, but there’s no way we can predict things, so we don’t bother. If we’re enjoying ourselves with this ugly noise, then we keep at it. If we can all find the same night when we can get together for a practice, that’s good enough. [Laughs]

As far as touring goes, you guys don’t seem to do any big package tours. Is there a reason why you keep your live shows so sporadic?

We don’t tour at all to be more precise. The last time we did that was in ’93 and it destroyed the band, so no thank you. A really noteworthy gig from time to time is more up our alley. It keeps things more special and also allows us to keep our home lives intact, which in turn keeps us somewhat sane. I think those are pretty good reasons.

Get your hands on Tourniquets, Hacksaws and Graves here:
https://www.burningshed.com/store/peaceville/collection/225/ 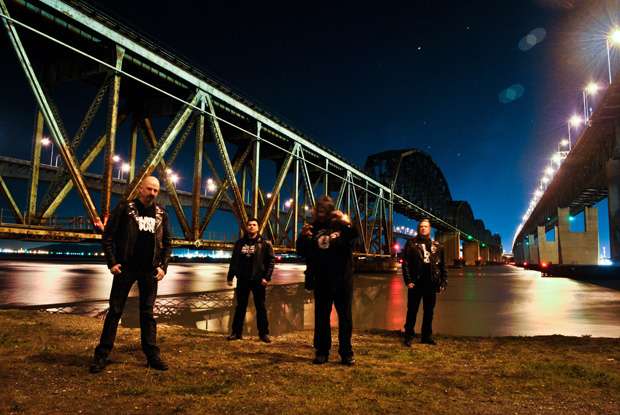 PrevInterview: Diabulus In Musica On Tough Times And Climbing Out Of The Darkness
Label Spotlight: Dr. Strange RecordsNext