Interview: Little Big League on their founding and recording in unheated warehouses in winter

Just two years into being a band, Philly’s Little Big League have already coalesced their sound into one that’s bound to draw attention from crusty punks and trendy Indie rockers alike.

Their 2012 7” was impressive, but it’s their debut, These Are Good People, that what will solidify their rep as one of the most promising new bands to come out of the northeast in years. Comprised of former members of Titus Andronicus, Post Post and Strand of Oakes, the band is made up of Michelle Zauner (vocals/guitar), Deven Craige (bass), Kevin O’Halloran (guitar) and Ian Dykstra (drums).

We caught up with the Little Big league weeks before the record came out to discuss the group’s founding, recording in an unheated warehouse in the dead of winter and back masking bad jokes.

How did the band first get together?

Craige: I met Michelle and Kevin through their old band Post Post. The band I was in at the time (Golden Ages) had played a show with those guys. Post Post broke up, and after a while so did Golden Ages. I hadn’t spoken with Michelle or Kevin since a show we had played together in New York a long while back, and even so, I didn’t really know them all that well, when kind of out of nowhere I got a message from Michelle. She was telling me about her and Kev moving into the city from the burbs and that they were looking to start a new project. In July of 2012 we started playing. Johan Dietrick, who drummed in Golden Ages with me played one show with us but left to go to NYC for grad school. So we were left with a void. During this time I met Ian through a mutual friend. We found ourselves always running into each other at parties or at the bar or whatever. We had a lot of the same interests, musical and otherwise. He mentioned that he drummed and was looking to jam, so naturally I invited him to come check out my new band. Obviously it worked out; we now had what will be known as the classic original line up of Little Big League.

How did you guys first connect with Will and Chuck at Tiny Engines?

Craige: When we finished the record up, I think it was sometime in February or early March we started to pass it along to some close friends, trying to get it into the hands and ears of different labels.  I sent it over to Jeff Meyers (Belgrade/Ma Jolie). I’ve known Jeff for a long time; we actually grew up in the same town. I knew he worked with Will and Chuck through Beartrap so I just asked him to take a listen and if he liked it, to pass it along to Tiny Engines. I remember getting a text from Jeff saying he passed it along, and maybe an hour or so later getting an email from Will saying he dug the record!

Can you talk about some of the band’s influences?

Craige: These questions are always tough to answer. Ian, Kevin and myself all have punk/pop punk and hardcore backgrounds, but listen to pretty much everything now. Michelle always listened to more indie stuff. These are some bands that we all like that I think one way or another work there vibes into our songs: Built to Spill, The Replacements, Modest Mouse, Saves the Day, Dinosaur Jr., and tons others that my brain is just blanking on. All I know is that we make music where we can play a show with someone like Ceremony and then go play with someone like Strand of Oaks; polar opposite bands, and somehow fit on both bills. 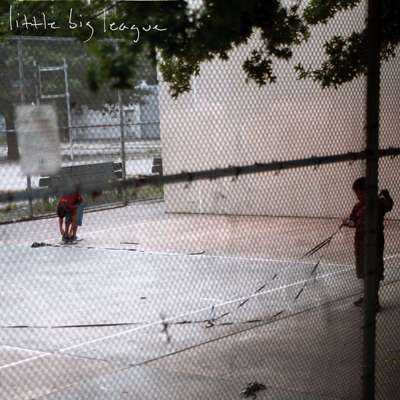 What can you tell me about the pic on the cover of the record?

Dykstra: I took that photo on an afternoon in Brooklyn. I think we were walking to get pizza before a show. Those two kids were running around on a tennis court with long strands of VHS tape, kind of throwing it up in the wind and spreading it all around. No one was really watching them and it just seemed like they were totally left to their own devices. I developed the film probably a few months later and when Michelle saw it she kind of latched onto it right away. The image just makes me think about being carefree and playful in a really innocent way, and I started to associate it with one of Michelle’s lyrics about hearing kids screaming on a playground from her house. Me and Michelle live by that elementary school, and watching the kids interact and play whiffle ball after school just makes me think about how they’re totally innocent like that but also how they’re really cruel to each other at the same time. It seemed like a fitting cover to me.

Have you noticed a big change in your sound since that first 7″ and These Are Good People?

Zauner: Yes and no. I think all four members of the band have pretty consistently maintained our intuitions about things for the past year or so.  We’re still drawn to bringing out dynamics, and trying to make songs really stand out from each other. That has remained the same, despite the fact that we’d recorded our 7″ when we were a very, very young band. I think we’d only been playing together for a couple of months. The songwriting maybe got a little “harder” as well. More noise, more screaming, more energy. I started becoming more interested in writing grittier, and also started collaborating more on the writing process with the three boys who all come from “tougher” hardcore/punk backgrounds. Lyrically I also started to break out of the structures I had relied a lot on in the past. I used to only write from a very personal, often romantic space. Songwriting was usually something I used to explore the ways I felt about certain things. With a few of the songs on this record I started to use songwriting as a way of trying to understand the actions of other people by trying to embody them by writing from their perspective.

What can you tell me about some of the songs off this new record?

Zauner: For me, I think the record just kind of encompasses my experiences through the year 2011-2012 living in Philadelphia. Part of that was being a small town kid from the west coast (Eugene, OR), moving from my college in the suburbs into a city where people were constantly telling me these horror stories of women getting raped, and feeling really terrified and trapped by that. My aunt, who was basically like a second mother to me, died of colon cancer on Valentine’s Day of that year, which was probably the hugest influence on the record. It is sort of this really cruel joke because she died at the age of 49 without ever having been on a date. She was just kind of above it, I guess. She’d never been in love. At the time, I was very angry at the human body, I think. I think a lot of the lyrical imagery revolves around trying to express this sense of violent femininity. Like, why am I cursed with this body that releases fear in me every time I walk down the street? How did this physical growth take over such a good person?

Where did you record this one?

Zauner: We recorded it on the first floor of the Berks Warehouse, at our friend Craig Hendrix’s living/studio space called Cementanental. Berks is a big warehouse space in Fishtown/Kensington (PA) where a bunch of artist/musician/weirdo kids – which includes most of our friends and Deven – live. It was a quirky but totally lovable experience. Sometimes we’d have to stop tracking because there was a wood shop right above it and the mics would pick up a hacksaw that was running. Also it was December and there was no heater in the warehouse, so any time I wasn’t up to record a part I was usually huddled by a fire place beckoning the houses’ psychotic pit bull to cuddle up and keep me warm. It was an exhausting but really thrilling 10 days of straight 12-14 hour work days. We decided to work with Craig Hendrix, who also plays in this really great band called Auctioneer, because we wanted to work with someone we felt really comfortable with. It being our first record as a band (and I believe for at least 3/4 of us, the first real full-length any of us had ever worked on personally) we wanted someone to give us the space to discover how we wanted to represent ourselves. My big thing was I want to be able to feel comfortable asking questions that might sound really stupid. I feel like that’s what I really needed to benefit from recording a full-length. It seemed like it would be a waste to drop a bunch of money on some really fancy hot-shot. I didn’t want to have a “Guitar Center experience” in which I had to pretend to know shit about gear and presets and microphones or whatever. I didn’t want to waste time being scared into saying stuff like “oh ya, that X&892 is sounding real WARM.” With Craig I was able to say stuff like “can you bring up the diva in my headphones?” or “So I should play the note that’s so moody it makes me feel like I’m PMS-ing every phrase in the bridge, or every other one?” and we would just go with it. Some of my favorite parts of the record happened while we were just goofing off or acting in the moment, and that was because we felt comfortable with each other. For instance, the “hoo-hoo” backup vocals in “My Very Own You” were just Craig singing along in the moment from the microphone he used to talk to me in the vocal booth. And set deep in part of the “Sportswriting” noise storm is a stray recording of me laughing/making some dumb joke played in reverse that we kept in because it wound up adding a really nice texture to the intro.

What’s next for the band?

Dykstra: We’re really excited to go back on tour and to share the record with people. We’ll also be playing at FEST in Gainesville in October which SO many great bands are playing, and we’ll be doing a humongous tour on the way there too, and we’ll be going to a lot of places we’ve never been to. In the meantime we’re working on new songs which we’re really excited about. I think we’re honing in more on our sound and are getting better at writing collaboratively and building on each other’s ideas. Definitely excited to go back into the studio together. 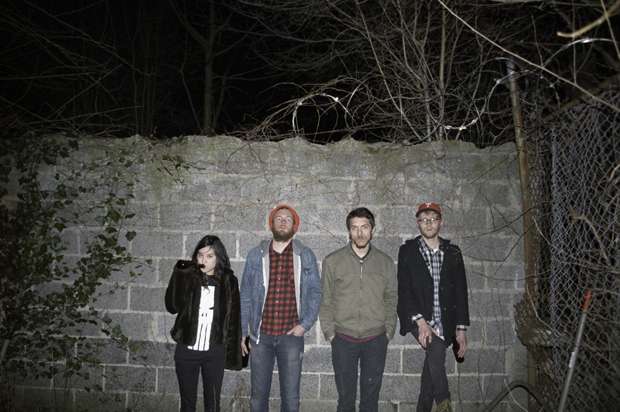