Interview: You Blew It! Talks About the Rise, Fall, and Future of Emo

You Blew It!, a young band from Orlando, FL heavily influenced by 90s Midwestern emo, made a big splash with last year’s Grow Up, Dude. Their new record, Keep Doing What You’re Doing, is one of the first offering of the year on Topshelf Records.

You recently released a song off of the new record called “Award of the Year Award.” So many places are streaming it, which is pretty awesome. Can you just tell me a little bit about the song and why it was the first one you released?

I think that one was one of the first ones we wrote for the record. It was the first full band song where we actually got together and wrote. It’s been around forever and it kind of got stuck in our heads, so once it got there it just felt like the most natural choice. Just listening to the record and the demo ourselves, that was the one that always stuck out as a single.

You mentioned on Twitter recently that you’re making a new video and that everyone should bring costumes. Is it for that song?

Yeah, it’s for “Award of the Year.” Our friend Jeremy who did a video for Dikembe, which turned out really, really well, has access to a 360 lens. I don’t know if you saw the last Matchbox 20 video, but they use a 360 degree lens. It takes a panoramic video, obviously, and you can scroll around and look around the video- on the internet, while it’s streaming. It’s insane! We’re kind of like his guinea pigs, so we’re just giving that a shot and seeing how it turns out.

So onto the album, Keep Doing What You’re Doing you worked with Evan Weiss (Into It, Over It) and Matt Jordan. What was it like?

That was probably one of the most incredible experiences, not just for me as a musician, but as a person. You Blew It! has always kind of looked up to Evan– we’ve known each other for a long time. I think he’s a brilliant songwriter, musician and businessman. I can’t say enough good things about that guy.

So when we were finally able to go up there to record with him and Matt Jordan, everything was so smooth and fluid. It just felt incredible to meet musicians that were exactly on the same page as us and knew where we wanted to go and had suggestions for us on how to get there. I always feel like for a recording process to be super good, you have to struggle so hard or put in so many hours. It’s usually such a hard process and we’re really tired out from it. But this wasn’t like that at all. Everything was smooth and fluid. Everything. Everything just came as it came. Probably one of the best experiences I could hope for.

So you didn’t feel that kind of emotional drain that comes after recording an album?

Yeah, we felt it at some point but that was only because of the time it took. We took so much time to make sure everything was perfect and that we were happy with everything. Just the time it takes sitting in front of a computer with 4 other guys huddled around you, that’s the only thing that drained us.

On its website, Topshelf said that you’re dialing back your more raw influences in favor of something more complex on the new record. I didn’t really hear that in “Award of the Year Award.” What did they mean?

I think they meant a different kind of raw (chuckles). It’s really no secret that our main influences are bands like Cap’n Jazz and American Football and all those old Midwestern emo bands. When you listen to their records, it all sounds very thrown together. It was recorded in three days, everything’s kind of sloppy but charming in that way. That’s kind of what our recording has always been, too. We kind of got those comparisons.

But this time it’s different. They’re more referring to the raw recordings. This time we’re picking up more of a raw sound, a raw feel. It’s pretty much just guitar, bass and drums on the record. I feel like it’s probably more raw in that way. My voice hurts a lot more from singing these songs. So raw in that way, but not sonically raw, if that makes sense.

Stereogum was one of the sites that streamed ‘Award of the Year Award’ and they listed you on their “Top Bands to Know from the Emo Revival’ post and NPR just had a big emo revival story too. I know you’re not a big fan of genre labels, so what do you think of all of this?

The thing is that if you ask anyone about emo revival that emo’s been around forever. I agree, it has– but there’s kind of a communication disconnect there. I think the press covering emo revival is just using that as a term because emo is definitely way more popular now than it was 5 years ago. They’re just referring to the upsurge of all of these new bands and new records coming out that sound emo.

The thing is that I’m honestly kind of afraid. With all of the press covering it and all these people catching on, it’s creating this big bubble and eventually the bubble’s going to pop like it did 10, 15 years ago. Emo’s going to be super cool really soon. It’s going to be really sweet for everyone to catch on and name all of their favorite emo bands, and then somewhere along the line it’s going to turn into that shitty mall pop emo. Like Hot Topic emo. Emo’s going to become a curse word again when that bubble pops.

But on the other side, it’s still very cool to see our friends’ bands getting more popular and us gaining more fans just because the word emo is attached to us. So until that bubble pops, we’re going to have fun with it, support our friends, play shows and have fun.

I like that you mentioned using emo as a curse word. I’ve always been a big fan of a lot of emo bands and I remember when it was the dirtiest possible thing you could call a band. It’s kind of nice that it’s not quite that pejorative right now.

Yeah. I’m sure you know it’s making a comeback. 3 months ago people would ask what genre my band was and I hate that question because I have to say “emo.” And when I say emo, they get that look like “Is this guy joking? Is he trying to be funny?” Now it’s starting to turn around into what the word emo was in the mid 90s. 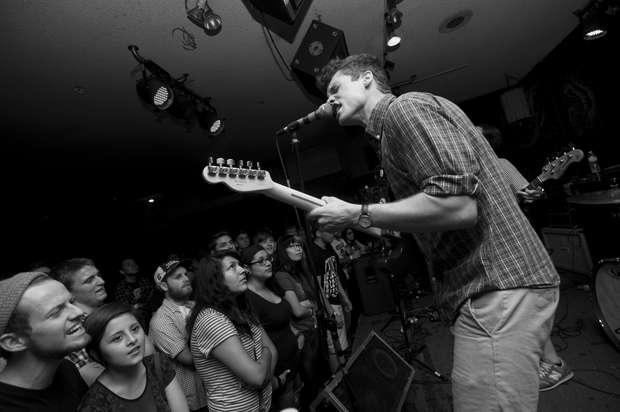 Shifting gears a bit, tell me about that South by Midwest comp you’re on. I know the proceeds go to Habitat for Humanity, but don’t know much beyond that.

It’s a great cause and we’re stoked to be on it. Our friend Slate in the band Look Mexico runs a label called Holy Hell Records and I what he was going for is that a lot of these emo bands are mainly from the Northeast and Midwest, but there’s a lot of really good music down here in Florida and Texas. I think he’s just trying to expose all of those bands. We know from firsthand experience that bands from down here don’t get a lot of exposure or attention just because they have the South connected to their names.

So, last question. You’re touring this winter. You’re going to be emerging from Florida where it will be 70 degrees into a barren, snowy wasteland. How do you prepare for that, mentally, emotionally and physically?

(Laughs) Dude, I don’t even know. The first winter tour we went on was on the East coast right during a blizzard, so we were driving through ice and stuff but it still wasn’t super cold. It was in the 20s and 30s, which is still fucking frigid for Florida boys, but I’m looking at the weather right now but it’s 6 and -10 where we’re going. I think there’s two feet of snow predicted for when we’re going to be in Denver, so  I have no idea. We’re going to put snow tires on the van, but outside of that I guess we’re just going to see how it goes and try to not die.

Yeah dude, thanks for being The Dude!

PrevInterview: Shrapnel Talk About Non-Musical Influences and What’s Next on Their Agenda
Interview: Otargos Talk About Cosmic Cataclysms and Warhammer 40kNext