Interview with Bradley Bell of Chiodos: Getting Bruised On Tour

I had the pleasure of sitting down with Bradley Bell, the man behind the keyboards, piano, synthesizers, programming, and backing vocals of Chiodos, earlier this week before their show at the House of Blues in West Hollywood in Los Angeles, CA. I was happy to join my friend and photographer, Anthony King to cover the show, who captured some really stellar shots of their set that evening (see below).

Bradley was very kind and relatively calm for a guy who goes totally nuts on stage; his long hair, usually found flying back and forth as he plays, was tied up into a neat bun. We discussed the current tour and the recording process for their first release with original members Craig Owens (vocals) and Derrick Frost (drums) back, and the addition of guitarist Thomas Erak (The Fall of Troy), Devil, just released on April 1, 2014 through Razor & Tie.

What has been the best show so far on this tour in support of your new album, Devil?

Let’s see… there’s been a few that have been really cool so far. Our drummer Derrick is from San Antonio so playing in his hometown was really cool. It was incredibly hot and sweaty. A lot of the venues on this tour haven’t had a barricade so we have been swamped with crowd surfers and people trying to stage dive and stuff, so that’s been fun.

Do you like the crowd involvement? Does it get frustrating sometimes if fans get out of hand?

Yeah, if they like knock over your instrument or something like that. There’s this new trend of people getting on stage and taking a selfie – like what are you doing? You look stupid right now trying to take a selfie. Just get up there and jump back down!

I’ve seen bands take selfies on stage with the crowd in the background. I could see that flying more often.

Yeah that makes more sense for social networking and things like that.

Yeah, Pomona was pretty cool last night but I guess my favorite show was probably in Arizona because we’ve never really had a really impressive Arizona show before and this one really blew us away. Everyone went nuts, it was crazy. Everyone was wrecked and into the new album, so that’s exciting.

That’s awesome! It just came out on April 1st so it’s only been about a month to gauge the reaction to it and it has been pretty good so far, huh?

Yeah! It’s been really good. The old fan’s reception and new… we’ve been doing meet and greets and stuff like that and we’re noticing a lot of people who are like “Oh I just heard you guys when this album came out”. It’s kinda cool to see it all come full circle and everyone enjoying it together. We’ll even notice people singing along to more of the new songs live and not the old songs, which is weird because we’ve been a band for so long, and have such diehard fans that it’s weird to see so many singing that single. Before the album even came out, they were even singing along to “Ole Fishlips Is Dead Now”.

The band morale must have improved. I’m sure you’ve been asked this a million times over, but with this being the first full-length studio record with both original members Craig and Derrick back on board, how awesome is that? Do you feel like the bond is a lot stronger now?

Yeah, yeah… I’ll give you the rundown of how it all came about. When we first got back together, it was just for reunion shows and that, you know… at that point, we had played these shows and everyone was going crazy and it made us really excited so we wanted to keep booking shows. As they started to become a more common thing, we started talking about making a record together. We took it at a very slow pace, like getting into a pool when it’s too cold, you know, you start off with a couple steps instead of just cannonballing in and regretting it afterwards. 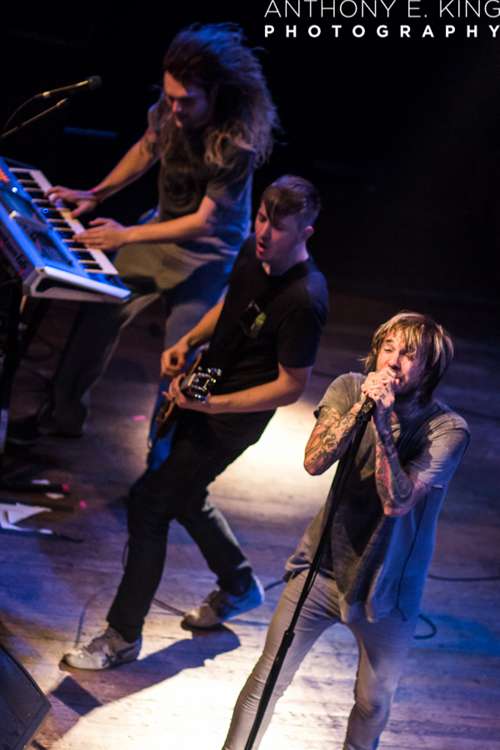 Yeah, it was real ugly. We didn’t talk for years.

The first time I saw you guys was in 2004 or 2005… I feel like I’ve seen so much happen over the last 10 years from the outside and seeing this band grow. I listened to All’s Well That End’s Well when I was a junior in high school. It’s been pretty surreal to see the band grow as I’ve grown up as well. I was almost shocked and surprised when I found out Craig was coming back after D.R.U.G.S. but I guess at the same time… it was probably gonna happen at some point if it was meant to be.

Well, we grew up playing music together in high school. There’s four of us from Michigan that went to high school together, so we wanted to make sure that we ended it all on a good note and not have this bitter energy out there that everyone was surrounding us with.

Yeah, I feel that that was being perpetuated by media as well.

I mean, when Craig first met up… it was holy shit like what’s gonna happen? Are we gonna fight? It was totally cool… slightly awkward for both of us at first and then we start talking and it all felt so natural again. WIth this record, we were able to have the power of control this time, we didn’t have a record label forcing us to go on all these tours and not giving us enough time to focus on writing a record, and we were able to take it at our own pace. We probably spent about 10 months writing the new record and with our past records, we would go in with like half of written, maybe five songs, and…

Figure it out as you go?

Yeah pretty much; it’s like someone is tracking and someone is writing in the other room. Continuous cycle and that will stress you out! Working with your back up against the wall often produces great things, you know, but it was a lot more comfortable this way and made a lot more sense that way it allowed us to actually work on our relationships again and make sure we did it right this time instead of just stressing each other out and not getting along for the process. So we were able to enter the studio in September and be fully prepared with over 20 songs. We had time to choose what really made sense together that’s what made this album a lot different and easier for us all to get behind.

Working under pressure can definitely help you or hurt you a lot!

Back in 2007, we were always on the run playing shows and trying to build our fan base, we were getting offered all these new tour offers because of so much buzz so we didn’t really have time to just chill out and write. We were pretty much just forced into the studio straight off of tour and it didn’t make sense but we made it work.

It obviously did work because you built the fan base you have today!

I know your days off are probably a little fewer and far between with this busy tour, but when you have the opportunity for a day off, what is your go to thing to do? Are you guys trying to stay fit on the road? I’m always hearing of bands trying to find ways to eat right and stay in shape on the road.

[Laughs] We try to. There’s only a few of us that work out… tomorrow is a day off so I’ll probably go hiking.

Yeah I’ll usually work out, maybe a little day drinking, and try to get to bed early.

Do you have a favorite song on Devil?

It changes a lot.

Maybe one with more of a personal meaning to you?

Probably the last track on the album, “I Am Everything That’s Normal”. The way it came out was really interesting. It was a completely different song and when we went to the studio to record we only kept one part and decided to scrap the rest and completely rebuilt it into a whole different thing. We were trying to go for more of a Queen “Bohemian Rhapsody” vibe, with a big long piano build up into a mechanical sounding thing, so that’s how it musically came about. When Craig and I were writing it, we had an idea it would be the last song on the album and we really wanted to wrap up the message of all of the things we were saying so we created this parallel of a relationship between a guy and a girl or so it seems, but really it’s about the band getting back together and really trying to work on our relationship this time and do things right.

A different kind of break up. Well, I’m sure many will be able to take something from it or relate to it in a personal way even if it isn’t really about romantic relationships. That’s the nice thing about music…

Exactly. To each their own, it’s relative to your own personal situation and that’s what people connect to and that’s a beautiful thing.

Your role in the band is a huge part of the Chiodos sound. Do you feel like your writing style as keyboardist has changed or evolved recently now that Craig is back?

It was just so good to work with him, me and him hands on writing a lot of the vocal stuff. He would always give me input on what I was playing on the piano, so it was good to have that back around. I feel like it’s got a better vibe… symphonically…just between me and him working together again. We’re really just trying to create like, the most sonically… songs that would make sense! Doing that sometimes you have to take a step back, each person has to learn certain parts of the song in order for them shine in other parts, when before it was just like everybody soloing at the same time. We’ve grown a bunch in that way. I think it made a big difference in the song writing.

Sounds like this reformation is a beautiful thing. One more question… any crazy road stories on this tour?

Haha I guess so, we’ve all been really sick on and off… I think I started it… I came on tour with a bug or something and passed it around.

Close quarters, what are you gonna do? Emergen-C!

We were drinking quite a bit at this festival in Jacksonville, Florida with an open bar last week and we started playing punch for punch… there were like 3 of them, they were all doing it. I woke up the next day with this bruise, and now days later, it has grown and grown and grown… [He lifts his sleeve to reveal a huge arm bruise, evident that he got punched in the arm MANY times.]

Whoa, Chiodos Fight Club! No way dude. [laughs] I like the color of bruises though, actually. They can be pretty. Sometimes they look like little galaxies. I have a huge one on my leg too, but that’s just because I’m clumsy. That’s an awesome bruise though, we should probably take a photo of it for posterity. 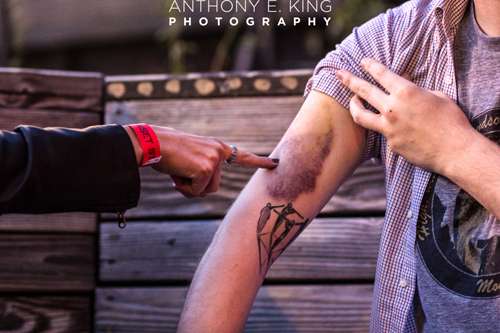 Get your hands on Devil here: http://razorandtie.merchnow.com/catalogs/Chiodos

PrevInterview: Catching Up With The Shrine
Interview: The Boids Reminisce On Their RootsNext