Interview with guitarist Torsten Ihlenfeld | By Eric May

Germany is known for cranking out memorable power metal, and Brainstorm is one of their strongest outputs yet. The band is prolific, with Metus Mortis, Ambiguity and Soul Deceiver among their finest releases. The band’s newest release sits on the same throne as those greats. Firesoul comes packed with some of the best power metal I’ve heard in years. Guitarist Torsten Ihlenfeld seems just as excited as he discusses the album and some of its lyrical concepts, as well as touring and his personal beliefs.

What were your goals for this record?

Firesoul definitely breathes the vibes of [our previous] albums. This was not planned or set out as “songwriting goal,” it just happened. But we felt during the songwriting process that the new songs and the atmosphere during the rehearsals felt like they did back in the old days.

Where did you record Firesoul? What was the atmosphere like? 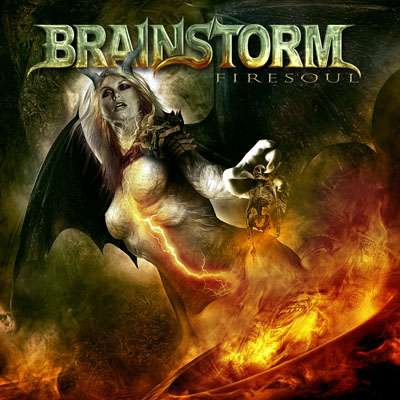 We recorded Firesoul in different studios, as usual the pre-production and later on, the guitar and bass recordings took place in our own StormYourBrain Studios, while the drums have this time been recorded in the famous House Of Music Studios with its BIG drum recording room, that gives you the extra “room” and “sound” for the drums. Vocals have been recorded in the lovely U3 Studios in Stuttgart, and piano and additional keys have been recorded in the well known Gate Studios in Wolfsburg. The atmosphere was incredible and, as already mentioned above, the vibes could not have been better and reminded us a lot of how it was 10 years ago. Of course, [since] he is one of the best producers to work with. Achim Köhler pushed everything additionally to the maximum. He also worked with us on Metus Mortis, Soul Temptation, and Liquid Monster.

What is the theme behind this album? What are some of the strongest songs?

Lyrically, we have different themes. Things that we think need to be talked about. The title track “Firesoul,” for example, shows a TV preacher who is trying to escape his own ideology, but is forced to “preach” the false words by his own followers. For me, there are many outstanding songs on Firesoul but, of course, the title track or “Erased by the Dark,” “Entering Solitude,” “Recall the Real,” “Shadowseeker,” and “…And I Wonder” are some of the strongest tracks.

What tracks on this record are you going to play live?

We already did some special album release shows where we played the whole album live for our fans. This is something very special and, of course, you cannot do that during a regular tour or a festival, but for us, it helped a lot in sorting out what songs would work live and which songs are more studio songs. We will definitely play “Erased by the Dark,” “Firesoul,” “Entering Solitude,” “Recall the Real,” “Shadowseeker,” and “…And I wonder” in future live shows.

Will you talk about the orchestration on the album?

Orchestration or orchestral parts have always been part of the Brainstorm sound on at least one or two songs on [each] album. We love using classical elements or just adding a piano and strings to some of our songs to give them the extra atmosphere when needed.

On the Wacken 2004 DVD, you were a bit younger, wearing a black shirt with “666” on the front. How have you and the band changed since those days?

[Laughs] That was [vocalist] Andy [B. Franck] wearing that shirt. Well, I don’t think that we are the “most evil” band on the planet, but we love to play with clichés and stereotypes sometimes. And I don’t think that I am disclosing a secret when I say that we prefer to have fun on and off stage, and in life in general, much more than trying to look evil. Life is hard enough these days and we are very thankful being able to play music, tour the world, and help people have a good time while listening to our music.

Would you explain the meaning behind “Erased by the Dark,” “Recall the Real,” “Shadowseeker,” “The Chosen,” and “…And I Wonder”?

“Erased By The Dark” is taking over your own ego that gets erased; it’s about people living an illusion and subordinating everything for this illusion. “Recall the Real” is all about being thankful that there are people who are here for you and for each other, especially when you need help. “Shadowseeker” is about people who make their living in shady business, but in general, it is about negligence and neglect of today’s society. “The Chosen” is very positive I think, and about [how] every single human being [is] someone special. “…And I Wonder” is all about the search for a soulmate and if there are any.

What are your beliefs? Your thoughts about religion and spirituality?

We believe in the good of mankind, like a higher power (whatever that will be), and that there is something after life on earth. Religion can give people strength, but in the wrong hands, it can cause harm and pain. So in recalling “Firesoul,” be aware that there can be false idols teaching the wrong ways. Spirituality is much less definable, but I like people who call themselves “spiritual.” It’s more of a universal thing for me, more about things that are not concrete but give you a good feeling. What heals helps, so to say!

What are your influences as a band?

Influences back in the day have been Judas Priest, Iron Maiden, Black Sabbath, Van Halen, AC/DC, and the fun and love of making music, as this [was] part of our lives before we even started the band.

What are some of your most memorable tours and who have you been fortunate enough to meet and play with?

Almost every tour was memorable, as this is what we love to do most – playing live. But the first tour we ever did back in 1997 through Germany, Austria, and Switzerland, driving by ourselves in a camper while doing merch and playing shows with Morgana Lefay and Solitude Aeturnus was definitely a tour to remember. Then the first European tour in a Nightliner with Iced Earth and Sentenced in 1998, and the European tour with Armored Saint in 2000, which started in Greece with two amazing shows before Andy had to stay in the hospital because he broke his collarbone. I had to take over the lead vocals for a week to be able to play the tour from start to finish. There was also the European tour with Edguy after our first chart entry for Soul Temptation in 2004, as well as our first headlining tour for Liquid Monster in 2005. We also enjoyed playing in the U.S. for the first time in Cleveland and Atlanta in 2004, and then Mexico in 2009. There were also the co-headlining tours through Europe with Primal Fear in 2010 and 2012. So many great memories!

Do you think you’ll ever tour the U.S?

Whenever we get an offer that at least will not ruin us and would not leave our families at home without something to eat and drink while we are away touring the U.S., we would be ready to go! We love your country and it was a dream come true for all of us when we got to play the U.S. for the first time 10 years ago.

What bands are you currently listening to? Are there any promising new acts out there?

There’s so much good music around nowadays, countless great bands that play amazing music, thousands of great musicians who will never get the chance to experience what we are so lucky and privileged to experience. I listen to many of them, but actually (and often after the release of a new album) I prefer listening to classic metal and rock albums while doing interviews. Right now, I have been listening to Dio. Earlier today, I listened to some Rainbow, Judas Priest, and Black Sabbath’s Headless Cross.

Tell us about the live record included with the special edition of Firesoul.

We recorded the show from the Bang Your Head Festival, which was amazing, and you get a “Best Of” show with all the hits live, packaged together with the new album.

What do you do when you’re not playing metal music?

I teach students how to write songs and play metal music. Hobbies are riding motorbikes, and spending time with my family and friends.

Some say the end of days is near. Do you think we’re doomed?

I think everybody has the chance to pull through; it’s not that we are all either doomed or not doomed. We still have the chance to make the world a better place.

Finally, would you please explain “Shiva’s Tears” from Soul Temptation? I’d be very grateful to know the meaning behind the song.

Shiva’s Tears is the beginning of the trilogy “Trinity of Lust” on Soul Temptation, based somehow on the Skanda Purana [Hindu religious text] mixed with our own interpretation thereof, using many historic and also fantastic excerpts from the stories and histories of Shiva. The rudraksha tree that was born out of Shiva’s tear… But that would be a topic for a whole evening, maybe on our U.S. tour someday?

PrevInterview: The Graviators Talks About The Occult & Their Album ‘Motherload’
Interview: Braid Are Back With Their First Full-Length In 15 YearsNext