Interview: Cedar Kites Are Stepping Out of the Shadows

If you’re ever in New York I suggest you take a trip through Buffalo. Stop somewhere, get out of your car and look around you.

What is so important about Buffalo? I feel cliché about calling the town the “center of the punk revival,” but that is exactly what it is. Inside of Buffalo are numerous acts that are slowly but surely stepping out of the shadows and into our field of vision.

Among those acts are a punk band named Cedar Kites.

Founded in 2012 Cedar Kites is a punk band that was constructed for some not so obvious reasons, “We wanted to start something that was artful, emotional, and more or less wasn’t bogged down by basic genre boundaries,” says vocalist Bradley Gottorff. “We didn’t want to make single serving, labeled, homogenized art. We wanted to create something that makes you think and feel.”

The band released their demo in early 2013 and did in fact induce emotion with their music. Now, after over a year of waiting, the band recently released their newest EP, Frameworks, which is aptly named for several reasons. “The songs on the EP are about “supportive structures” not in relation to architecture, but life. Relationships, both romantic and not, emotional and societal boundaries, my family, my belief system; or more generally, what makes me, me,” says Brad. “The goal of the EP was to dissect the metaphorical house, so that I could see those support structures in their rawest forms and question them. I want the listener feel out, and dissect their life the same way when listening to the record.”

Being from Buffalo, the band is experiencing a sort of prosperity. “I think that the generalized punk community in Buffalo is a nurturing one, not only for music, but art in all its forms, and that’s the beauty of it,” continues Brad. “The punk community is growing here, but not in an elitist fashion, people here have pretty open minds and broad tastes. Being a part of that community has definitely affected us in a positive way.”

There is no doubt that Frameworks will be a favorite for many based just on the musical aspect but what lies in the lyrics tell a story and the track “Ouroboros” has a story like no other. “Greed is a huge problem in our society, big corporate machines look at people like paychecks, with only their quarterly bonus in mind. Integrity and morality are falling to the wayside in American society on their account,” says Brad. “In “Ouroboros,” I’m just trying to say that I don’t want to be a part of that hyper-efficient money hungry circle, where a life is only equivalent to the amount of units you purchase annually, and I don’t want you have to be a part of that either.”

Even though the band just released Frameworks, they are working on even more material, “We’re always working on something. Right now, we’ve just recorded some more songs with our good friend Jay Zubricky here in Buffalo, and are looking forward to their release, hopefully in the near future.”

Cedar Kites isn’t just another band from some town. They are artists in a studio creating something that they hope will have a positive effect on anyone who listens to it. 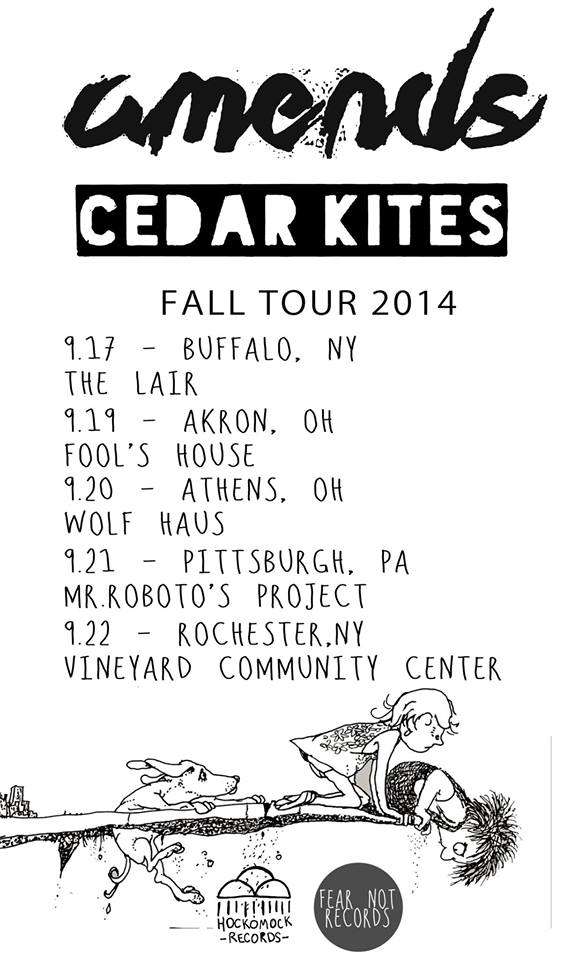