Interview: Cold World Talks About ‘How The Gods Chill’

It’s almost like they were never there. The great hardcore and hip hop legends who paved the way for what we squander today.

While that sounds very glass half empty (and I am more positive than that), there is no doubt that many people have missed the point of what these movements should be about. The social impact of hardcore and hip hop are undeniable, but somewhere along the way many people lost the plot.

Think of the impact of even recent street movements like Occupy Wall Street or think back to the early days of Hip Hop in the South Bronx or skateboarders trading hardcore mix tapes on the West Coast, bands building up a communication network for radical thought via zines and DIY shows. There is always room for more heart and soul. Listen to Mos Def’s track “The Rape Over” from the POV of big business laughing at the rappers they exploit.

“You get in the line of fire, We get the big ass checks.” Members of Bad Brains and Living Colour were on the Mos Def record The New Danger that track came from, cuz they know what’s up. My hero Chuck D just did a fire track with soul legend Mavis Staples (who has still got it and is cute as hell as a little old lady now), explaining in patient, yet frustrated tones, how even older folks who know better have just given up and become star struck by newer rappers who have content that is pretty shallow and counter productive to community movements.

My homie and I were talking the other day about what would have happend if Rick Rubin hadn’t blown up hip hop to the mainstream more via Def Jam in the 80s and it had stayed more underground, say, even ten years longer. 90s commercial hip hop was maybe so dope because it was still closer to the street. Shit, I still even bump “Remember Them Days” by Beanie Sigel with Eve sometimes.

Cold World’s new Deathwish record How The Gods Chill is not just a great hardcore and hip hop hybrid album with a Danzig referencing title. It’s almost like hitting the rest button on an old Nintendo when the game went wrong or froze up. Maybe getting back to basics may seem a cop out to some, but this is a powerful record. Sure, lots of great weird niche stuff has come out of both musical scenes over the years from Death Grips to Roguish Armament to Bahamadia or Xibalba to Killswitch to Trapped Under Ice. The bigger picture though is that while people ought to be free to choose how they live, it is still so vital that we pay attention to what really matters. Maybe it is a stretch to look at the Gaza strip breakdown of humanity but on a micro/macro level every bit of positive communication for social change may change the mind of someone for the better. It’s time to bring back the PMA and spew less hate and less greed. Does anyone need another record about killing people you hate or how people need to know that rappers would be happier with money and cars? Get motivated and unify. Know your rights, as they say. And then… chill.

Anyway, Cold World just made a great record that speaks for itself. The above are just my own two cents on the state of things. Let’s check in with Nick from the band and see how he is feeling.

What’s good? How are you guys doing today?

Hello! We’re doing okay. A little tired from playing a fest this weekend but we’ll make it.

Love this record. Has the authenticity too often missing in hip hop and hardcore these days. I like Warzone and old school Jungle Brothers, y’know? It’s gotta have that bite of reality in the songs, unless it is just some total dreamy shit for a different mood entirely. Know what I mean?

I definitely feel you on Warzone and Jungle Brothers. Authenticity is definitely a great quality in music but I try not to get too caught up in that mindset, especially with hip-hop. I may lose out on hearing something great if I keep my view too narrow.

I feel you. I just want shit to be impactful, even the fun stuff. How’d you decide you were going to use the How The Gods Chill title for the full length as well? It is such a great title. And love the artwork with the kids. Reminds me of a more Stephen King version of the art on my friend Josh Eppard’s first Weerd Science record, Friends and Nervous Breakdowns. 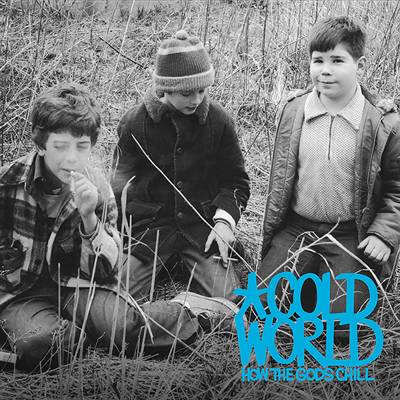 We knew we wanted that to be the title of our next LP since right after our last one came out. We did a single with Sean Price and needed a hook/title and it fit perfectly so we used it and figured it wouldn’t be a big deal if we re-used it for the LP as well. It’s obviously a take on the Danzig title. It’s a hip-hop take on a metal record that we all grew up on so it’s a title that represents the band very well. The pictures used on the layout, as well as the pictures from Dedicated to Babies Who Came Feet First, were taken by our close friend’s dad in Wilkes-Barre, PA in the 70s.

How fun is this stuff to play live? I really need to see you play. It must be such a release of real energy. The fast parts and breakdowns and vocals are thankfully respectful to what this shit is supposed to stand for.

Playing hardcore and punk live is unlike playing any other kind of music. During our set this weekend I was distracted so many times by the wild shit going on in the crowd that I flubbed a few parts. Crowd participation and no ego rock star shit is one of the many great things about hardcore and punk.

Can you talk about “Never Knows Best” and the undeniable Only Living Witness vibe? Probably one of my fave three tunes on the record.

We’re definitely fans of OLW. That particular track was maybe a little more inspired by Life Of Agony’s second LP, Ugly. One thing that I love about Cold World is that we utilize everyone’s skill set. Haroun and Alex are great at writing bare bones hardcore as well as melodic, more textured stuff so if they come with a great riff (in this case, it was Haroun), we try to figure out a way to use it even if it may not fit the mold of what people think Cold World’s sound is. We approach vocals the same way. We thought this song would sound best with me singing so we did it like that even though I’m the drummer and we may never be able to play it live. Making the best song/record comes first and we figure the rest out after.

How did the guest spots come into play? G Rap! Meyhem Lauren! What?!! So dope!!!

We worked with Meyhem on the remix for the “How the Gods Chill” single and I became cool with him so it was important for me to have him on the record. G Rap is probably my favorite rapper so it’s incredible to have him on the record. We just reached out to his manager and he was into it. He called me while I was in the food court of the Cherry Hill Mall in NJ and asked me about the song and what the vibe was. Max B is huge for us as well. A lot of hardcore fans may not have heard of him so it’s cool to expose him to that crowd even if it’s just a skit. That guy is a legit genius to me.

“This place is so fucked!” That is such an awesome intro to “Cracks of Hate.” This record really is the rare LP with some vital live show type energy in the recordings and it stays hype even when swithcing into Meyhem’s part. Then that slow ass crossover riff comes back in! Damn! Did it just turn out special or was it fairly calculated?

Believe it or not it was actually sort of calculated. When we started figuring out how to approach this LP I told everyone in the band that in my mind it’s a concept record with the concept being that there is no concept. That’s how I always viewed Beastie Boys’ Check Your Head because there’s so many different sounds thrown together that it turns out making sense. I remember Haroun saying that he didn’t understand what I meant with the concept thing but when we started actually locking the songs down, he totally got it. Having our friends George from Blacklisted and Omar from Soul Search sing full songs also fed into the concept. It’s sort of like us making a hardcore mixtape.

What do you think is the most important thing a musician should focus on?

It’s hard to say because music is so subjective. I remember when I first started hanging out with my homie Arthur, who now fills in on guitar for Cold World a lot. He’s a metal guy and really into production. I would play him some records that I wanted him to hear and he couldn’t even listen to them because a snare would sound the wrong way or something and that seemed crazy to me but that’s really important to him. So, different people focus on different things. I will say, however, that it’s important to be a fan and know what’s been done before.You can be the illest shredder but if you can’t write an original riff, no one will care.

What are some tips for staying on point at a show business-wise but still having fun?

Be in a band with your best friends.

Get your hands on Cold World’s How The Gods Chill here:
http://store.deathwishinc.com/category/CW.html

PrevInterview: Dinosaur Pile Up Talks About Touring With Brand New & Perfecting Their Lineup
Interview: Joe Sib Talks About Staying Connected, Surviving In The Industry & Revisits A Track From His Band WaxNext