Interview with vocalist and guitarist Ryan Patterson | By Janelle Jones

I know you put something out with Deathwish before this reissue. You called them the “permanent label”?

I think that’s [our] way of saying that we are signing to Deathwish. I don’t know how permanent anything is in life and especially in music. But yeah, we just joined the Deathwish roster and plan on putting out our next record with them, and moving forward from there.

You just put out Sister Faith last year. Why reissue your self-titled 10 years after its release?

It came out in June 2004 and was around for a while, and then we pressed it for a tour pressing in late 2006. That was the last time our first record was in print. At some point, Level Plane Records, who put it out originally, stopped putting out new music. We wanted to get it back out there for a while, but there’s always new music to work on and sometimes you feel like you’d rather be doing something new. Especially working with small labels over the years, records just go in and out of print. Our next record after the first record, Goddamage, has been re-pressed on three or four different labels. Most of our albums have stayed in print. But it’s [been] 10 years and it seems like it was a good time to redo it. I had all these plans for quite a while: remixing it and remastering it, ‘cause [in] the original mix, the drums were barely in it and we recorded in a garage. It was very low-budget DIY recording. The drums were pretty drowned out, so my main goal was to get the drums back into the mix. Then I put out these other tracks from this era and there are cool photos that’ve never been seen from that time. I did some liner notes. We were thinking about trying to do some different things through different labels and it just seemed to make sense to do the reissue on Deathwish because of our history with them and their connection to us. Deathwish [has] moved on to all different things and had all different successes, they’ve always stayed very true to their heart of punk and hardcore. And that’s kinda the same thing for us. No matter what we do musically, I think we’ll always feel in our hearts that we’re a hardcore punk band, so it just felt like the right place to put the record.

How’d you hook up with Joel Grind from Toxic Holocaust to remix it? I guess you guys have played shows together…

Yeah we did a tour I think in 2009, (a) really long tour with Napalm Death, Toxic Holocaust, and Trap Them. I think it was five weeks across North America, and when you’re the opening bands on a tour, you kinda hang out more ‘cause the headliner has to get there earlier and sound check. I contacted Brad Boatright who was in From Ashes Rise, and he’s doing a lot of mastering now, so he’s an old friend and he’s one of the first people I gave the first Coliseum demo to. I contacted him about mixing the record and he said, “I don’t really do much mixing; I’m more of a mastering guy, but Joel from Toxic Holocaust is doing mixing,” so that worked out great because Joel’s a friend and knew the band. It turned out cool. There are inherent limitations with the recording because it was really raw. Joel’s like, “There’s barely any mics on these drums, there’s only so much you can do,” but it was cool. It was interesting. It was hard for me actually to hear new mixes of something [I]’ve been sitting with for so long. It’s part of my life and hearing [it] 10 years later, trying to get perspective, “Yeah, does this sound better?” I think it’s better, it’s different. Mainly I just wanted to hear the drums. [Laughs] I think they’re in there finally, and it turned out great.

Are the bonus demo tracks from your original demo? 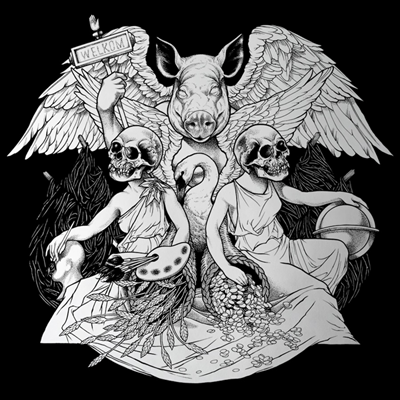 Yeah, those were recorded by me on one of those Tascam cassette 8-track recorders. I had one of those and I’d record my own demos and record other bands a little bit. I don’t think those were ever released. I think I sent those recordings to Level Plane and a couple other labels, but when we actually released a demo, it was just four songs from the album sessions before the album came out. These demo tracks on this reissue haven’t been heard by anybody. They’re even more raw and fun. Some of the songs, the lyrics aren’t even quite done. You kinda hear the songs are still coming together. Hearing that pressed on vinyl was really neat after it had been sitting around on cassette for so long.

And then you have two cover songs including Fear’s “I Don’t Care About You.” Do you like to have fun with cover songs?

Yeah. Those two covers were recorded at the same time as the album. The Ramones cover and Fear cover, they’re pretty goofy, just kinda fun things we did in addition to the album. We’ve done a few covers over the years and they’re almost… Except for the Danzig song, which is a little bit later, but it’s still late ‘80s, pretty much everything else we’ve done has been early punk stuff. We covered The Misfits and Pere Ubu.

We did a single last year that was really limited, we covered “Final Solution.” I like the simplicity of those kinds of songs. I feel like covers that get too involved lose steam. I like the simplicity of a Misfits song or a Danzig song or that Pere Ubu song. You can really deconstruct it. And those are the bands I grew up listening to, so those are the things that seem right to cover. There’re certain bands that I would not dare try to cover no matter how much I love them. A bunch of them we probably couldn’t pull off.

Plus, you’re encouraging younger fans to go check it out.

Of course. That’s always part of the appeal of a cover. I’ve definitely learned about tons of bands through bands covering them. It’s part of the lineage. A cover song or even mentioning you’re influenced by something, that’s how you follow that path of different bands and where their roots come from.

You said you have all these liner notes and photos for the reissue. What did you write? The making of the album?

Yeah, a huge part of the album experience to me is the artwork and the inserts and the tactile element of it, so every record we do, we try to do as much as we can. This thing is pretty elaborate. The jacket is silver-mirrored with black print on top of it, so everything is gonna have this very chrome, mirror-type printing on the LP itself, the jacket, and the two colored vinyl LPs inside. Each one has printed inserts and then there’s a huge newsprint poster that comes in it, and the artwork, so there’s all this stuff. Just the idea of this is fun, this is meaningful. There are photos a guy took of us at basement shows in Iowa in 2004 that I never used. And I just wrote a few paragraphs about the beginnings of the band, who I asked to join the band, the process of recording. I wasn’t really sure if I wanted to do that or not because writing your own liner notes is kinda like writing your own history. But I felt like it would be meaningful. I wanted it to have some perspective and historical context, the timeline of our band there for people to see, and hopefully they’ll appreciate it.

What do you chalk the longevity of your band up to?

Stubbornness. [Laughs] Being stubborn and refusing to stop. I formed the band when I was 25, 26, and I’d been in a lot of bands for a short amount of time. We’d put out a 7” and do a tour and then someone would quit and the band would break up and on and on. And that’s the nature of bands, especially when you’re young, people come and go. I didn’t want to look back at all the music I made in my life and just see this string of various projects. I wanted to see one defining thing: I did this. I could point to a section of records in my collection and say, “This is a body of work.” So I started the band and asked some friends to do it and as time went on, all those guys for one reason or another ended up not being in the band. So the line-up shifted. I felt since I was the singer and guitar player, I didn’t wanna stop. I didn’t want to have to break up the band. Thankfully, we’ve been able to keep going. We’re really fortunate that lots of labels have been interested in working with us over the years and lots of cool bands like to take us on tour. It’s kind of amazing, especially considering the fact that we’ve done whatever we want to do musically. We still play some of the songs from the first record, but our new music doesn’t sound like that anymore. I find it awesome that we’ve been able to do all we’ve done and always move forward, and do what we want and [have] people still follow us and support us.

Are you working on new stuff?

Yeah. Every Coliseum album we’ve had a different line-up, which is crazy. Carter [Wilson], our drummer now, probably seems like a new drummer to a lot of people, but he’s been in the band for five years. Our bass player Kayhan [Vaziri], everything’s going great with him. I felt like we should really write and record a new record quick, really capitalize on this. We’re getting along so well, playing so well together, and Sister Faith, as any new record should be, is by far the happiest I’ve been with of anything I’ve done. I want to jump on that, let’s not let three or four years go by, let’s start writing. We’ve got a third of the new record written, making plans to record later this year and maybe have it out next year. Sometimes it’s hard being a small-ish band. Then there are a lot of things that are really freeing because we don’t have to tour year-round. We can really do whatever we want. I always think, “I’m not gonna put out as much music,” or “I’m not gonna put anything out until we put out our next record,” but it’s exciting. They’re art projects. To me, it’s a project and you get to hold it in your hands and listen to it. The albums are the big statements, but we’re working on another strange, odd release for later this year. It’s hard for me to not do it. [Laughs] As long as someone’s there and wants it, then we’ll keep doing it.