We’re pleased to announce a chance for you to win a pair of tickets to an upcoming Mad Caddies show along with a signed poster from the band! Details on how to enter, and an interview with vocalist/guitarist Chuck Robertson, can be found below.

This contest had ended.

It’s party time! Mad Caddies is hitting the road AND there’s a new album on its way! First off, tell me about this coming tour. How long has it been since you’ve been to some of these places?

Hi there, yeah it’s been a while; this is our first North American tour in seven years. We have done a few short runs, but this is the first one that we’ll play almost everywhere in support of our new album.

Did you do like Iron Maiden and find out where people were illegally downloading your music the most and tour there?

[Laughs] No, but I think that is a great idea; good for those old dudes staying on top of it!

This tour is with illScarlett. How did the two groups get together for this tour?

We have actually never met illScarlet, but we have mutual friends in Canada that got us together for the tour. We generally find Canadians to be quite friendly, so we were glad to have them on the tour.

The sound of your new track “Back To Bed” has a really laid back feel, granted I’ve only heard an acoustic version. Is this the feel the entire album will have?

There is definitely a laid-back vibe towards the end of the album but I think we start off with some more rocking, and aggressive tunes.

It seems the Santa Barbara area has a really laid back feel they bring to any genre of music. Would you say the seclusion and ocean play a big part in this?

Well I can say, personally, I have never gone down to the beach and wrote a hard-core punk song [smiles]. So yeah I guess you could say our surroundings can influence the music, that’s fair.

What else can we expect from the upcoming release? Anything different from before – approach, sound, new additions, etc.?

We have spent the last 14 months writing, demoing and recording the new album ourselves. This is the first time we have taken on a project like this without outside help. It has been a long process but I think we are very happy with the end result. We finally have a new Mad Caddies album that is original different and exciting.

Mad Caddies are on the road now! 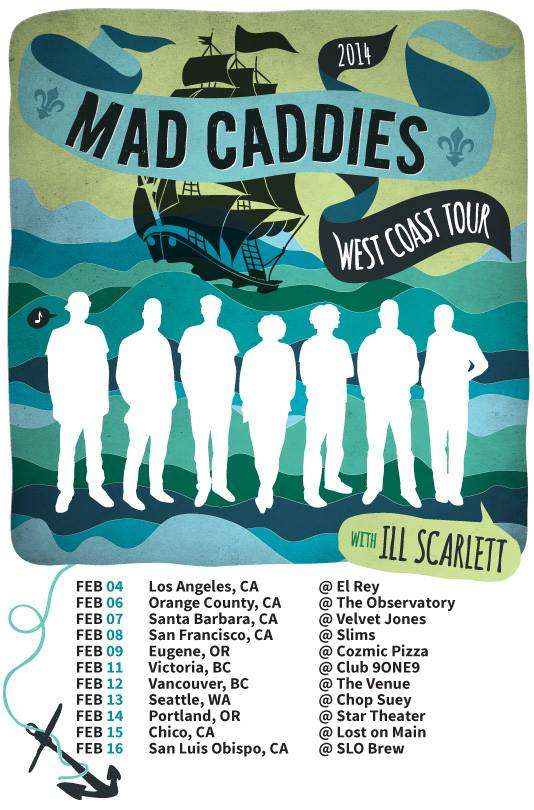 PrevInterview: Angelica talks about new album ‘Thrive’ and the concept of love
Band 2 Band:The Fake Boys and The Young Leaves Interview Each OtherNext