Interview: Crystal Viper Talk About Life In Poland & Having A Frontwoman

Interview with Marta Gabriel | by Eric May

Crystal Viper are a traditional metal act from Poland, with a powerful cornerstone in their frontwoman and lead guitarist, Marta Gabriel. Their new album Possession deals with a witch and her reincarnation; sounding like something right out of King Diamond! It’s got a frighteningly fierce cover with an intriguing story to boot. I spoke with Marta as she talked about the recording of this album, as well as the one in a lifetime experience of fan contribution on the disc. She also spoke to me about her company, Thunderball Clothing; and how she’s made clothes for bands like Sabaton and Vader!

For those who aren’t aware, tell us a little bit about Crystal Viper and how long you’ve been out there kicking ass, as one of the hardest working traditional metal bands.

We have been around since 2003. We recorded our debut album in 2006 and released it in 2007. Since then, we have done five studio albums, one live album as well as a bunch of singles and compilations. We also recorded cover songs for something like nine tribute albums. Additionally, we have toured in more than ten countries. And most of all, we play heavy metal!

I don’t like the word poser. I have nothing against fans of other genres, and nothing against the modern scene. Everyone should listen to the kind of music that they like and that they enjoy, and everyone should play the kind of music that they like and enjoy. We love metal, and so we play metal. We take our inspirations from classic metal acts from the seventies and eighties, so I believe that this is why we are considered a traditional metal act. We also prefer classic songwriting, classic riffs and melodies that stay in your head, so yeah; we are traditionalists.

Let’s talk about the album Possession. From the cover and concept, it almost makes me think of King Diamond. What exactly is the story behind Possession, and how did some of your fans get to contribute to the album?

If I told you what Possession was about, then it would be like telling people how the movie that they were going to watch will end. But I can say that if you analyze the front cover artwork of our new album, and listen to the album and read the lyrics; you will find out that almost every single song is represented by the picture. Yes, we are diehard King Diamond fans; but I wouldn’t say that we tried to do something similar to King Diamond. You know, it’s impossible to copy perfection. We invited the fans to be special guests on our album. In the end, something like fifty fans of the band sent in recording of their screams, and we used them in the final mix of the album.

Aside from the fans, what other special guests have you invited to be on this album?

For this new album we invited Harry Conklin of Jag Panzer and Satan’s Host, and Sataniac from Desaster. We also sometimes have male choirs in our songs.

Let’s talk about the recording process. What was it like writing and recording Possession? How long did it take and did everything go smoothly? What was the atmosphere like in the studio?

Yes, everything went smoothly as we always spend a lot of time on pre-production. So when we enter the studio everyone from the band knows what should be done. We don’t like wasting time in the studio and thinking that maybe we should try this or this. We are focused in the studio, and we know what we want to do and what we want to achieve. The tracks were recorded in something like two weeks, maybe less; but I would say that we were doing Possession for a couple of months, if we count both the pre-production and mixing processes.

Here lately, I’ve noticed that many female fronted metal bands are taking the stage and are proving that they’re just as good as their male fronted counterparts. What do you feel about this new trend in the metal scene, and do you think it’s going to be here to stay?

Well, I listen and I like a lot of female fronted and even all female metal and rock acts from the seventies and the eighties, like The Runaways, Rock Goddess, Girlschool, Warlock, Chastain, Acid, and many others, so I wouldn’t really say that it’s something new. I honestly don’t think that girls need to prove anything to anyone; at least I don’t care about proving anything to anyone. If someone doesn’t like or doesn’t accept female fronted acts, then it’s not really my problem. Everyone has their own personal taste.

I just have to say, there are some incredible solo portions on this disc; some of them are absolutely mind-blowing at times. How in the heck do you guys do it?

Thank you! Well, it looks like we have a really talented guitarist in Crystal Viper and that’s no big secret.

Does the story behind Possession have any personal meaning to you? What inspired this concept?

Yes it does. You know the music I do, and the stories I write for our albums come out naturally. If I get inspired by some movies, or by some books, or music, or artists or something, I start to wonder if it’s good idea for the album, and if it is – I start working on it. In case of Possession it was the same. After seeing a bunch of movies, reading a few books and hearing a few stories, I came up with a concept that you can find on the album. What is quite cool in this case, as the concept is connected with our previous album. Maybe it’s not a necessary continuation of these subjects, but it has a few smooth references here and there. 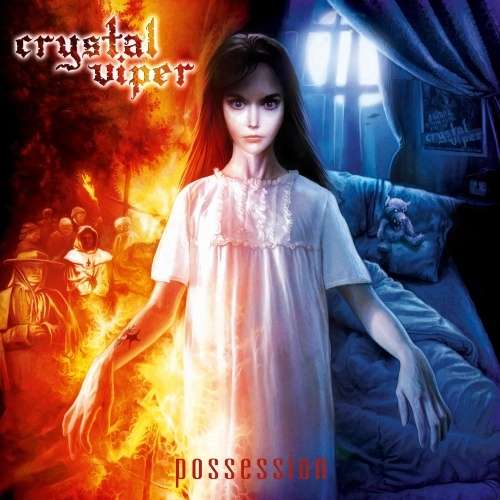 I’d also like to talk about the cover art. What is the significance between the cold blue section of the artwork, and the fiery orange section? It’s almost like a sort of bipolar reference. Is the girl actually possessed, or did she just have a bipolar condition, which they would have thought was possession back in the dark ages?

We wanted something very classic this time, very old school with more aggressive colors. Also if you carefully analyze the front cover artwork and listen to the disc and read the lyrics, as I’ve said before; then you will find out that almost every single song is represented on this picture. We love this artwork as it screams it is a metal album! An explanation of the colors used is very simple: On the left side you see the witch Sarah, as she is burning at the stake. On the right side, you see Julia; her reincarnation. The story happens in just one night on Friday the 13th, and tells the story of Julia. But I won’t tell you more, as I don’t want to take away the fun from people who are going to check the album and the story that we told.

What do you do when you’re not playing music? What sort of hobbies do you have and what it is like over there in Poland?

I have my own company named Thunderball Clothing. I make custom and stage clothes, and it takes most of my time. I’m addicted of creativity, and making stage clothes or custom clothes for people who want something unique, is something I really like and enjoy! So far I have made clothes for the guys in bands like Sabaton, Vader, Wizard and several others. I also love watching movies, reading books – you know; the usual stuff. What is it like here in Poland? Well, we have really high taxes. (Laughs)

What are some other bands from Poland that you enjoy and would like to get the word out about?

I really like Vader. I think they are my favorite Polish band. We even recorded a Vader cover song as a bonus track for our previous album Crimen Excepta, and Peter from Vader joined us in the studio to record guest vocal lines. Other Polish bands I really like are Behemoth and Azarath.

Let’s talk about touring. What’s one of your most memorable touring sessions, and what is one of your least memorable experiences while touring? Who have you met on the road? Did you have a chance to play a show with any of your musical inspirations?

Oh wow, it’s hard to list the most memorable one. I love touring, the stage is my home. I was born to play live. It is something that gives me energy; it’s like the air I breathe! Every single show was special. I love visiting new places, and coming to places where we never played before. Yes, we’ve had the honor to share the stage with some of our favorite acts, such as Slayer, Immortal or Manilla Road to name a few. It’s always something special and unique; as all members of Crystal Viper are diehard metal fans. We all collect records; we travel to see other bands, and so on.

What I think is wrong, is that people are too greedy. People kill and hurt each other just to earn a few bucks, and it’s really sad. People also have a problem with tolerance: Everyone wants to be tolerated and doesn’t like when other people tell them what they should do, but at the same time people force each other to their religious or political beliefs. If everyone would focus on themselves, and would think of what he or she could do to make the world a better place; then it would be a good start to fixing everything.

Thanks for answering my questions and for a strong release in Possession. You’ve done a great job and I’m sure it will be well received.

Thank you; it was a pleasure to answer your questions! Thank you for your support, take care and remember: We are Metal Nation!

PrevInterview: The Men Get Introspective & Discuss The State of Rock’nRoll
Experiencing Nirvana: An interview with Sub Pop founder/author Bruce PavittNext