Daniel Austin is a musician (Tooth And Claw, Die Young, Will To Live, Mainlander, Band Of Mercy) turned animal rights activist turned competitive powerlifter and author. A real do-it-yourself, creative type, drawn to both the verbal and written forms of self-expression, lifting heavy iron, fighting for the animals, and promoting the benefits of veganism through his own personal strength diet.

Hardcore music may have been the gateway that allowed Austin to discover more about his purpose in life, but as one thing led to another, he’s been able to strengthen his message and transform his mission into something far more impactful than ever before.

“At this point in my life, after working years of activist non profit jobs, doing a considerable amount of volunteering for various causes, as well as being a vegan athlete, I have learned that simply giving the world your light via your talent, your creative energy, or what have you, is sometimes an amazing way to share your message and bring new minds into the fold,” says Austin.

Beyond his mother laying the foundation in regards to his initial motivation to veer more towards vegetarianism, inspiration from the vegan/straight edge hardcore community that Austin strongly identified with in his youth, led to him wanting to become more active within that world. In turn, Austin became vegan at the age of 22, back in 2005.

“My whole intersection of animal rights came from music, and because I got into animal rights, that’s actually where I met athletes. I wasn’t interested in athletics until I met vegans who were athletic, and so I say everything comes back to music for me,” explains Austin.

He continues, “Most people get into vegetarianism because of their feelings. It’s an ethical thing we’re feeling. About treatment of animals and how we relate to animals. A lot of the time it has nothing to do with thinking how things will benefit ‘me.’ And that’s how I was going vegan, I didn’t know what I was doing. I just did it out of a sense of listening to my inner-moral code.”

After dedicating a chunk of his life to touring as vocalist with his primary band at the time, Die Young, Austin began participating in the fight for animal rights full-time under a non profit in 2009.

“One thing that really encouraged me to keep getting better at fitness and strength was when I started working out as an activist, I met other athletic vegans. Just the vibe of talking to people about animal issues, people were more curious because they thought it was weird that I didn’t look like I was about to die and I didn’t fit the stereotype,” says Austin. “So I thought, ‘oh, this is good for my message’-to get more fit. It encouraged me to keep lifting more.”

“For so many people that come to (veganism) out of a concern for animals, they don’t even think about carbs, fat and protein, and how that’s going to affect body composition. Once I was more in the fitness realm and I was training people, and I wanted to get bigger and stronger myself. Fine-tuning all of those balances became kind of an obsession.”

Since then, Austin has been honing in on his crafts, utilizing his developed skill sets in writing, powerlifting, and vegan dieting, to promote his message more efficiently and sustainably for not only himself, but for people interested in bettering themselves, and of course, the animals.

With his latest book release, The Way Of The Vegan Meathead: Eating For Strength (Second Edition), Austin not only revamped the appearance of his first ever book, which came out back in January of 2018, but took the opportunity to inject more information to further reinforce the contents within. 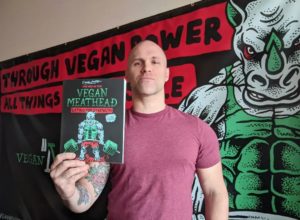 After releasing the first edition of his book, Austin continued to grow his knowledge of nutrition and compete more at powerlifting meets-kicking major ass in the process. All the while, the market for vegan food and supplement options expanded greatly. Austin realized that after some years had passed, people had more questions and he felt there was plenty of new information he could add to his book. The second edition comes equipped with stronger grammar, more product information and protein breakdown of those products, graphs, and charts.

“I’ve been lifting for more than a decade, and I’ve been competing for seven years straight. I’ve been eating this strength diet for eight years and it’s transformed my life and I’m happy to share that and help people on their path,” says Austin.

He goes on, “It’s a lot of trial and error… the thing with transforming our bodies and our performance is that it actually takes a lot of repetition, very specific movements and conditioning to, after months, start to see that we’re getting towards our goals.”

Over time, Austin realized that by redirecting his energy from face-to-face activism into investing in himself, he learned that he could feed two birds with one scone: maintain his health and create powerlifting goals, while promoting vegan beasthood. His idea to write a book about it was the perfect way to compile all of these things into a one-stop-shop.

By forging his own personal path of knowledge and strength, Austin discovered that this intersection of his talents and creative energy became his most powerful form of advocacy. “For me, taking a step back from the activist world, I started—especially into my 30s—investing more, making sure I was solid within myself and with my health. Strangely when I did that, that’s when this vegan meathead thing popped up, it was more people coming to me because they saw I was thriving. They wanted to know more.”

“What I want people to know in the vegan realm, is that you can do anything you want and you can still be really good at it or the best at it. It’s not a detriment, it’s not a handicap. You just have to learn how to put all the variables together in order to achieve your goals,” states Austin.

To me, The Way Of The Vegan Meathead: Eating For Strength (Second Edition) offers more than just nutritional advice for those seeking to get stronger, although that’s where the book finds its center. Austin weaves in a very upfront and honest account of his upbringing and personal journey that led up to his transformation.

Through his blunt and direct tone of voice, he addresses counterpoints made against vegan ways of dieting, breaks them down and offers solutions backed by professional sources. After years of trial and error and research, he’s able to discuss the relationships between macronutrients and precisely how one affects the other. This offers the reader a solid understanding of how to achieve balance within their diet-regardless of their goals. The Way Of The Vegan Meathead has just as much brains as it does brawn and there’s plenty more to gain from this book than just…gains, although the gains will be most excellent.

To order a copy of The Way Of The Vegan Meathead: Eating For Strength (Second Edition), click here.
For more on Austin’s music projects and other books, view his webpage here.