Interview with Arno Strobl  |  By Eric May

Those of you who are familiar with Carnival In Coal or 6:33 might be surprised by Arno Strobl’s latest and most bleak effort, We All Die (Laughing). Devoid of all humor, it explores the depravity of the mind through some of metal’s most unforgiving elements. I spoke with Arno a bit more about this, as he discussed the recording process (which included a hard drive crash), the bleak album cover, his thoughts on modern music and cooking!

We All Die (Laughing) is much different from your projects in bands like 6:33 and Carnival In Coal, in the fact that it doesn’t seem to have any light-hearted moments. One could say that it’s one of the bleakest and heaviest albums that you’ve ever done.

That’s also my opinion, even if sometimes we’ve been reading in reviews that “it’s no surprise that we may find here some humor in WAD(L) due to the presence of Arno Strobl in the band.” I have to admit I can’t see any humur in Thoughtscanning. And if there is any, it was not intended at all. This album has been written with heavy hearts and heavy souls.

How did this project come about, and was it meant to be just one track in the very beginning or were more planned?

This project is the pure child of the social networks. I came across Déhà on Facebook and we started talking about Maladie, the German band he’s playing in, which I like very much. Then, we talked about our other tastes in music and stuff, before he sent me this long instrumental song that was going to become “Thoughtscan.” I was totally amazed by the emotion carried by the song, and therefore I proposed him to try and do something together with it. WAD(L) was born. I went to his place to record some vocal ideas once or twice before we ended up recording the whole shit from end to end (twice, because his HD crashed at the end of the first session). We shortened the initial track from approx. 5 minutes. The result was sounding very dark and heavy (in terms of feelings), so we decided one 33 minutes would be enough for a first effort. 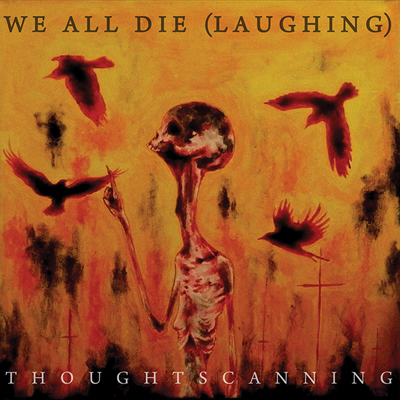 What was the recording process like for Thoughtscanning and what was the atmosphere like in the studio? Did you run into any problems?

Apart from that HD crash, everything went as smooth as possible. We laughed a lot during the recording, to lighten up the tension due to the track itself and its lyrical content. We had a great time working together, really.

Furthermore, what in the heck do you guys mean by Thoughtscanning? Where did this album title come from? Does it have to do with some sort of 1984 type of conspiracy like the thought police, or is it something much deeper?

It’s the title of a song from one of my previous bands, Extravaganza. It’s about analyzing all the data contained in one single brain, be it sadness, anger, fear, hope, guilt… And it’s pretty much what we tried to achieve with the lyrics of the album, that are “scanning” (if I may say so) the thoughts of one depressed person. Just as the music itself, it displays different states of mind, because no one can be 100% sad or 100% angry. What you feel is always the result of mixed emotions. That’s what we’ve been trying to recreate musically and lyrically.

Several different styles of music are experimented with on the album, like death metal, black metal, funeral doom, jazz, synths and even more hardcore/sludge territory in addition to the vast amount of prog that features on the piece. What artists would you say inspired the work, and how long did it take to combine all of these different approaches together in such a fluid manner as is shown with this release?

That’s a tough question to answer too, because both of us had different references. But all the styles you just quoted are things that we both listen to, so I would say that our common playground was a mix of (Swedish) Shining, Opeth, Katatonia, Frank Sinatra, true black metal shit, but also much smoother things. Regarding the way we tried to mix all this while staying “fluid,” I’d say that must be the magic of working with someone you were meant to work with. We never really “tried” things that didn’t fit in the final picture. At the end of the day,Thoughtscanning sounds 99% like the rough basis that it was after the first demo we’d done together. Only the incredible production of El Mobo covered it with flakes of gold [smiles].

The name of the project, We All Die (Laughing) is as I’ve said, a sharp turn from material that we’ve been known to expect from you. Who came up with the band’s name and what do you think it means in context of the music?

Déhà came up with that name, which is the title of a song from a band called The Angelic Process. Both of us liked the way it sounded and the idea of “mixed feelings” we wanted to express with our project.

Who designed the horrific cover artwork for the disc? That is really disturbing, but it definitely fits the context of this very dark style of music. What is the idea behind the artwork?

It’s a painting by Maxime Taccardi (www.facebook.com/MaximeTaccardiArtworks). He’s a French painter whom we were already friends with before the recording. First time I saw his paintings, I immediately got struck by that image, and told him : “One day, this will be the cover artwork for one of my albums,” which he accepted. When we recorded Thoughtscanning, it was clear this painting was the missing piece of the puzzle. I love this monstrous fleshless creature that shows the sky and the ravens in a very childish naive way. For me it’s a perfect expression of what we are as human beings when we have to face our despair – “naked, blank, meaningless,” just as it goes in the lyrics.

Are there any plans to play this material or perhaps other songs that you’ve recorded with this project live? If not, why?

Playing live will be very difficult for the moment as Déhà moved to Bulgaria, so it may be very tough to rehearse and stuff. To be honest, we already planned to work on further audio material. The success of Thoughtscanningand of our further material will probably tell us if it’s a good idea to play all this on stage.

What is your opinion on the state of our world? From the sounds of this album, (although it is littered with several fascinatingly beautiful solo pieces) and the look of the cover art, it would seem that you feel we’re heading down a very grim path.

The album doesn’t express the state of the world itself. It’s much more displaying the despair and the suffering of that small creature called “a human being.” But of course, by extension, you may guess rather easily how full of hope we are (hum…) regarding humanity, the world, and life in general.

What other projects can we expect from you in the future? Might there be more to come from this disturbingly bleak new act, or is new work coming from 6:33, possibly even a reformed Carnival In Coal, or something else that’s still behind the curtain?

Déhà still has 30 or so solo projects that are going to keep him busy in 2014. In parallel, we’ll go on writing stuff for WAD(L). I should also work with a famous French guitar player named Christophe Godin and maybe write a couple of songs with my homie Fred Leclercq (who plays bass in Dragonforce). 2014 being the 15th anniversary of the first Carnival in Coal album, I also plan to play the whole LP on a couple of shows, mainly in France.

What do you think of modern music today? Not just popular music, but the heavy metal scene as well?

Too many useless bands, as well as too many excellent bands. Hence, the good bands get drowned in a sea of shit, and it’s a real pity. Otherwise, metal does not seem to have to worry for its health. Some new bands are doing great (among them, my fave one is Ghost BC, which is pure fucking genius), and older bands like Voïvod or Death Angel have released last year their better albums in ages. Everything comes around in cycles, and metal keeps on rolling. Today’s popular music I couldn’t speak about. Apart from some bands like Daft Punk or Jamiroquai, I stayed away from everything recent. I keep on listening to my old albums by Stevie Wonder, Billy Joel, some funk, jazz, or hip hop bands from the early days of rap.

What hobbies do you enjoy, other than playing music? Are there any books or movies you might recommend? Perhaps food?

I can’t speak for Déhà, but I’m a lot into French movies. So I definitely watch a lot of these. And my other passion besides music is cooking. It’s probably the only activity on earth that gets me relaxed. I love Italian food, French food, Asian food, and foremost I love to try new stuff just by following my intuition. A bit like music wise [smiles].

Thanks for making such an interestingly dark piece of music. There’s really nothing out there like it!

Thank you so much for this interview that has been the most witty and interesting one in months!