“Do you remember when basements felt like stadiums?” indie punk artist Evan Greer asks in the opening line of her album Spotify is Surveillance, the track “Back Row” acting almost as an allusion to a simpler time, pre-pandemic, maybe even before that.

“I regret every single show that I spent in the back row talking shit on my phone. Every party that I skipped, every friend I lost touch with, but when the crowd would sing along, it felt like we belong.”

Greer explores taking up space and being part of a community as a trans person on the track, and the lyrics resonate in a time when people have been more isolated from one another than ever before. By the second track, “The Tyranny of Either/Or,” Greer jumps right into discussions of anti-trans legislation, individual liberty, and the constraints of late-stage capitalism. By track three, “Surveillance Capitalism,” she dives right into the detriment of contemporary structures on both on individuals and the music industry she is part of.

“For me, my music and activism have always been inextricably linked,” Greer says. “That doesn’t mean that every song I write has to be some raging protest anthem, but it means that I often find music as an important creative outlet to explore and talk about the political issues that are important to me.”

The title of the album on its own acts as a statement against the increasing presence of consumerism in the U.S. and evolving, often invasive technologies, in our day-to-day life. The release follows Spotify’s announcement of their new patent, which would use an AI voice recognition tool to listen to people’s conversations, infer accents and perceived gender, and use the information to recommend music and ads. Greer already had the title ready before the news came out, which became all the more reason to hone in on these themes. 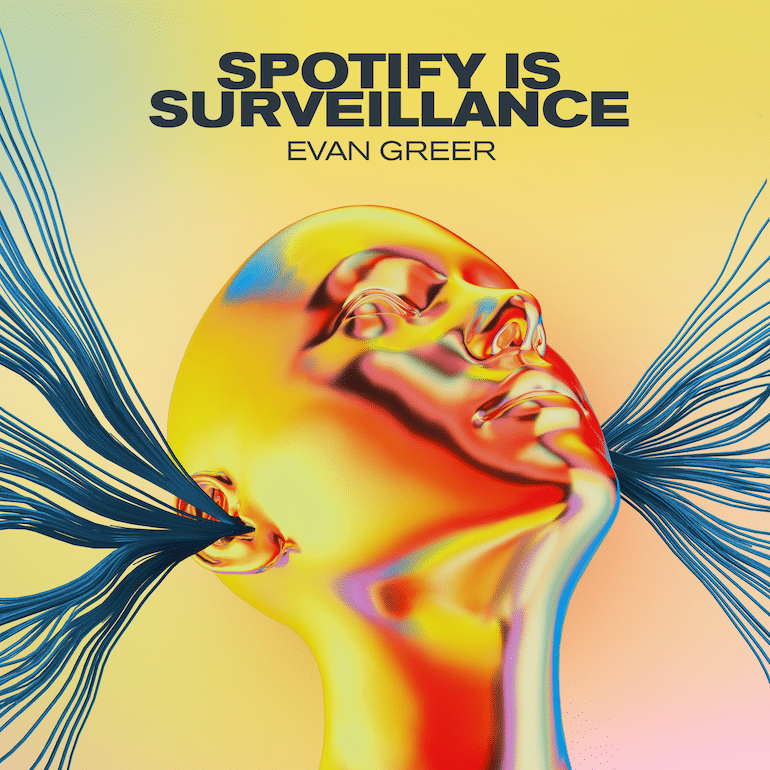 “Originally, I was just pointing out the fact that Spotify has the same behavioral-advertising based business model of surveillance capitalist giants like Facebook and YouTube. But then, it felt like Spotify was basically just actively trying to prove my point. Since then, we launched a campaign at StopSpotifySurveillance.org and a letter signed by more than 180 musicians, including Tom Morello, Laura Jane Grace, of Montreal, Kimya Dawson, Ted Leo, and lots more, calling on the company to commit to never implementing or monetizing the patent.”

Greer helps run the digital nonprofit Fight For the Future and is working with the Union of Musicians and Allied Workers to support the #JusticeAtSpotify campaign. While capitalism often tries to pit artists against each other, Greer says that it is powerful to see artists upending that and demanding more transparency, better pay, and basic justice and dignity for everyone in the music industry.

With Spotify continuing to grow, with little criticism or pushback, Greer says it’s incredibly important, for indie artists especially, to take matters into their own hands against the streaming giant, especially because traditional institutions who claim to advocate for the interests of artists will not. She also said she prefers to approach these issues through her lens of music and punk rock, over an op-ed or blog post.

“It was so important to me to have a space to just express myself and create art that reflects what I’m seeing and doing in the world,” Greer says. “I think it’s so important for both artists and activists to try to connect with people on an emotional level, rather than just an ideological level, and my hope is that the album really reflects that humanity.”

The album was “very much a product of quarantine,” according to Greer, who says it was empowering to have the space to play in her bedroom with the sounds and ideas that made their way onto the album. As someone who embraces these tools and others in the modern age, it was important to her that the album not become “some punk version of the Netflix documentary The Social Dilemma,” but rather that we need to be more critical in our thinking about the technology we use day-to-day, and that is abundant in the current dynamics of our society.

Looking to the future of the music industry, Greer says: “I shudder to think of a future where music is made to please some cold-blooded, profit-maximizing algorithm, rather than created for human connection the way it has been for literally thousands of years, but I also don’t think it has to be that way.”

Greer says we must start building alternatives, embracing a reality where artists own the means of not just production, but distribution of their music, which will require new technology and policy changes.

“Our copyright system, as it’s currently organized, is incredibly beneficial for near-monopolies, like Spotify, but failing to ensure fair compensation for independent artists,” Greer says. “The internet has the potential to grant every kid on Earth universal access to human knowledge and creativity, and ensure that people are fairly compensated for the things that they create. But we only get that future if we fight for it.”

Spotify is Surveillance is available now to purchase and stream. To learn more about Greer’s advocacy work and get involved, visit unionofmusicians.org, stopspotifysurveillance.org, or fightforthefuture.org.

Influences for Spotify is Surveillance:

Check out Evan’s video for “Surveillance Capitalism” below: