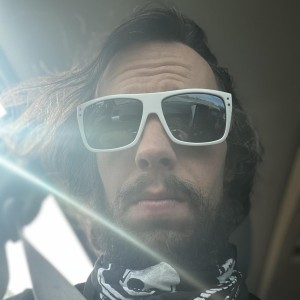 California post-punk band Fearing has followed up their 2020 release, Shadow, in stellar fashion with a new EP, entitled Desolate. From the first note of the record the motives are clear and the execution is spot on. This work utilizes a different approach than their previous records, albeit maybe not entirely by choice.

“We all went through a lot of changes over the past few years,” says guitarist Joey Camello. “Brian moved to L.A. I went from having a regular job to working for myself for a while and then I eventually moved to L.A. too. A lot has been going on and we’ve managed to remain busy. Then record pressing is insanely backed up, and we considered going the lathe-cut route, but at the end of the day we decided, ‘Hey, there’s nothing else going on, we’re still a band. Let’s be a band and release some more music.’ So this one ended up as a digital release due to not wanting to wait around anymore.”

Desolate absolutely oozes new wave vibes. Bowie, The Cure, Depeche Mode, and New Order all come to mind when hearing the reverb-soaked guitars and thumping pulsating bass, heavily side-chained to the unrelenting quarter note kick. It’s not industrial, and not goth, but it’s dark, it’s swirling, and it sounds dangerous. You’ll be transported into some scene of a black, leather-clad villain, sitting in the smoke-laden air of that back room where all the shady deals that go down. This is bona fide post punk: the real deal, the essence of everything that sprang up from a beer-soaked New York dive stage and sought to take Ronald Reagan out back and beat him senseless with a Lexicon reverb unit.

Fearing’s prior releases had all been done in collaboration with a producer or engineer. But after the last few projects being fraught with scheduling issues, and a general feeling of being rushed, the band decided to take their sound into their own hands and completely recorded this latest release at singer and bassist James Roger’s home in Napa, California. A most interesting and effective choice was made in pushing the vocals outside, with one voice in each speaker. Traditionally this is not something often done with the lead vocals, but in the track “Desolate” it works exceedingly well. The drums are allowed to freely dominate the center without obscuring the haunting duet of James and Brian.

Fearing will be out on their longest tour yet, with Gatecreeper and 200 Stab Wounds this spring. The band has plans to continue writing music on the road and at home, in anticipation of a larger recording project next year, and aims to bank up as much material as possible. “We’ve learned to write more than is needed and pick and choose the songs. This EP started as like 20 demos, which became 10 songs, of which four made the EP,” guitarist Brian Vega explains.

From releases like Turnstile’s Glow On, to the resurgence of post-punk, renewed interest in archaic 8-bit game systems, and America once again being imposed upon by an emergent period of culture too utterly strange to describe, the world of music has returned to some pretty fun engineering techniques. Oceans of reverb, snare tails a mile long, vocoders, layering, and all that analog synthy goodness seem to be retaking their hold in the mixing desks of the 2020’s and Fearing has delivered on this in a true-to-form fashion.

Listen to “However Long” here: