Interview: FM359 Talks About What Success Means To Them

I recently sat down to talk with Mike McColgan, Street Dogs lead singer and frontman for his new side project, FM359. Describing the new project as ‘non- religious Gospel’ it’s a change up from any of the members’ previous work. Sometimes people will look at an artist, actor or TV personality and buy or support anything with their name attached to it. While this isn’t always a bad thing, I think in some circumstances the reason why said people endorse or start a project can fall on deaf ears. McColgan has always come across as a salt of the earth-type character and his lyrics, on- stage dialog, and off stage friendliness are a refreshing reminder that some artists genuinely live and feel the life they sing about. Says McColgan, “I think we’re worth checking out. I think people should give us an honest objective ear. I think we’re an honest hardworking band that’s approachable and accessible. We don’t come in with any airs or any pretention. We don’t think that we’re any better or any worse than anyone else. Before or after a show you’d be able to find us and have a conversation with us. You won’t find us tucked in the back of some bus or up in some plush, swank hotel. We are a working class band and it’s not a cliché, it’s real. I work for the Building Wreckers Union in Boston, Local 1421. I swing a sledgehammer and break apart walls. We’re about as true as it gets as far as the description of being a working class band…all of us have jobs. We haven’t forgotten where we come from nor have we forgotten just how much it means for someone to take time and money out of their lives to come see a performance. We go all out no matter what the circumstances are and it’s worked out well for us.”

In “Sons Of Liberty” you guys capture the folk, gospel, Americana feel for me perfectly. This strikes me as a classic sing along style song. Can you tell me more about it?

Hugh Morrison who plays accordion sporadically with Street Dogs on the road and will track stuff with us in the studio is a full time band member in FM359. He wrote “Sons Of Liberty” and I think the song gets inside the condition of someone in Boston or in Massachusetts for that matter right on the cusp of the American Revolution. I think the beauty of the song is that it doesn’t really sound that historical. I think it just has a real sing along, every man, every woman feel to it. That song is actually one of my favorite songs on the FM359 record. The thing about the band that differs dramatically from Street Dogs is that it’s less studied and more carefree. A bunch of guys are sitting down writing songs and immediately tracking them whereas with Street Dogs there is demoing, promo demoing, pre production and then tracking. It was just a different experience and a change of pace. We’re really proud of the record. It was a great experience making it and down the line, going forward, I think we’re going to look forward to playing shows with it.

I’ve yet to visit Boston. Maybe it’s a combination of the movies and how its portrayed in the media and sports as of late, but the impression I have is that it’s nothing short of a town full of hard working, motivated people that are proud of who they are and where they’re from.

That’s actually a good description of Bostonians. They work hard, they play hard and they’re all sports mad (laughs). The sports and the passion for the sports, runs hand in hand with the love for the city…it’s all one in the same. A lot of people that come from outside the city and into it to visit, I think find it way more hospitable or down to Earth than the impression that they might get through the media.

Do you think this style or, better yet, blend of musical styles could come out of anywhere other than Boston?

I don’t know, I mean it’s conceivable that in other pockets of the U.S. that a group of musicians could get together and do something comparable. I think that we just caught a special moment in time where we had a lot of songs that we’d been holding onto for a long, long time and we just knew they weren’t Street Dogs songs. We decided that we’d do a side project and tracked an album. Every day before we went in and wrote the songs we would drive down a farmer’s market road in Houston, Texas where I think we’d seen a road sign for FM359 and we decided that it’d be appropriate to call it that. Every morning before we’d start writing songs we’d travel down that road like I said and talk about the project, the road and all things relative to our music. Everybody was going through a lot personally on so many levels then. Truth, love and liberty are what I think everyone in the project is seeking and I think most people in general are too. We mined deep inside ourselves for this project and I think if you take a close listen to the record and look at the lyrics you’ll feel that.

Talk about the album artwork. Vintage military photographs are very powerful. Both of my grandfathers served and I know you did as well. I can never help but wonder what’s going through a service man’s head in photos like these. Why these two? What was it about these photos that made you and the band select them?

I think that service is a difficult thing, an honorable thing, a noble thing, a complex thing and the intensity of it shows on a young man’s face. I think that those two pictures really captured that without saying what I just said. We as a group thought that they were great images and we felt that they worked with the body of work that we have musically.

In “Some Folks” there are some great lyrics. I enjoyed your comments on culture and religion in this one. Some of the lyrics that I enjoyed were (paraphrasing), no man is a better man than you, it doesn’t matter if his collar is white or blue and that he’s been down just like you. What made you want to talk about that? 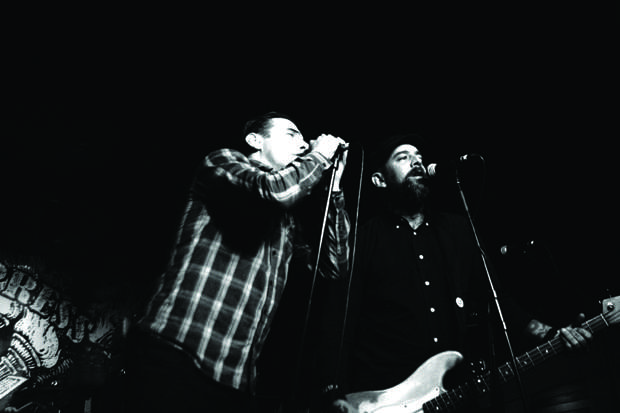 Well, in the entertainment industry or in the media there is a lot of advertent or inadvertent glorification of socialite behavior. It seems as if there is a lot of entitlement in the entertainment industry as well. It feels as if entertainers of the film, TV or music variety will pump their brakes or pump their chests as if to say, “Do you know who I am?” At the end of the day, we see it as people are people and no one is any better or any worse than anyone else. Our feet stay on the ground and everyone goes through stuff and I don’t think that anyone should be put on a pedestal. I’ve never been comfortable with that. We take a little poke at religion too because we never felt comfortable with fundamentalist religion or strictly defined dogma or things of that nature. We’re a tempted people and we face new choices day by day.

Well I’m a recovering Catholic so I know what you mean.

The litmus test for success isn’t a million dollars, a big limousine and a big house on the hill you know what I mean? Success is internal just as happiness and peace is internal. Whether that means baking doughnuts in the morning, being a librarian, being a nurse or being a cop or a firefighter or a construction worker being in IT sitting in an office or whatever, I can go on an on. You don’t have to be a celebrity to be successful. Everybody is somebody and I think I heard that in a song by a good Irish band a long time ago. (Laughs)

That’s an awesome message man and I think more people could stand to hear that.

It should be blasted all throughout Los Angeles at high volume continuously for like 7 days on infinite loop. (Laughs)

In the song “Restless Man” there is a lyric that goes, “I found comfort in my living hell.” It feels like a song that could be stripped down to just guitar and done in a very grassroots country style. I feel this way about nearly every recording. I can see how this could work in many different styles. Tell me about the song. What, if any was your stylistic inspiration behind this?

Rick was the quarterback on that one lyrically. I might add my two cents in here and there but we never really sang about girls and we never really went down that street. We decided to with that song and it was a good leap of faith for us. We were really apprehensive about that song, more so than the other ones and quite frankly, that almost didn’t make it. Upon listening back to the lyrical content and how it felt and how it was sung and hearing what it projected we felt good about it.

It wasn’t studied or very well thought out, it was very honest, direct and immediate. Street Dogs isn’t like that. Street Dogs is a lot more studied and methodical. It was really liberating and I got to go to a lot of places as a singer that I never traveled into before.

What are your hopes, expectations or wishes for 2014?

I just hope people in general can think about their brother and sister, man and woman a little bit more and help others throughout our country and throughout the world that’s all. That is one of my hopes every New Years Eve going forward into the New Year. It is all about helping the guy or girl who’s down on their luck and been knocked to the ground. It’s about lifting them up and I think in song we’ve traversed down that road too. That’s my hope.