Interview: Fu Manchu Plays One Bone-Crushing Riff After Another

Interview with vocalist and guitarist Scott Hill  |  By Brandon Ringo

For almost 25 years, Fu Manchu have presided on their throne as the fuzziest, rawest, and downright greatest stoner rock band in the world. This year, the band is back Gigantoid, one of their most ferocious albums. Weighed down by one bone-crushing riff after another, Gigantoid shows the band is still a force to be reckoned with. In this chat with vocalist and guitarist Scott Hill, we discuss the new record, as well as the label they run and the stream of reissues coming out on it.

Your last record, Signs of Infinite Power, dropped about five ago. What have you been up to since?

We were going to start writing a new [record] once the Signs Of Infinite Power touring was done, but we realized we were coming up on the In Search Of… 15 year anniversary, so we asked about reissuing it on vinyl. We got the OK from the label, and then our manager said, “Let’s play a couple of shows where we do the entire record live start to finish.” We’ve never done something like that before, so we said OK. All of a sudden, a full U.S. tour was booked and a full Euro tour was booked. We didn’t even try playing the entire record live yet, so we had to get to work relearning the songs. One of the songs, “The Bargain,” we had never played that live. We toured on that for the year, and then the next year was the 15th anniversary of The Action is Go, so we thought, “Let’s do the same thing for that record.” We did another year of touring on that. Then we said, “We need to write a new one before it’s the 15th year anniversary of King of the Road.”

When did you begin work on Gigantoid, and what was the band’s mindset?

We really started writing for it full time December 2013. We wanted to keep everything new, so when it came time to record and release this new record it was fresh sounding. We did record a new song, “Robotic Invasion,” for Scion A/V as part of their split 7″ series back in October 2013. We came up with 19 songs and we cut it down to our favorite nine at the time. In the past, we would work on songs for a while before we were going into the studio. This time, we wanted to keep it as new sounding to us as we could. I think touring In Search Of… and The Action is Go got me to write more sludgy, slower songs. Doing those two records live for the past two years rubbed off on my songwriting for sure. We also wanted to keep things as raw as possible.

What inspired you to start your own label At the Dojo Records?

It was time. We have been a band for 20 years and always had a record label release our stuff. We just wanted to try to do everything ourselves. It’s been fun so far, but at the same time [it] is a lot of work.

Was it easier having the major label out of the picture?

No. We have never had a record label tell us anything about our songs. I do remember Frank Kozik who used to run Man’s Ruin records said to us about our Eatin’ Dust release, “Have this one be the fuzziest yet.” That’s about the extent of a label telling us how to record.

No difference really. We come in to practice with riffs, have our drummer play beats to them, and if it sounds good, we keep it. We did want a more raw sounding recording. We heard a record by a band called MOAB and loved the recording they got. We found out it was their singer and guitar player Andrew Giacumakis who recorded their record at their own studio, and we hooked up with them.

Is there a lyrical theme on Gigantoid?

The lyrics really don’t mean anything too deep. Usually it only makes sense to me, but I explain kind of what I write to the other guys and they usually look at me as if I’m an idiot. [Laughs]

You’ve been re-releasing your old records on vinyl through At the Dojo. Has acquiring the rights and masters been stressful?

Well, the releases on Bongload Records No One Rides for Free and Daredevil were hard to get back. We never got paid anything or saw a royalty statement for the last 10 or so years, so we finally had to get lawyers involved and finally got those records back after they had been out of print for a long time. Not a lot of stress, but a lot of hassle. Daredevil will be reissued in 2015. We just reissued No One Rides for Free.

What have been your favorite and least favorite parts of being in Fu Manchu? 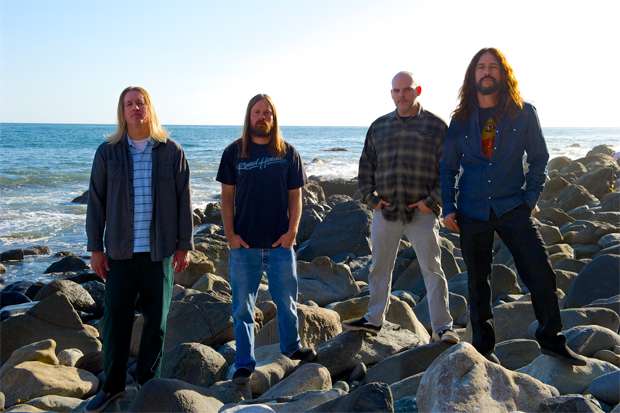