Interview: The Graviators Talks About The Occult & Their Album ‘Motherload’

Would you explain the meaning of your name?

MF: When I came up with the name, I was deeply into finding the ultimate truth, to find what some people refer to as God, and what I would like to call The One. And the answer I found, at that point, was that The One must be equal to gravity, the force that binds everything together. But The One is not only gravity; it’s everything and everyone. All is one and one is all. We also didn’t want a name with “black” this or “wizard” that or another word that has been used endlessly. We wanted something unique. If you google The Graviators, you’re gonna get The Graviators!

What was the inspiration for your Odin, Valhalla, and Valkyrie references?

JH: Leif’s last breath is about a Viking who travels the sea and meets his death bravely on the battlefield, and then this beautiful Valkyrie brings him to Valhalla. We always talked about writing a Viking song, and we actually tried once, but it ran out in the sand so to speak. But this song came very easy. Both the music and lyrics just came together effortlessly.

This album has a raw, live feel, especially in the loose drum tracking and the use of analog. What feeling did you want the record to convey?

HB: This is the second record that we’ve done with Berno Paulsson producing it. Evil Deeds [2012] was also recorded analog, but on that record, we used distance micing on the drums. I also opted [to use] a different drum kit on this album. Evil Deeds was recorded on a Ludwig Vistalite from 1978. I felt this album was a lot darker. So, I opted for my Ludwig classic maple, for a warmer drum sound. Also, we utilized close-up micing this time around. The feeling and sound we wanted to capture is the way we sound live, and at rehearsals. We wanted to capture that force. That is why we chose to record this one live; drums, bass, guitar, all in one room, recording at the same time. This was also a budget thing. We had eight days of recording, and we had to be real quick.

Why did you want to re-record “Druid’s Ritual”?

HB: This was actually a request from our record label. “Druid’s Ritual” is featured on our split with Brutus that was released on our previous label Transubstans Records back in 2010. I guess they thought it’s too good to live in obscurity on a limited split.

Why do you embrace the occult?

MF: I think that you have to work out some kind of life philosophy to comfort you and keep you sane in your everyday life. I did it in my early 20s. Death was haunting me a great deal when I was young. My best friend and I talked about it a lot, and still do. When I was 16, another friend of mine lent me a book by the Swedish occult author Dénis Lindbohm, a true magician who remembered many of his past existences, and off I went! And Johan and I have also studied a bit of what people like to call “white magic” with a witch from our hometown.

What makes you angry?

JH: The never-ending stupidity from politicians, like the right wing party that rules today. They don’t like to give grants to the poor. Instead, they reduce the compensation for the sick, students, unemployed, and senior citizens. Then they reduce the taxes for the rich, subsidized services for the rich. They try to create a subclass. Everyone who works 100% will get some tax reduction (around 200£ a year). You know, politicians cost a lot of money and they will absolutely fuck things up. There’s got to be someone who can fuck things up for half the payment you get as a politician, I know I could.

What is so powerful about the goat as an image?

MF: The goat as an image has been around for a long, long time. It has a deep resonance in the human psyche. Almost everybody has some feelings, good or bad, when they see these kinds of images. For Christians, it often resembles the devil and for people who know better, it stands for fertility. Or it could also just be what it is: a goat! Before Christianity came and fucked things up with endless wars and stupid morale, the goat was used in all kinds of pagan rituals and was in some places worshipped as a deity.

Who did your cover artwork for this album? How did it come about? 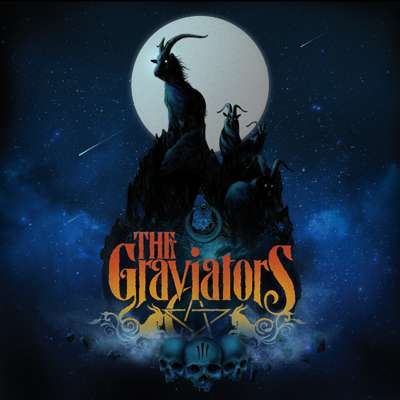 HB: The cover artwork was done by the amazing Vance Kelly. We’ve had the honor to have all our albums graced by his incredible art. Now, we’ve used Mother Nature as the main character on our previous two album covers, so this time around we wanted something different. So, after much debate within the band, we decided to go with the idea of having four goats on a rock floating around in space. We also told Vance to have the KISS album Creatures of the Night in mind when he [worked on] drafts. We are so grateful and fortunate to work with a world-class artist such as Vance. After our addition to the Napalm roster, he has done artwork for other Napalm bands like Legion of the Damned and Huntress. He’s also done artwork for bands like Down, Slayer, and The Cult.

How important are specific brands of equipment?

MF: It’s very important both for the sound and the look of the band. We have used this kind of equipment since we were kids. It’s like an extension of our bodies. You can’t go wrong with a Gibson SG, Ludwig drums, and an Orange stack if you want a kick ass ‘70s sound!