Interview: Hard Girls Are A Little Less Quiet And Take Things To The Next Level

San Jose’s Hard Girls have quietly produced some of the best punk songs in the last five years. The trio – who also make up 75% of Jesse Michaels’ Classics of Love – takes the classic punk rock fervor and mix in eclectic post-punk influences like Guided By Voices, The Fall, Wire, Pavement, and Television. Asian Man Records released their second full-length, A Thousand Surfaces, on June 24, 2014. After one prior LP and a handful of EPs, the band is finally ready to be a little less quiet and take things to the next level.

The new album is the first time you’ve really changed your sound. Rather than being subtle and brainy, it’s explosive.

I just thought that we should give a real shot at being a band instead of just doing it on the weekends. The songs are more impassioned, with something to prove. It came with an edge and a purpose. I spent a lot of time thinking about guitar parts. We played these songs so much and just tried to get all the pieces together, to get the energy to be as complimentary with each other as possible. I think this is our best set of songs. We’re not doing it for anyone else anymore. It propels the album quite a bit, having that in the background. It’s kind of a big gamble for us at this age. We’re leaving our jobs and putting our finances up in the air. Mike Park [of Asian Man Records], when I talked to him about this, he said, “Why didn’t you do this five or six years ago?”

Why didn’t you do this five or six years ago?

I was scared when I was younger. I was thinking that if I did that and it didn’t work out, I wouldn’t have a safety net prepared for me when I was older, but now that I’m older and I’ve been living the life of having a safety net, I’m realizing that doesn’t work for me at all. None of us are trying to make a lot of money on it. We’re just trying to actually be musicians instead of having to be second-class musicians who play occasionally.

This is the first album you’ve released on Asian Man. Why did Mike decide to put this one out? 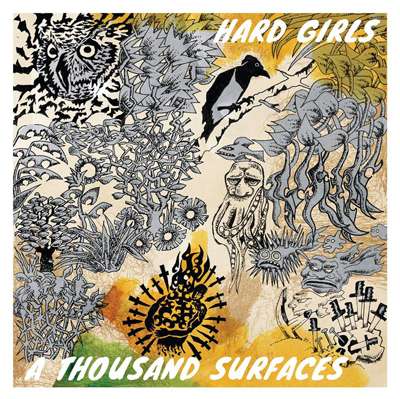 I called him to get his advice. I told him that I talked to [drummer] Max [Feshback] and [bassist] Morgan [Herrell], we’re going to give it a shot at doing this for real. He gave me a lot of worst case of scenario kind of stuff, to try to scare us out of it, basically. When we were still interested, he said, “I’ll put it out and we’ll try to really push it.” I think he would have put something out before if we had been serious.

While this album is more energetic, it also has some of your quietest moments, like on “Without a Sound” and “Samizdat.”

There’s a different form of tension you can get out of a quiet song, especially one that has dynamics. It just opens you up to being able to use dynamics instead of just starting out at the highest point and just staying there until the song ends, which is also cool. We weren’t going to hold ourselves to a particular style of songwriting or anything. There have been songs that have been outliers, and we’ve gone through some paths here and there in the songwriting style. We’re pretty open to whatever works in the song.

Max and Morgan have been playing together forever. They lock in to each other super well. I just want to be able to contribute something to what they’re collectively bringing. The songs come from them playing music together for the past 15 years or however long it’s been. We’re just playing the songs over and over again, just trying out ideas and seeing what works, getting away from playing chords a lot, trying to keep songs infused with new ideas.

Where did you record the album?

We went to Atomic Garden [in East Palo Alto]. It’s the same place we recorded the Classics of Love album. I just played guitar on Jeff Rosenstock’s new solo record there as well. It’s kind of become the new place for us to go. Jack [Shirley] is incredibly good at what he does. He’s extremely easy to work with. You just try out whatever you want to try out and he’ll make it sound good. He just encouraged us to do it and he found the right mics and the right sound. I feel like my guitar tone in particular was the best sound I ever had. I feel like it ended up more present than any other live recording we’ve ever done.

What have you been listening to lately that’s influenced your music?

There’s always the same base influences I keep in mind. One thing I’ve come to like more lately is that first record by The Slits. There’s lot of guitar parts, not just chords. It’s one of the coolest records I’ve ever heard. It doesn’t really sound like anything. It was produced by a reggae guy, but it definitely doesn’t sound like reggae. The guitar player [Viv Albertine], her playing has been pretty inspirational.

You guys have long instrumental sections in songs, which is atypical to punk. What role does this play in your music?

Lyrics should complement the song as opposed to overtly direct[ing] the song. When I first started writing songs, I wrote lyrics, and wrote music as a vehicle for the lyrics. Now I’m realizing that if the lyrics aren’t good, or if there’s no reason for one, there shouldn’t be one there. Also, it’s fun to rock. If it sounds good, just go for it.

PrevInterview: Final Conflict Talks About ‘Ashes To Ashes’ and Their Values Over The Last 27 Years
Interview: The Cutthroats 9 Are Raising Hell, Hopes and HighwaterNext