Interview: Jamie Woolford on producing his own record, potential touring, and ‘A Framed Life In Charming Light’

For those of you who are over the age of 25, you may know or remember Jamie Woolford from his days in the seminal Fueled By Ramen pop punk band, The Stereo. It is highly likely that many of you who are not yet familiar with the name Jamie Woolford, have heard his influence in such contemporary bands as fun., Fall Out Boy, and The Academy Is. Regardless, with the release of his new solo album, fans old and new will be more than satisfied with the catchy hooks and impressive instrumentation of Woolford’s debut. I recently had the chance to catch up with Jamie and discuss old memories and new horizons.

What was the catalyst behind making a solo record?

Well, I’ve kind of wanted to make my own record for years and actually, that first Stereo record, Three Hundred, was really kind of a solo record in its own way. Both Rory Phillips and I were intending to make solo records at the time when John Janick (then Fueled By Ramen president), encouraged us to team up. I’m actually glad it took me this long to finally do a real solo record because I’ve learned so much about music and making records in the intervening years that making this record before now would have been premature.

How would say the material on A Framed Life In Charming Light compare and contrast from your previous work with The Stereo and Let Go?

To me, it’s not that different, although I certainly think I took things to a more ambitious level. Often times an artist will be conservative out of fear. Fear of failure, fear of ridicule, fear of being too different, etc. I work hard to help the bands I produce to be fearless and obviously wanted that same fearlessness for my record too. It’s easy to have doubt when it’s your own material and you have to be careful to not feel paralyzed by it. Frankly, that’s the reason it took so long to complete the record once I actually began. I did all the principal tracking in 2 weeks and then I took 4 months off before I could start the vocals. I’ve always hated vocal tracking and feel I never capture my best singing. I knew I wanted this time to be different and the fear of failure was a big source of procrastination. Once I got started though, things went pretty well. These are my best vocals yet, certainly the biggest. My ideas were pretty big sonically and thematically so I really had to step up my game. There are some pretty big harmony stacks on this in 4 or 5 part harmony, all quad tracked. It was the only way to get that huge Queen-like vocal sound from a single vocalist. Track counts like that mean I have to be REALLY good with pitch and timing so that the end result doesn’t sound like a mess. Fortunately I’ve had lots of practice over the year with some of my clients like Gene The Werewolf and The Loveblisters who both have big vocal production on their records. 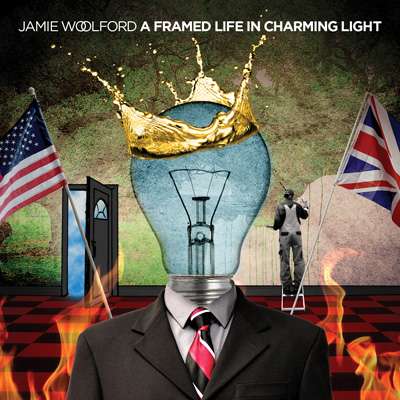 Did you record and produce the entire record yourself or did you bring other people into the production fold?

With the exception of the strings, a trumpet solo, and a few tiny other things, I did everything. I always wanted to make a record where I wrote, performed, recorded, and mixed every sound on it. Partly for the challenge but also cause it’s fun and to hopefully convince the drummers I produce that I’m not full of shit when I tell them not to hit their cymbals so hard. Being able to site my own performance on a record will go a long way to helping me convince clients I understand them and their instrument.

What was it that drew you to Get Well Records for the release of A Framed Life In Charming Light?

Get Well Records is a brand new label and I am proud to say that my new album is the first newborn. My buddy Ryan started the label with the intention of working with artists who are interested in using their release to promote and raise money for a charity of their choice. It’s kind of an experimental idea that will hopefully do some good for these causes and if we’re lucky, get people to see the virtue of paying for music again. The deal I have is very artist friendly and very fair. Not mention a significant portion of the proceeds (off the top) go to the leading organization aimed at ending human trafficking. I love that I’m involved with a label like this. Everything is very early days for Ryan and Get Well but he’s a smart guy and so far has provided me with everything I’ve needed to do a solid release. This is kind of a dream situation and I expect bands will be hounding Ryan once this thing takes off.

Can we expect to see “Jamie Woolford appearing live at” posters at our local clubs in 2013?

I’m looking into touring very seriously but currently don’t have anything booked as yet. Touring is A LOT different now than it was ten years ago. For better or worse, touring has become a very popular thing to do and that level of saturation makes everything that much more difficult. I don’t want to go out if I can’t do something that makes sense. I will say that we are planning something pretty damn cool for the release in January. Something we’ve never done before and we’re getting some pretty amazing people to be involved too.

What prompted you to do an online record release show as opposed to the traditional live setting?

Since most of my fanbase is scattered around the world and because there’s no tour planned, I thought it would be fun to do something new that everybody could tune into and be a part of. We filmed the performance to be released later but we had a lot of video tech problems which kind of ruined our hope of that. However, we have plans to make a sort of “movie” based around a new performance of the entire album that we’re gonna do in a few months. We’ll see how it goes. Stay tuned, I guess.

Having personally worked with you before on the mixing and post- production of The Chronicle, I know you are a bit of a mad chemist when it comes to your craft. What have been some of your favorite projects you’ve worked on behind the board?

Recently I would say the Gene The Werewolf record is one of my favorites. The nature of that band makes recording so fun. There’s a sense of humor to everything and usually that means to every idea we come up with, the answer is “yes!” Both records I’ve produced sound great and are really fun to listen to.

In September of 2011, your old band The Stereo reunited for the Fueled By Ramen 15th Anniversary Show. Are there any talks of doing any more reunion shows for The Stereo? What about Animal Chin?

We were taking steps to do a few more Stereo shows around the country after the FBR15 shows but the guys in the band had SO much going on at the time that the idea was kind of put on hold. I’m sure everybody is still on board; it’s just a matter of when and how. Since we are all scattered around the country and some of us have families, reuniting is a major pain in the ass. For the NYC reunion, we didn’t have our first full rehearsal until the night before the show. We had to prepare separately in advance and do this whole complicated computer playback thing to try to rehearse. It was really a feat that we didn’t completely blow it at the show. As for Animal Chin, I’m not totally against it but I’m also not that enthusiastic either.

PrevInterview: Death Valley High vocalist Reyka Osburn on ‘Positive Euth’ and “doom pop”
Interview: Hands Like Houses on being a part of Warped Tour, being signed to an American label, and ‘Unimagine’Next