Reeling in overt sarcasm and wit, Jar’d Loose’s second full-length, Turns 13, is a heavy, groovy record that manages to touch on sounds from the last four decades of commercial rock radio, while maintaining an allegiance to the AmRep scene and other bile spewing noise mongers. Every track is a twisted, strange and wonderful platform for vocalist Eddie Gobbo’s tongue-in-cheek lyricism and the confrontational, unhinged approach the band adopt as their modus operandi.

Produced by Pete Grossman (Harm’s Way, Weekend Nachos) and mastered by Today Is The Day’s Steve Austin (Converge, Unsane), Turns 13 dropped via the Path Less Traveled Records (CD and digital) and Threshold of Pain Records (vinyl) in late May, reintroducing the brave to this troubled troop of extremely likeable creeps.

Did you begin writing Turns 13 with intentions for a full-length or was the creative process more fluid than that? When did you realize this material would be a record? 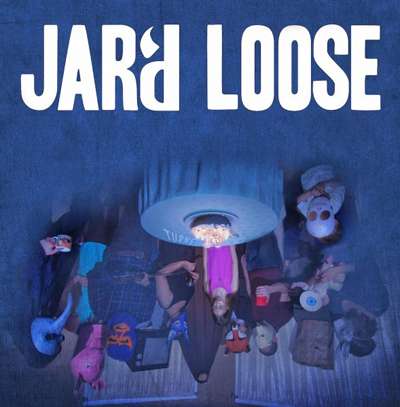 Right away. We knew we wanted the next thing we did to be a true full- length with ideally no weak moments. That was the goal. I think a lot of full- lengths these days are essentially glorified EPs, which is a shame. They follow a formula: the first half of the record are the four best songs, usually the only songs worthy of the record. Then the b-side contains the half-assed shit — the instrumental tracks, the weird noise interludes, and of course, the closing 13-minute song which has the singer screaming his ass off and feedback for the last four minutes. That’s not a full- length. That’s a long EP.

From the production and engineering side, who helped to bring that record to life and what did they bring to the table that changed its course or transformed it?

Pete Grossman engineered it. He did the last record, too. We’re a noisy band. What Pete tends to do is takes that and balance it with clarity, which is pivotal. Personally, two of my favorite engineers are Steve Evetts and Ross Robinson. I hear a lot of that in Pete’s stuff.

Then there’s Mr. Steve Austin, who mastered the record. I met Steve Austin in April when Today Is The Day came through Chicago and stayed at my house. When the band was talking about who to get to master the record, Steve’s name came up, and it was on! He sort of put a warm, Helmet Betty master to it, which was perfect. Steve, upon hearing us, totally got what we’re doing, as has Pete has since day one. If anyone working on your record doesn’t understand what you’re going for, no matter how much they try, their contribution is gonna suck.

I read an interview with Scott Ian recently about how they got Eddie Kramer, the dude who did all the Led Zeppelin and Kiss stuff, to record Among the Living. While recording, they realized that he didn’t know what the fuck Anthrax were supposed to sound like when the tracks started sounding like Def Leppard (who at the time were the biggest band in the world) mixes. The whole session became a fight, and I think the end result is the record sounding horrible. What makes that record are the songs being so good, but I think it could have been bigger than Reign in Blood, which sounds amazing.

Where there some changes or new benchmarks you were trying to achieve based on lessons learned from Goes To Purgatory?

Every song had to be catchy enough to stick with you after one listen. This record’s a lot more pop music oriented. Not necessarily Lady Gaga pop. More like R.E.M. pop. We also recorded Goes to Purgatory essentially six months after being a band. Since then, we’ve learned the ins and outs of each other’s musicianship, and that allows you to write music around to each other strengths.

What aspects or catalysts of heavy, noisy and weird music make it the go-to course for your artistic expression?

<We’ve all been in aggressive bands since we were 16. The first time I saw Eva (Bialecki) play a gig was at the first Riot Fest in Chicago when she was 16 playing with her punk band. Same thing with Phil (Hardman). He was in a death metal band back in the day and I saw him play a crapload. So aggressive music has just been our weapon of choice since we got in the game.

We love music that goes hard. I’d say any weirdness we have comes from our non-aggressive influences, actually. The working title for the song “Turning 13” was actually “Neko Case” because when we were writing it we felt it had sort of a Neko Case vibe wrapped in a metal song.

There are airs of sarcasm and wit in the lyricism for Jar’d Loose too. Is that a natural part of your personality that seeps through, or is the band an expression of ideas and feelings that aren’t normally tabled in that way?

Most people would say I’m a smart ass. Essentially my lyrics are an exaggeration of that. The best frontmen are the ones that wear their true personality. I loved David Lee Roth growing up, and still do. His douchey personality was so honest and true to what he was, and I loved him for it. Bless that man.

A Canadian music publication recently said “grunge is back” as a result of hearing the record. Do you think their association is accurate?

Recently, an ex-girlfriend emailed me out of the blue asking me if I could email her downloads of all my old grunge records because she got rid of hers years ago, and now wants to revisit them and she knew I was the only one that had them still. I did, and now she and her new boyfriend listen to them every night as they drink wine together and hold each other. So I’ve got that going for me.

Grunge never left my house. But I’m the only one who lives in my house, so that’s not saying much. Honestly, I’ve never once buried any music that has affected me positively in my life, and no one should. No guilty pleasures, no bands I “used” to listen to.

But yeah, we’re not a grunge band. Chicago, where were from, became the black metal capital of the world because bands who worshiped Darkthrone, or Bathory, heavily followed their blueprint, and did their own versions of that. The first time I heard Nachmystiym, arguably the most influential band in the last decade in Chicago, I thought I was listening to Darkthrone, or something from that era.

There’s no way you can put on a Jar’d Loose record and play it next to any grunge CD from the ‘90s and think they are from the same time, place, in the vein, anything. When the new wave of black metal became big, all the bands rallied behind the term “black metal.” They called their bands “black metal.” We will never fly any type of neo-grunge flag. We have carved our own niche.

For better or for worse, we really don’t sound like any band. We don’t want to be put under a lame subgenre umbrella like that.

Is touring more fun or work for you guys?

Good question. You know those dudes who do summer vacation style tour where it’s a bunch of dudes just looking to get naked and drunk with each other while wearing board shorts and flip-flops? Ugh. Those guys are the worst. To be the opposite of those dudes, you have to be business first on the road. But we have a blast touring for sure.

Do you have any remarkable stories from time travelling with Zeke?

We actually only played one show with those dudes, but it felt like three shows. We were so stoked about that show, especially Eva and I. We talked their ear off! That’s not really common for us.

We’ve been lucky enough to play with Obituary and Fu Manchu, which are huge influences of ours, and we didn’t say much to those dudes other than “thank you.” But Zeke rules. We drank a lot with them and then realized we had to play a show, and sucked! I remember our new guitarist, Nate, saw us there for the first time and said we were “good,” sarcastically. Great time though!

I remember reading some of the tales of debauchery from when Planes Mistaken For Stars were full-fledged road dogs (i.e. their Buddyhead interview…). Do The Swan King, who you are currently travelling with, get down like that?

Planes were total road dogs and we respect the hell out of what Jaime from The Swan King did for years with them. The best story he told us was this one where they were driving to a gig. A semi had flipped over, and for whatever reason, it was carrying bees. And all these bees were just flooding the highway attacking people. Everyone had to roll up their windows.

I recently saw a press photo for Enabler and their new drummer was wearing a Jar’d Loose shirt. Were you aware you had a fan in that camp?

No. He’s a smart man, though. And his band rules, too.

You happened to mention Game of Thrones in a recent interview. How are you feeling about the new season?

I actually don’t watch the show. I saw it once and was bored out of my skull. I watch like two shows currently, and one of them is Veep, which I love. It follows Game of Thrones. I love the Game of Thrones fans though! Like my friend Pauly, for example. He watches GOT as it airs live, takes a break and immediately watches it again, watches it when he comes home from work the next day, and then watches it once randomly during the week. Hi Pauly.

PrevArtist Spotlight: Chris Shary
Interview: To Kill A King Talks About Acceptance Outside Their Home CountryNext