Interview with guitarist Jonny Wickersham  |  By John B. Moore

Jonny Wickersham, probably best known as Jonny Two Bags, has played guitar in some of the most influential punk bands, including U.S. Bombs, Youth Brigade, The Cadillac Tramps, and for the past 14 years, Social Distortion. But everyone wants to be a frontman now and then, so Wickersham has just put out his first solo record. Turns out, he also makes a pretty stellar singer.

While you can’t deny the punk influences on his record Salvation Town, it slants much closer to Americana and folk. Working with longtime friend and producer David Kalish (a longtime collaborator of Rickie Lee Jones), they pulled together everyone from Pete Thomas – who has been backing Elvis Costello for decades – to Jackson Browne – yes! That Jackson Browne – to work on this record. The sound is as impressive as it is unexpected. Wickersham was cool enough to talk about the album, his influences, and the next Social Distortion record.

You’ve been playing in bands for decades now. How long have you wanted to put out your own solo album?

It’s difficult to nail down exactly when I started to think about doing something on my own. It just sort of developed over the years. As a kid, I would listen to my father’s records and depending on what band it was, I would imagine playing different instruments. Sometimes I wanted play bass like Paul McCartney, sometimes I wanted to be the drummer like Keith Moon, but mostly I wanted to play the guitar like my idol Jimmy Page. As I got older, I started to appreciate songs, lyrics, what was being said. I guess that was probably around the time I started hearing punk rock. Eventually I started to develop some ideas of my own that went beyond my usual duties as guitar player. Actually I can’t really say that I’ve always wanted to do a solo record or be a “solo artist” as much as I wanted to front my own band. I think this has a lot to do with always feeling like I wanted to do something different than whatever band I was in at the time, as well as wanting a situation where I wouldn’t have to compromise the way you do in a band. Not to say that I haven’t loved every band I’ve been in, but aside from the Cadillac Tramps which I helped start, I’ve basically been playing in someone else’s band.

Why did now seem like the right time for this record?

I’ve realized something interesting in the process of making this record and everything that comes with it. Having been a sideman and/or band member for most of my life, I can see now that I’ve been in a relatively safe place. It’s a lot easier to put yourself out there when you’re part of a band. It really is kind of an “us against the world” thing, so you never, never have to take any of the heat as an individual. As a sideman, you really don’t have to take any heat at all. I guess I never really had the confidence to do this until now. I knew that it was something that I needed to do and that I’d been putting it off for far too long. I didn’t want to look back and regret not having made a record of my own. As far as the timing, that really has more to do with the fact that my good friend David Kalish, who recorded it and produced it with me, had been trying to convince me to start working on this for a long time and finally got me into his studio by presenting the opportunity to record a song with Pete Thomas. I am a huge fan of Elvis Costello and the Attractions/Imposters and I have always been aware of the fact that those records are just as much about the players in the band and the production as the songs. Needless to say, that was an opportunity I just couldn’t pass up and so we started with one song and eventually had an album.

For those who just associate you with punk music, the sound could be a surprise. Can you talk a little about about your musical influences on Salvation Town?

I can see how it might take some people off guard, although to me this album makes perfect sense. I’ve been around various forms of American roots music my entire life. My father was a working musician. So from the folk/country and rock ‘n’ roll music that was in my home as a child – Kingston Trio, [Bob] Dylan, Hank Williams, Willie [Nelson] and Waylon [Jennings], Leon Russell, Jackson Browne, and The Eagles, Warren Zevon, Linda Ronstadt’s Heart Like a Wheel has been a lifelong favorite – to the blues-based rock of Zeppelin and the Stones, which eventually led me to blues artists such as Howlin’ Wolf and Elmore James. When I got into punk rock around the age of 13, I also found the roots and rockabilly bands that were part of that scene – The Blasters, Levi and The Rockats, Stray Cats, Pole Cats – all the cats – Los Lobos, The Paladins, James Intveld, and The Red Devils were all on a great compilation called LA Rockabilly. X had an undeniable Americana influence. The bluesy, stonesy slop of Johnny Thunders, The Gun Club. Elvis Costello was writing great country songs from the gate. I absolutely loved The Pretenders, Rockpile, Nick Lowe, and Dave Edmunds. All this music had some foundation in American roots. As time went on and the punk scene evolved, I gravitated to this area rather than to the thrash/metal side. That’s not to say that I don’t love the Bad Brains and the Cro-Mags. One of my favorite bands of all time is Rudimentary Peni from the U.K., so I love punk rock for sure. Around the time we were getting The Cadillac Tramps together, Mike Ness turned me on to Jason and The Scorchers. He was writing the Prison Bound album at the time and I think they were a big influence on both of us. Then there are more contemporary influences like Lucinda Williams, The Drive By Truckers, Ryan Adams, and Wilco. I think these artists are so great and there is a little bit of all of them in these songs.

How long have you been working on these songs?

Then You Stand Alone” and “Forlorn Walls” go back to right around the time I started playing with Social D. “The Way It Goes” was an idea that goes back maybe a little further, but I finished it while we were recording the record. “Clay Wheels,” “One Foot,” and “Ghosts” are from around ’06-’07, “Avenues,” “Wayward Cain,” “Alone Tonight,” and “Hope Dies Hard” were written not long before I went into the studio to start the record.

Working with Kalish was great. We’re great friends, which means that we definitely clashed at times, but for the most part it was a very productive experience. Without him this would have been a different record in many ways. He is a very talented engineer and he has an amazing ear in terms of performance and sound. He gets the drums to sound amazing. He gets fantastic performances out of the players and comes up with great ideas for more subtle things like overdubbing timpani over a tom tom part or adding a press roll to the beginning of a song. I bring the songs and ideas for parts and arrangements to the table, but David makes them sound fantastic. 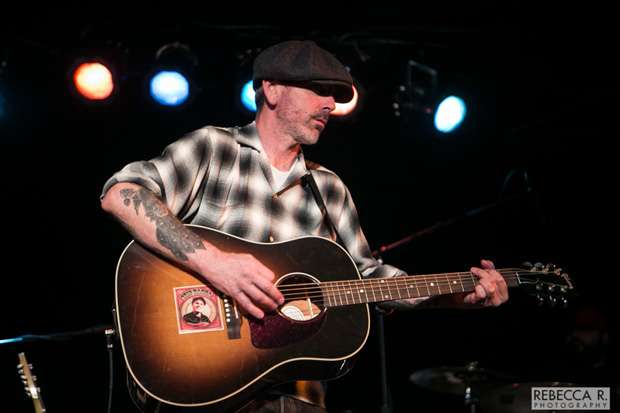 You have a great collection of guests on this record, including Jackson Browne. Did you know all of these musicians prior to working on this record?

Kalish rounded up most of the players, with the exception of guys I already knew like Brent Harding, Dave and Vincent Hidalgo, and Zander Schloss. The way Jackson ended up singing on the record is pretty funny. “Then You Stand Alone” was originally more of a punk or rock ‘n’ roll type thing, but as this version started to shape up, I commented on how it was beginning to sound like something Jackson Browne could have done – real SoCal vibe-y – so about a week or so later, Kalish tells me that he’s going a party or club or something and that Jackson was supposed to be there. So I said, “Why don’t you ask him to sing on this track?” of course never really thinking it was even a possibility. Next day, I get a call from Kalish telling me that Jackson agreed to do it. So amazing! Then we take it to the next level a couple weeks later, and get David Lindley on the song. Jackson AND Lindley? That’s like winning the guest musician lottery! This record is really about the musicians who performed on it. I stand behind my songs, but like I said, this could have been a very different record, and I feel very, very fortunate to have these people play on my first record.

Do you plan to put a band together and tour after this album comes out?

Absolutely. I’ve got a great band together that currently includes Dave and Brent, as well as my old friends Mitchell Townsend on guitar and Jordan Shapiro on pedal steel. Kalish is playing B3 [organ]. We are touring in April/May supporting Chuck Ragan and The White Buffalo. I’m really excited. It’s going to be a great tour.

Any plans for another solo record?

Yes. I’ve got songs and I’ve been starting to think about the direction for another record.

Has Social Distortion started work on the next album yet?

Not yet. I imagine we’ll fire the Social D machine up later in the year. We’re pretty much on hiatus right now.

What’s next for you?

Tour this record as much as possible!

PrevInterview: Banner Pilot Keep It Real And Give Us A Souvenir
Interview: Ringworm Discusses Their World of ArtNext