Fall brings out all the crazy rock ‘n’ roll magic: spooky décor, Blink 182 reunions, pumpkin beers, and lotsa bands touring to The Fest. So we picked one of these tour packages (Kali Masi, Sam Russo, and Tane from Tightwire) heading to Florida and peppered them with five quick questions.  Their tour starts in a couple weeks, and here are their goofy replies: 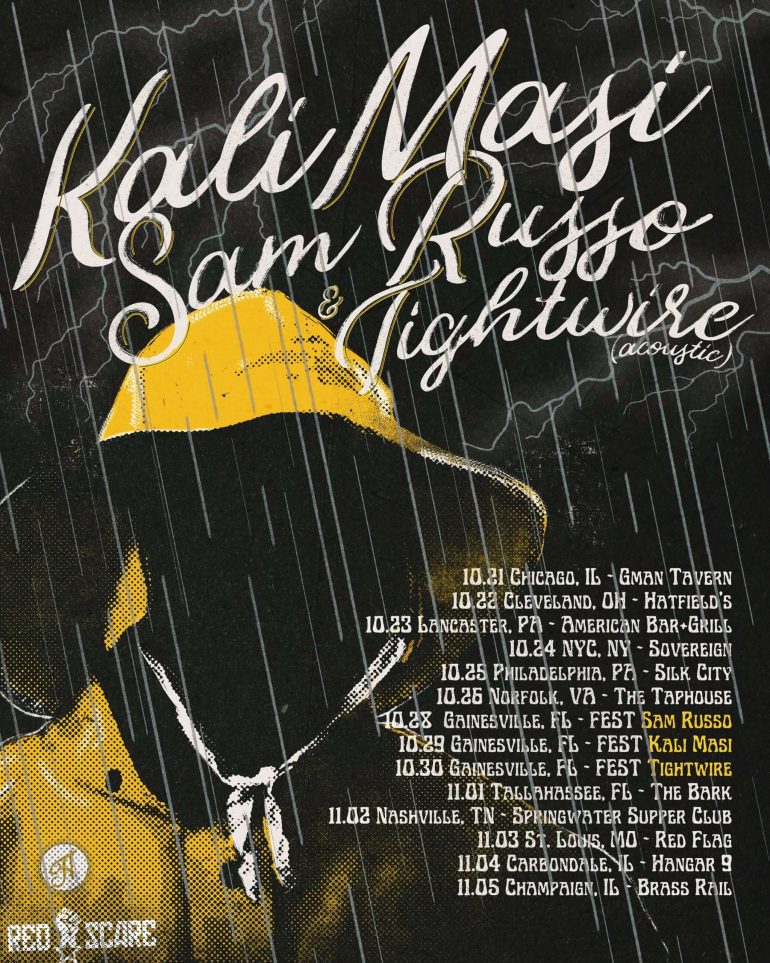 So you’ve all played The Fest in Gainesville, but aside from that show, what is your favorite music festival, and why?

Kali Masi: Chicago is RIPE with amazing street festivals every summer, and they’re all free. Do Division and the Logan Square Arts Festival have always put on wonderful, inclusive, dynamic lineups that bring me back every year.  I’ve seen some of my favorite bands there and have been going since I was in high school.

Sam Russo: Brakrock in Belgium! It has a castle stage right next to a bar; that’s tough to beat.

Tane from Tightwire: Whatever festival 311 or bands like 311 don’t play.  White boy reggae pisses me off.

This tour hits some wild spots: Amish country (Lancaster, PA), the oldest bar in Nashville, Norfolk, VA (which is basically a huge Naval battle station), etc.  What’s going to be the WEIRDEST show?

KM: You know, if I’m going to put my money anywhere, it’s going to be on the Norfolk show. In all of our years as a band, we’ve never played Norfolk, and people that live that close to an ocean are STRANGE. We played with Less Than Jake in Virginia Beach, which is close by, and I ended up in a haunted house holding a pair of nunchucks.

SR: The weirdness vortex generated at the Carbondale show when I reunite with those Copyrights boys will be visible from space.

This tour has acts from Minneapolis, Chicago, and the U.K. What is the single best food item from your region, and why?  Send forth your champion!

SR: Fish and chips with mushy peas, curry sauce, a pineapple fritter, and a pickled egg! Best seaside fare your American Guts ever dreamed of.

TW: Juicy Lucy!  (Editors’s note: a Juicy Lucy is some form of perverse, cheese-infused burger they eat in Minnesota.)

KM: I’d be lying if my answer was going to be anything other than pizza. But the Chicago vegan scene is incredible as well. Grateful that My Pi does vegan and non-vegan pizzas right!

None of you have ever met the other bands, and yet you’re traveling together across the U.S. in one vehicle. So the question is: Do you enjoy fighting with complete strangers?

KM: I’m a do-no-harm, take-no-shit type of person. From what I understand of our traveling companions via their music/internet presence, I can’t imagine there will be many fights. Fingers crossed. Tour’s wild.

SR: I hired a private eye, and I got what I paid for.  Turns out my plane tickets are non-refundable.

Alright, ending on a positive note: What’s the ONE thing you are most looking forward to on this tour?

SR: Toby Jeg has promised me a real American Halloween in Florida!  I feel it may end up being the greatest night of my life…

TW: This is my first tour totally (willingly) sober. So I’d have to say remembering all the new people I meet!

KM: I’m pretty pumped to be packed into a van with Sam, Tane, and Adam! (It’s his first tour.) There’s not many opportunities as an adult to form strong friendships, but touring creates a space to do that.