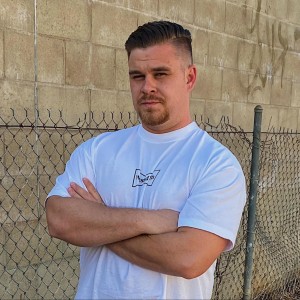 Allowing yourself to be imperfect is pivotal to being an artist. Blurring the lines of genre and vulnerability is what Yosef “King Yosef” Pelletier delivers with each of his efforts. Riding the high off of his recent EP The Ever Growing Wound, Pelletier continues the mayhem and the authenticity.

Coming off a two-year pandemic, Pelletier describes his mindset while creating the EP as how “writing this project came after finishing a larger body of work. So, it felt like all the pressure I had been putting on myself had lifted a bit. I gave myself a bit more room for error and exploration which lent itself to me feeling a bit freer in the process.”

The title for the EP, The Ever Growing Wound paints a vivid picture. The significance and direction of the title is based on how “The Ever Growing Wound is a metaphor for internal pain that carves out a piece of you. An ever growing wound to me, in real world circumstance, would be a canyon, which is where the Ennio influence came in. My goal with this has been to layout the path comes ahead and the title plays into that.”

Pelletier continues with “as time goes on, I find it easier to write and build a world when I can attach real world things to ideas I am expressing.”

This EP serves as a prelude of what’s to come from Pelletier moving forward. Releases following this project are aimed to tell a cohesive story stemming from one project to another. Pelletier best described it as “the spaces I am trying to create for myself are places where I can dive into things that hurt, confuse, or empower me. So, via that thread they will always be connected. The next project feels very much a part of TEGW to me.”

Pelletier weaves his tales of sorrow and pain through a mighty pen. The writing on The Ever Growing Wound has evolved with such a force. He shows his stories through his sonic frequencies rather than just simply telling listeners his messages. As any great writer, Pelletier keeps his pen game strong through reading. He said how “reading helps a ton. I try and focus in on authors that inspire my sort of visual vocabulary. Finding people who phrase things in a way where I am like “Wow, I wish I had written that” and then dissecting why and how it makes me feel that way. Otherwise, it’s a lot of starting simple and replacing words until I get to where I want.”

With great writing comes exceptional production for Pelletier’s projects past and present. The synthesizers, the drums, the strings, shit even the vocals all sound so alive and in your face. This goes without saying that reaching such a level of production requires facing challenges.

“Like I mentioned earlier, I gave myself room for error on this. So, the whole thing was DIY, which all my other releases have been but, this was the first time I went to a new studio, and we tracked out a live kit for all the songs and had much more guitar in the record. Therefore, the mixing and editing was a whole new process from me vs. my older releases that are just myself and electronic elements. I came out with a lot more knowledge of how to get where I want much faster,” says Pelletier.

Each project for Pelletier is also learning experience from the production side, the writing, and even himself. He noted an important insight learned while creating The Ever Growing Wound as “how much more I enjoy the process of writing and recording when there are organic instruments involved. I despise programming a drum kit VST so being able to have Lynden just come in and understand where I am coming from and elevate the writing was amazing. Having a team in general just makes thing easier and less maddening.”

The Ever Growing Wound is the beginning stages of the “King Yosef Project” which is referring “to a group of people and not just myself anymore,” describes Pelletier. The collective is curated with “my live band members who are my best friends. Cameron and Lynden are a huge part of the next steps I am taking. Lyn played and helped write most of the drum parts on the EP and same with Cameron for guitar. I get to have these ideas that I can give to the two people I trust and then they get filtered into a place I wouldn’t think of. I can’t imagine the tracking of the next projects without them.”

Pelletier set the stage right off the bat for the EP by discussing his internal pains. The opening track—also one of his personal favorites— “Fair Bloom” elaborates those personal struggles that helped inspired this EP. Pelletier refers to the content of this EP as how “the point I came to with music was, ‘I need to use this as a place to grow and heal,’ and that’s what I feel like I am finally achieving. The things I am talking about is me peeling my own layers back and tackling the things I was too young to understand at some point. My relationship with family, God, myself etc.”

He followed up by giving advice to listeners, saying: “My best advice to anyone would be to accept that you are human, and things hurt but inevitably they fade, and you forget. It’s just a matter of letting it and moving forward.”

For more from King Yosef, find him on Bandcamp, Spotify, and his official website.

PrevInterview: Fixation’s Mikey Bifolco Dishes on Band’s First Full-Length LP, ‘The Secrets We Keep’
Interview: …And You Will Know Us By the Trail of Dead’s Conrad Keely Talks 11th LPNext