Interview with guitarist and keyboardist Justin Fox (JF); vocalist and guitarist Russell Edling (RE); and drummer Pat Conaboy (PC)
By John B. Moore

No one is quite sure how Kite Party first caught the attention of their new label – neither the band nor Animal Style Records – but it’s pretty obvious to anyone who has heard the new album why they were signed. Come on Wandering, Kite Party’s new full-length, is indie rock raised on punk music. The band’s bio sums it up best, claiming Kite Party’s music is for “anyone who wishes that maybe The Replacements had kind of been a shoegaze band.” Though most of the band members grew up about two hours north of Philadelphia, they managed to flee their hometown for the City of Brotherly Love right after graduation. They put out their debut, Baseball Season, in 2011, and though it was a solid release, Come on Wandering is bound to bring them to a much larger audience. Three-fifths of the band – guitarist and keyboardist Justin Fox, vocalist Russell Edling, and drummer Pat Conaboy – field a few questions about the band.

The band has been around for a while now, but there have been some changes. How did you end with the lineup you have now?

JF: The original lineup of Kite Party – Russell Edling, Justin Fox, [current vocalist and bassist] Tim Jordan, and Pete Knepper – all grew up together in Tamaqua, PA. There was a small scene of bands in our town and a community center that we and some of our friends would book punk shows at about once a month, so we were all around music a lot. There wasn’t a whole lot else to do. The typical post-high school graduate’s main M.O. in that town is to get the fuck out before it sucks you in, so we all made plans to move to Philadelphia together, since it was close enough to where we grew up that we could still make it home when we wanted to. That was important because Tim was still a senior in high school when Russell, Justin, and Pete moved, so we went through a year of Tim getting done with high school on Friday and driving down to Philly so we could practice and vice versa. We met [guitarist] Andre [Pagani] in August of 2008 when he saw our band play a show and gave us his email so that we could send him a download of our first EP that we didn’t have any of at that time. Justin lost that email and never sent it. We all ended up becoming friends, though, and at some point, the idea came up to add him to the band. It worked really well so it stuck – it felt like there was immediately a lot more that we could do as a five piece. Pete left the band shortly after we recorded Baseball Season to pursue graduate school. Around that time, Pat and Tim had started playing in a band called Idiot Kid and we had all been becoming friends with him through that. We asked him to come play with us and he showed up knowing all the songs, so we didn’t try anyone else out and went on tour with him about a month or two later.

So none of you are from Philly originally?

JF: None of us are from Philadelphia. Justin, Russell, and Tim are from Tamaqua, PA, Pat Conaboy is from Clarks Summit, PA, and Andre is from New York City.

It seems like a phenomenal punk and indie scene just popped up in Philly. Or has it been there all along and nobody noticed?

PC: I think it’s a little bit of both. The scene that everyone seems to be talking about was super underground about five or six years ago. There were a lot of house shows with lineups that would be hard to believe these days. I think that, like any city that gets associated with a certain genre of music, Philly had a few bands from the same scene get more and more successful at around the same time. As a result, people became interested in some of the lesser-known bands, and realized that there were a lot of people doing cool things with music. Most of what’s going on here has been slowly building for a while, and I think public perception gets a little clearer as time goes on.

JF: I still can honestly say that one of the only people I play music with who is actually from Philadelphia is Pete Pie from the band Address.

To what do you attribute to all the great bands coming out of here right now?

What can you tell me about the new record? 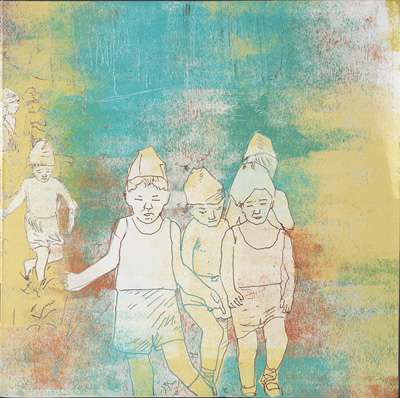 RE: The new record seems very natural to me, it is a very logical next step. I think in some ways, it is a lot more in keeping with what we wanted to do with Baseball Season, and in other ways, I feel like it still shows a band in a bizarre adolescent phase. This is the first record with Pat playing drums, so that was a new thing for the new record. With Baseball Season, we just kind of recorded songs we had and [did] everything more on the fly, whereas this record was a lot more deliberate every step of the way. I remember Justin saying he wanted to be more deliberate with our decisions on this one, and I think we did that. I also remember Justin saying he wanted to wear a poncho more this year, and I really hope that works out, too.

Who did you record with?

PC: We did this record with Kyle Pulley and Joe Reinhart at the Headroom in Philly, located within the confines of the world famous Big Mama’s Warehouse. For those who don’t know, Big Mama’s is an incredible warehouse space in North Philly that is filled with the brainchildren of the people who live there. It’s magical and you can sit for weeks and look around and find something new and interesting every five minutes.

JF: We started recording in the first week of September [2013], and tried really hard to get it all done by the beginning of December – at one point we were recording vocals at my house, weirdo extra tracks in a different room of the studio, and mixing in the main room all at the same time to try and get done on time. We didn’t really get all of it done, though, because we were constantly changing so much stuff and getting caught up in details, so we spent the next two months going into the studio whenever they had an open night (usually between 1 and 7 AM) and tried to finish it that way. It was pretty miserable – there was one time where we worked all night on the song “Follow Me” and Kyle was like, “All right, let’s listen to it,” and I fell asleep within the first 15 seconds, because it was so fucking late. That kind of stuff would happen all of the time. We managed to pull it off, though, and we finished it around the middle/end of February. We recorded it with Joe Reinhart and Kyle Pulley with help from Evan Bernard and Matt Schimelfenig.

There is a DIY punk vibe to this record, despite the complexity of the music. What were your influences growing up versus now?

JF: We all grew up on punk. Russell and I got to be good friends when he started introducing me to Rancid, Operation Ivy, NOFX, and all that shit. I met Tim from him being around that whole scene of us listening to punk and skating. We were all going to shows for the whole four years of high school, so the first bands we were in were definitely super punk. Andre and Pat were both doing the same thing in New York and Clarks Summit, too. For a lot of us, though, we started to kind of get a little bored with listening to the same bands since we all got into punk so early, and started to branch out. For better or for worse, I feel like we were lucky to be coming up in the age when pirating music was obscenely easy, because I downloaded all kinds of weird shit. Russell’s brother-in-law also had an insanely huge collection of CDs, so we would always be borrowing lots of indie rock and older punk stuff from him and getting into other stuff that way. By the time that most of us were in our late teens, we weren’t really making music that was immediately punk anymore. That vibe always stuck with us all, though. The DIY scene always felt the most real and we all always felt most comfortable playing basement shows where everyone was there to watch bands, rather than playing bar shows where it felt like it was pulling teeth to get everyone to watch a bunch of kids in their early 20s play music that wasn’t totally punk or totally indie or whatever. We all want to get some visceral kind of feeling out of playing music – none of us want something that is totally controlled and calculated all of the time, especially when playing live. The best shows are the ones that feel unhinged and loud, and it’s maybe more fun to do that without relying on power chords and fast beats all the time.

How did you guys connect with Animal Style Records?

JF: None of us, including Animal Style, totally know how our music reached them. We recorded our last record, Baseball Season, a couple years ago. No one really wanted to put it out and we had a tour coming up with Tigers Jaw and Three Man Cannon, so we really wanted to make sure that we could push the record. We decided we would just put it online and make a bunch of homemade CDs to sell. I got drunk one night and just decided I would submit it as a news story to Punknews and they posted something about it. We got asked to play Fest shortly after that, I’m assuming since Tony [Weinbender, who runs Fest] heard it there. During the Punknews coverage of the Fest, we made a list of top 10 under the radar bands that you should see at Fest 10, and I think that was probably where Matt [Medina] from Animal Style heard us, because he contacted us around then. We met him at Fest, all talked about it, and then decided to work with them. We have a great relationship and we’re super happy to be doing this record with them.

What’s next for the band?

JF: We want to tour a lot, we want to make a lot more music; we want to keep doing what we have been doing. We’ve all been at this for a long time and all love doing it, so we want to see how far we can take it before we start to hate it or start to suck. Whichever happens first.