Interview: Lockjaw Talk About Their Evolution, Live Shows and Struggle To Get Signed

Lockjaw have been creating industrial rock, or what they refer to as Hell Rock since the late nineties, when Medavon was the sole member of the band. They’ve since released several albums and EP’s, having currently released The Dirt Road To Inspiration last year, with a new record already on the horizon. I spoke with their mastermind as he described the band’s evolution, their live shows (having opened for both Marilyn Manson and KMFDM, among others) and their struggle to be signed to a proper record label. The story of Hell Rock is quite an interesting one, and it’s a shame that it’s gone unheard for so many years. Until now, that is…

First of all, tell us about the band. How long have you guys been playing music and how has your sound evolved from the debut album to the present release, The Dirt Road To Inspiration.

I released the first Lockjaw album Looking Like A Devil in 98 and was the sole member. It was a trip hop based album that had a darker presentation but lacked any metal or industrial flavor. Before that album I was recording more abrasive material which I shortly returned to after the first release. The live incarnation started in 2002 and since then Lockjaw has become more of an industrial metal band, but we categorize our sound as Hell Rock. It has so many elements that it doesn’t always fit in a specified category. As members have changed over the years, so has the live sound. The current lineup is by far the most metal. The sound often changes a little from album to album depending on how and what has been inspiring me in my life.

Since the release of The Dirt Road To Inspiration, you’ve released well over ten albums in your career. Have you ever been approached by a record label?

Roadrunner Records approached me on the first release and were really interested in what I was doing. I sent them some follow up material and it either wasn’t what they were looking for or the A&R guy I was talking to was let go. Since then I have submitted a few to some labels.

Explain the writing and recording process for The Dirt Road To Inspiration. Where did you record it and how long did it take? What is the atmosphere like during recording, and was this record more difficult or easier to create than your previous albums?

I have a home studio where I have recorded the last five Lockjaw albums, so the atmosphere is always as good as I make it. It often involves lots of green. This particular album was mainly recorded last summer and was more positive based with less anger then previous ones. It was just as easy as the rest. Once I get started the albums just flow out as long as I’m feeling inspired. I’d say it took about two months to actually record.

This record seems to be a little lighter than your previous release, White Lies, Black Heart. What was the mood that you were going for with the album? 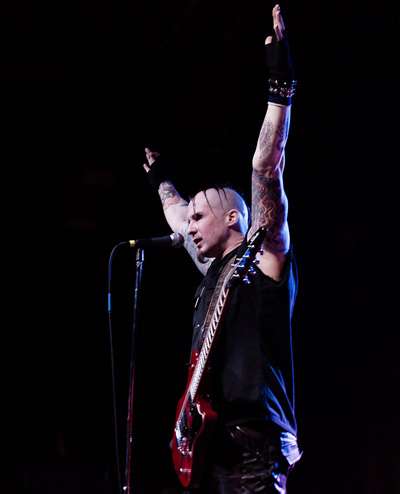 With this album I was going for a more organic sound. I felt like it took a musical step forward in experimentation but may not have been as in your face. I was feeling many different vibes and some songs ended up more doom influenced while others were more synth layered and melodic. The next album will be different as well and is headed more in the industrial “bash you in the face” route.

Lyrically, how might you describe Lockjaw’s music? What kinds of topics do you deal with on each of these albums? Do you still feel the same way about certain topics now, as you did on past albums?

The earlier albums were more about debauchery and decadence and crazy things that I experienced and needed to get away from. I’m always trying to find myself. It seems that earlier albums tend to remind me how lost I can sometimes get. Often the underlying message was a bit negative but very cathartic to expel from me. Nowadays I feel the lyrical message ends up being more positive on most tracks. On a few I voice my complaints about the established social system and the constant struggle to make ends meet in a world that out sources everything that was once sacred. Sometimes it is hard for me to get in the head space and perform tracks from ten years ago because I’m not the same person. But our fans love the classics.

Looking at your albums for sale on CdUniverse, I can see that you’ve made several interesting albums over the past number of years, yet are still struggling to find a proper label to release all of this music onto. I’m still kind of puzzled as to why a label wouldn’t want to sign an artist with this much of a prolific output behind them. There’s no reason in my mind why the whole discography shouldn’t be reissued and re-released with a strong label output. Why do you think it’s so difficult to find a label these days?

I appreciate hearing that, thank you. I’m not sure what the problem is. Maybe I haven’t sent the right album to the right label. My live lineup has never been stable for more than a few years and transportation has confined us to the Midwest. The last few I didn’t even submit to anyone because my faith in finding success that way has become jaded over the years. I just sent the new album to Metropolis Records, so maybe my luck will change this year.

You’ve been using other sites to sell your merchandise independently. How is that working for you? Do you think that it is a good move for bands to release things independently in certain situations?

I have had the best success using CDBaby to distribute my music and get it on all the digital media sites like Itunes, Rhapsody, Spotify, etc. I would recommend it to any band out there that has independently released an album. We also have some of our albums on Pandora. I try to get our music to any place that can help the cause of more exposure.

Who would you consider your inspirations on this album and throughout the history of the band? What made you decide to play music?

When I was twelve years old I bought Motley Crue’s Shout At The Devil on cassette. After that things were never the same and I have lived and breathed music ever since. More so what I call Hell Rock – music about sex, drugs and rock n roll. Dirty, dark and demented. That style always struck close to my heart. Not overly serious but embracing the power and excitement of music. My influences are pretty diverse from Skinny Puppy and NIN to 80’s thrash metal, (Metallica, Megadeth, Kreator) and sometimes Elton John and Fleetwood Mac. Other times it’s Tricky and Massive Attack. On the new album I took a bit from the doom masters Black Sabbath. I listen to a lot of Ohgr and his solo albums, so I’m sure those have also had a subconscious influence.

What do you do when you’re not playing in Lockjaw? Do you have a day job, or perhaps any other bands that you play in that we aren’t aware of? If so, how do these acts differ from the work in Lockjaw?

I am primarily a guitar teacher by day. I have been doing that for seventeen years. I book bands at a premier venue in Milwaukee County called The Metal Grill. I have another project/band called Murder Love God. It is more electronic and industrial based then Lockjaw. I have released four albums with Murder Love God and was on an indie label for a little while, but it recently went belly up. I have been doing a side project called In OrgAnic more recently with Michael X. Christian. I also started doing some remixes here and there and will have a Mother Love God remix of a Hate Dept. song on their next release. The difference with doing anything outside of Lockjaw is that I feel no pressure to meet any expectations. It is more about what comes out and not really caring too much about how others will interpret it. So it’s way more experimental. Lockjaw is my chains, but everything else is my freedom. 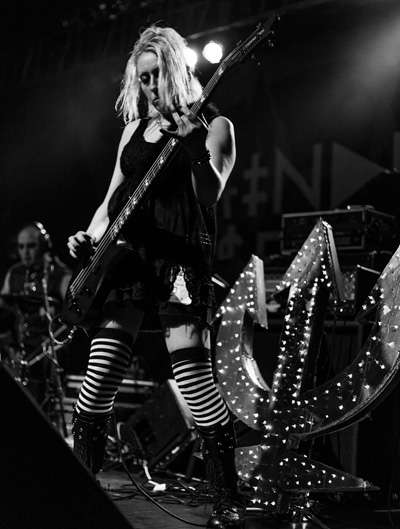 The first time Lockjaw opened for Manson will always be my most memorable musical moment. It was November 12th, 2004 at the Eagles Ballroom where I had seen my first concert when I was thirteen (Metallica, WASP and Armoured Saint). It was sold out, with four-thousand screaming people that were really into us. We played better than we ever had, and for the first time we were really treated like a professional band. It took months for that moment to sink in as it actually happened and maybe even a few break downs after. Then a few years later the same opportunity came our way. Oddly enough we were more nervous the second time. The least memorable or most uncomfortable was when we opened for KMFDM in 2005. They were pissed because one of their openers was taken off the show and we were on it. We were given two green flood lights. We had technical problems with our click track going out through the mains. A click track is what just the drummer hears to start and follow in time. Most of the crowd just stared with arms crossed. But we actually did okay on merch that night. (Laughs)

What lies in the future for Lockjaw? Is a new album coming out this year?

I just started working on the new album. It is gonna be more metal at times and more industrial at times. I have a lot of bad feelings to get out and turn into Hell Rock classics. Hopefully you will see that this fall. Until then we are playing live where ever we can and trying to get our name out there. It would be nice to get signed and tour the world but until then, Lockjaw will keep doing what it always has…melting faces! [Smiles]

Thanks for answering my questions and for introducing me to your music. I’m interested in hearing everything, and I hope that the readers of this interview will also. The Hell Rock that you guys create is definitely something that more people should know about.