In 1982, Louichi Mayorga was 18 years old and a recent high school graduate. While standing in line next to each other at Santa Monica College, Mayorga got to speaking with Mike Muir, a guy whom Louichi had casually known since the ninth grade. Muir was in need of a better bass player for his band, Suicidal Tendencies, and Mayorga was in need of a new band as he was unhappy with the guys was playing with at the time.

“I heard he was in the band Suicidal Tendencies and I had seen their spray paint on the walls. We started talking and we really got into a deep discussion right then and there. We were both into what we were getting at,” Mayorga told New Noise Magazine in a recent telephone interview. “I went down later that afternoon to try out for the band at Mike Dunnigan’s house. They showed me the songs and I was in. It was that easy.” 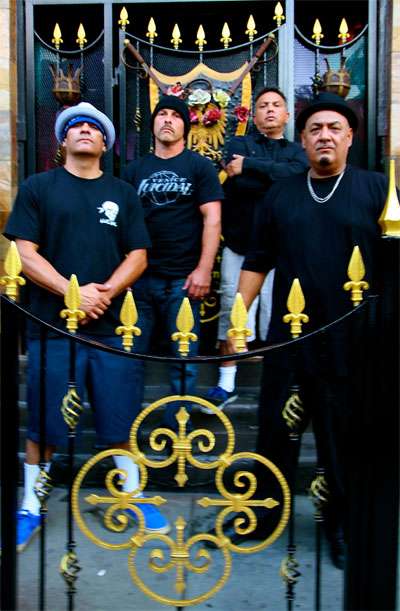 On the story behind the popular song, “Institutionalized,” Mayorga said, “I wrote the music and Mike wrote the words. It was a story a kid was telling Mike about what happened to him. He wanted a Pepsi from his mom and his mom was tripping on him and he told Mike. Mike just grabbed it and went with it with my music.”

The 1987 release of Join the Army would be Mayorga’s last recording with Suicidal Tendencies, as he was fired by Muir because the band was looking for a better bass player. The news was a crushing blow to Mayorga. He played around briefly with a few more bands after his departure from Suicidal Tendencies, but ultimately ended up putting his bass away. “I had no interest in playing. I was hurt and devastated, to be honest with you. If people were playing my music, I wouldn’t want to hear it and I would just leave.”

It would be a long time before Louichi Mayorga would play the bass guitar again. With another baby on the way and at the age of 49, Mayorga landed a gig doing stage work for Fishbone through friends of his in the music industry. At the first show of the tour, Fishbone played “Institutionalized.” Mayorga was blown away that people in the crowd were still into that song. After the Fishbone tour, Mayorga saw Suicidal Tendencies play at the Musink Festival in Orange County, California. Again, Mayorga was excited to see that so many people in the crowd were into Suicidal Tendencies.

Seeing how the fans reacted to the Suicidal stuff sparked Louichi Mayarga’s interest in getting back into music. Together with his former Suicidal Tendencies bandmate RJ Herrera on drums, Mayorga formed a new band called Luicidal. Mando Ochoa and Marty Ramirez rounded out the band on vocals and guitar, respectively.

“I keep kicking myself in the ass because I should have done this shit ten years ago,” Mayorga said. With a sound that harkens back to the early Suicidal Tendencies days, Louichi Mayorga is noticeably excited to finally see the release of the first Luicidal record this fall.

Luicidal is set to be released on October 14 via DC-Jam Records. “Slowly, but surely doors have been opening. We’ll see how far this ride takes us,” Mayorga says, “I ain’t going nowhere this time.” Mayorga described getting back into playing punk and metal music as, “refreshing. I’ve got so much shit in the head right now. It’s awesome.”