You guys just got off a really long tour in Europe. How was it playing with the Gimmes every night?

Katie: It was incredible. The thing is, the Gimmes bring a few different sets of matching shirts with them, so you never get sick of any of their outfits. My favorites were the pink Hawaiian shirts. I think the pink really looked the best on everybody.

You got a few weeks off before embarking on this tour. This one is covering the South before winding up at Punk Rock Bowling. What are you looking forward to on this run?

Katie: We’re in the thick of our Southern tour at the moment, and speaking of pink, we’re in the Color Stretch. Last night we played the Blue Light, tonight is the Limelight, and tomorrow is Red 7. I think all together that makes some kind of shade of brown, which Annie would be quick to tell you is my favorite color. Other things I’m looking forward to on this tour are our day off in New Orleans for Cinco de Mayo, playing with Chip Hanna again in Flagstaff, and of course, playing a hometown show in LA.

Punk Rock Bowling this year- you’ll be playing, but not at the pool parties. Tell us about how you’re planning on spending your PRB this year.

Katie: NOT getting sunburned and NOT eating pot cookies. Any other activities are fair game. 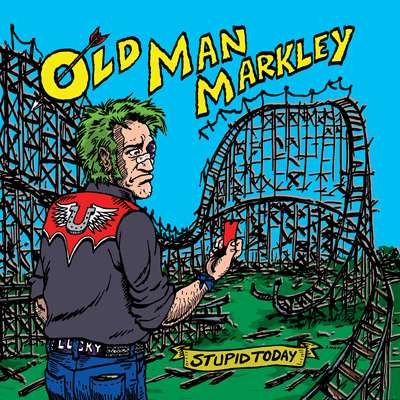 Katie: We wanted to do a stew of some kind because of the name of the song on the 7″ (Stupid Today), so Annie and I looked online and got inspiration from a few recipes to create ours. We customized our version to include things we had on hand or could get locally. Her dad’s garden was overflowing with fresh chard and mint, so we poached tons of both from him. Annie’s lemon tree this year was especially generous, so we used a bunch of lemons from her yard. The recipe is indeed vegan, we’ve made it twice already, and no one is even sick of it yet. Though no one has eaten it before getting onto a roller coaster.

The new 7″ features art by the legendary Chris Shary. How did you get him on board for it?

Joey: Johnny met Chris at a show we played at Gilman St. earlier this year. Being huge fans of his artwork, namely his iconic Descendents album covers, we thought it would be rad to have his art mixed with our music.

The lyrics of “Stupid Today” are reflected really well in the cover art. Did you give him an idea or just let him hear the song and do his thing?

Joey: Johnny had the concept and pitched Chris the idea. The rest is future history.

The 7″ features a new original song that’s about the ups and downs of love. A lot of your songs express ups and downs, and downs and ups. Care to elaborate on the recurring analogy?

Joey: That’s pretty insightful! Maybe we’re really into gravity or something. “Stupid Today” to me is a song about choices, making decisions that affect the future. The idea that doing a dumb thing today will make tomorrow harder. Todd Fenton (OMM songwriter) and I tend to write with the intentional hope that the listener will interpret the song however they choose. But it could be about gravity.

The “Reeko” cover flips the original kind of inside out, and gives a little extra love to Punk In Drublic. Can you tell us how that all came together?

Joey: In the continuing tradition of B-side punk cover tunes for our 7″ singles, Johnny and I attempted a few rough demos of Toy Dolls and Swingin Utters’ covers that should never be heard by people who can hear. The “Reeko” demo was better. We did the slow part fast and the fast part slow, snuck in a little “Perfect Government” voice over, and borrowed a drum part from “Herojuana.” OMM fun fact: When Fat Mike lost his voice (in an Atlanta strip bar), I got to sing “Reeko” at a Knoxville, TN show. Then he choked me off stage for singing the “Lori Meyers” girl part. That was the second time Mike has choked me off stage, the first being another story altogether….

What’s next for you guys and gals post-PRB? Canada, I see?

Joey: We’ve got a US/Canada run in early summer. We unfortunately had to cancel our late summer European run, and will probably sped the rest of the summer writing songs about gravity.

Pick up a copy of Stupid Today here: www.fatwreck.com/band/index/99

Be sure to pick up a FREE copy of New Noise Magazine issue #9 with Me First & The Gimme Gimmes on the cover at Punk Rock Bowling! 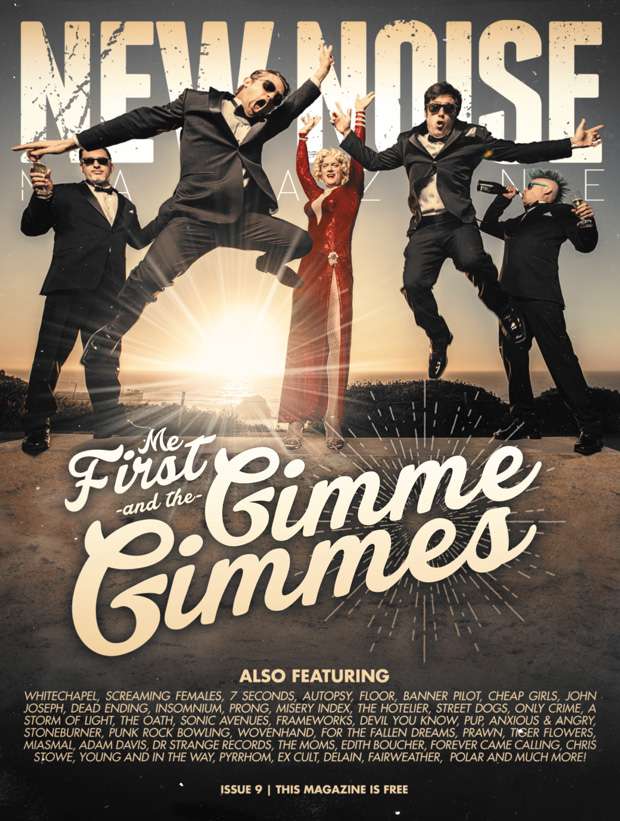