Interview: Matt Woods Talks About His New Album ‘With Love From Brushy Mountain’

Matt Woods’ With Love From Brushy Mountain is so earnest and real that it could almost single handedly revive someone’s waning love of country music. “Ain’t No Living” from the record claims Woods is “lost in a dream, drunk as George Jones.” The songs hold a mirror up to weather beaten travellers and troubadours, small town heroes and the broken hearted. “West Texas Wind” claims a man on a record is a sunofabitch for getting rambling into Woods’ blood. There are tons of great elements, from fiddle and country guitar to gritty yet warm vocals that sound like Woods is holed up somewhere nursing off a bad spell. Heck, there’s even a tribute song to Lucero – “Lucero Song.” Outlaw country fans need to check this record out. It is honest and soulful. This is what it’s all about. I dare you to listen to “Deadman’s Blues” and not miss an old flame.

What are you currently up to?

In the middle of a huge tour. This weekend we’re in Chicago for the Moonrunners Festival.

What did you want to accomplish with With Love From Brushy Mountain? 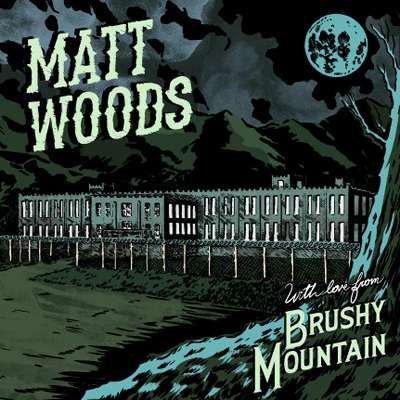 I’m really proud of Brushy Mountain. We went into the studio planning to make a streamlined album and I think we hit the mark.

There’s a great storytelling element in songs like “Snack Bar Mary & The Ten Pin Priest.” What appeals to you about that kind of writing?

I think sometimes telling a story seems like the best way to capture an idea. You’re able to hit on certain notes and common themes that will hopefully resonate with folks. “Snack Bar Mary,” for example, deals with how a small town can change, and I think that’s something people can relate to, not only in the South, but across the country.

Who plays the great juke joint piano on some of the songs? Did you employ some hired gunslingers? Also, who is the great lady vocalist harmonizing with you?

As for the musicians on the record, I’ve been fortunate enough to have some of my very talented friends contribute to the recording. The keys are played by Ben Maney. Sarrenna McNulty sang backup vocals on much of the album. They’re both friends of mine from Knoxville.

Do you embrace the “Outlaw Country” label? Your sound is timeless, unlike sappy pop country that is just used to sell NASCAR tickets.

I’m not the biggest fan of categorizing music into one box or another, but it’s disappointing to think that, if you tell people you play country music these days, they’re more apt to think of Lady Antebellum than Waylon Jennings.

What kind of essence do you try to imbue in your lyrics?

I don’t know. I guess I just try to find the best way to convey a thought.

How was it making the video for “Deadman’s Blues”?

Making the video was a blast. We shot over the course of three days and it was the first time I’ve ever been part of a production that involved. Hoping to do more videos soon.

There are some good hangovers on this album. Is that restlessness borne of the country lifestyle?

Not necessarily. Heading down the wrong road isn’t exclusive to country music.

Brushy Mountain was a state penitentiary not far from where I grew up.

What is the track “Tiny Anchors” about? “Little words spring from your lips without fail” is such a good lyric.

“Tiny Anchors” is essentially about how people can tether themselves to a situation or idea, sometimes to their own detriment or the detriment of others.

Are there people or memories from shows that make touring worth it?

Being on the road is great in that it’s often like a family reunion each night. I’ve been lucky enough to get to know some great people all over the country. That’s a huge part of what makes staying on the road enjoyable for me.

Your website is “The Real Matt Woods.” Is there a fake Matt Woods out there?

Yes. As it turns out, there are several Matt Woods playing music in the world. As a matter of fact, I just played a show with one in Des Moines!