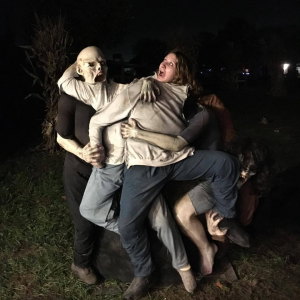 German newcomers Meanbirds dropped their debut album, Confessions Of An Unrest Drama Queen, last summer. Champagne for the Poor, the band’s latest EP, is dropping on August 6. The EP consists of four tracks the band chose to hold onto and not release on Confessions once it became clear the pandemic was not ending anytime soon. These specific tracks were actually written by frontperson and founding member, Magenta Caulfield, before Meanbirds formed.

Meanbirds worked with a new team of collaborators who brought in a fresh perspective on how to approach each song. The tracks were produced by Phil Fleischmann (who also added a second guitar), mixed by Fritz Brückner at Haunted Haus Studios Leipzig, and finally mastered by Carl Fritz out of Chicago.

Due to the band’s street and oi! punk sound, it was surprising to learn that The Killers were a main inspiration for Caulfield in writing these songs. According to Caulfied, “Joy Ride” by The Killers inspired a whole new way of approaching songwriting.

“I had played bass in other bands before, but that was the first time I really started writing songs on bass,” Caulfield says.

The bass-forward sound is especially apparent in the EP’s title track, “Champagne for the Poor.”

Meanbirds have a direct and clear agenda. Their ideal listener is the young punk in all of our hearts, “looking for a revolution” (Against Me! – Teenage Anarchist).

“Homophobic, racist, and ignorant people won’t have much fun with our band,” Caulfield says.

While “Champagne for the Poor” is a clear protest song, the track “Tal Vez” cuts a little deeper for Caulfield. The song tells the story of a friend who lost their battle with cancer, leaving behind her young daughter and spouse.

“It makes me extremely sad every time I sing the lyrics,” Caulfield says.

So, what’s next? Meanbirds will be touring Europe with Adolescents in 2022, and hopefully waving goodbye to the pandemic. After that? Meanbirds are looking forward to hitting the festival scene in the U.S., and we are stoked to have them.