Interview: The Menzingers talk about the pressures of the new album

Interview with co-vocalist and guitarist Tom May | By Damian Burford

The Menzingers had an uphill battle ahead of them while crafting the follow up to 2012’s wildly successful On the Impossible Past. However, the band has turned in their most adult album to date, Rented World, coming a long way from their ska/punk origins. Instead of feeling like a forced sequel, the new record treats listeners to a natural continuation of the band’s past themes.

We sit down and chat with Menzingers co-vocalist/guitarist Tom May about the pressures of the new record, taking the band to the next level, and inspiring the next generation of musicians.

On the Impossible Past landed near the top of many top 10 lists of 2012. How the hell do you even begin to follow up?

[Laughs] That’s a good question. What we did to follow it up was pretty much the same thing we did last time, except what we think is better. We spent a little more time on the songs. We got better at our instruments. We wrote about what we know, again. All we can really do is put it out there and see if people like it. We really like it, and that is most of the battle right there.

What kind of mindset did you find yourself in while recording this new record?

Part of it is, we need to do just as good of a job, if not a better job than we did last time. We try not to let that be overwhelming. When we went into it, we really wanted to take the things that we didn’t do as much of on the last record – which was experiment stylistically and play with tones – and this time we did exactly what we want to do. We added a bunch of new stuff, too. We did it in Philly and it was new and exciting doing it with someone we knew, but had not worked with previously. It was equal parts nerve wracking and exciting.

Why did you choose to stay in Philly this time around vs. Chicago with Matt Allison at Atlas Studios?

We wanted to be home. We didn’t want to go out and sequester ourselves again. We wanted to stay home and carry on with our lives. We also wanted to be a more active part of the scene in Philadelphia. We wanted the record to have more of a sound that reflected us living here, spending our lives here, and growing here. Matt Allison is one of our dear, dear friends. He’s a fantastic producer. We wanted to try something different. He’s an amazing human being and incredible at what he does.

What is the pressure of the studio like? Do you guys just shake it off and make things happen?

We definitely shake it off and make it happen. Anybody who says they do that and don’t have any inklings of pressure is either a stronger person that I, or lying. [Laughs] There is definitely a part of your mind, say 15%, thinking that these people like these songs and if we put out a record and people don’t like it… That could be devastating. Worrying is like praying for something bad to happen. Why do that? Why not be excited!

Were there other bands whose back catalog you looked toward for guidance?

I love the video for “In Remission,” and it reminded me a lot of the early Weezer videos for “Undone,” and “Say It Ain’t So.”

That’s really cool that you say that. That is one of the influences we drew from for the video. The dilemma for a band making a video, and especially for a band like ours, we want to have fun making a video. We want it to be cool and we don’t want to look like a bunch of assholes. The director Rob Soucy, who’s a really cool dude, that’s basically what he said when we first talked to him on the phone. He said, “I get it. I played in bands. I promise I won’t make you guys look like assholes.” Shooting the video, that was an experience that we had never had before on that scale. We rented a sound stage. We tried to have as much fun as we could with it. It was pretty awesome. It definitely came out that way. One of the influences we talked about was, “All right, what is a band that is playing cool in a video and looks like they are having fun and a good time?” It was definitely Weezer.

On the last record, the chorus of “Obituaries” is, “I will fuck this up, I fucking know it,” about the band’s transition to Epitaph Records. Are you still worried about fucking things up?

That’s always something you worry about. Every time that you are really hungover, or have exceptional amounts of anxiety in a day, you always think, “Hey! What am I doing with my life? Should I have gone on a different career path? Should I have been an engineer or something?” Who knows. Those are just thoughts that I think are healthy for a person to have to keep you grounded and keep you moving forward. There is also that idea that you get wrapped up in your own bullshit sometimes. We still do that, but it’s definitely not any kind of pervasive mindset or overwhelming thing. Sitting around and worrying is not going to get you anywhere. It’s very counterproductive.

I’ve got a feeling that this next record is going to take you to that ever-elusive “next level.” You guys are going to explode. Are you ready?

Thanks man. I really hope so. We’ve been touring with bands that are bigger than us for a long time. We learn from some of the best. I can call people like Kate Hiltz [from Chunksaah Records] and The Bouncing Souls and ask them questions about this life that I don’t have the answers to. They are always very helpful and give really good guidance. None of them tell us what to do. They just try to help us through. That’s how we are preparing ourselves: looking at other people and how they did it, what they did right and what they did wrong. We’re trying to do those things that were right and not do those things that were wrong. So far, in the experience of this band, we’ve never been able to prepare ourselves for the experience of any of it. We’re just going to wing it like we always have.

You guys have done so much in such a short amount of time. What have you gotten to do that blows your mind the most?

I think what blows my mind the most is the all-encompassing aspect of everything we’re doing. Ever since I was 16, this is what I wanted to do. I didn’t really think about anything else. Yeah, I wanted to play in a band, I wanted to play shows, I wanted people to like our music and feel good about themselves when they listen to us, and that’s the most mind blowing thing. For specifics, we could go to Germany and play a show packed full of people and English isn’t their first fucking language! Not that we have very complicated lyrics and themes for somebody who is a non-English speaker, but the idea of somebody who doesn’t even speak English coming to your show and being moved by it is pretty fucking mind blowing if you ask me.

There are kids out there picking up instruments and starting bands after seeing The Menzingers play. How does it feel to inspire the next generation?

It’s an incredible feeling. It’s an AMAZING FEELING! Every once in a while, people will send us a Youtube video that they found of a kid or a younger band covering one of our songs. Or somebody will say, “This band opening up for us played one of your songs.” That’s amazing. That’s exactly what we were doing when we started making music. The reason that I wanted to play music was – it’s funny, one of those quintessential moments – the singer of the Suicide Machines [Jay Navarro], when I saw The Suicide Machines at the Trocadero in Philly when I was 15, said to us: “Any of you guys can do this. You can do what we are doing. You don’t have to do what everyone else wants you to do. You can pick up an instrument and play it.” While that is somewhat terrible life advice, for me, it was pretty great. It’s really, really fulfilling and really helps you make the notches of your personal growth to realize that you are inspiring people and making them happy and fulfilled. It’s a very positive thing. It’s incredible. 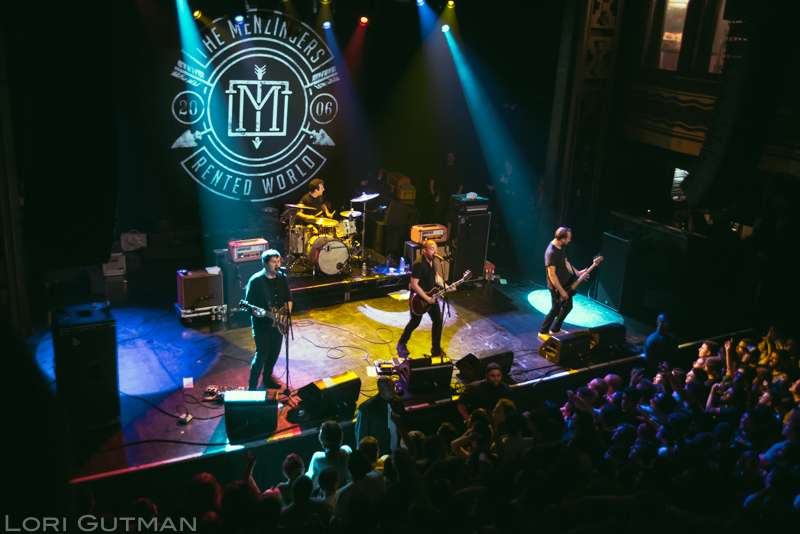