Interview: Mercenary’s René Pedersen on being a social worker and ‘Through Our Darkest Days’

Interview with René Pedersen | By Eric May

Mercenary is back, with yet another great album to add to their strong repertoire of releases. I spoke with René about what the disc means to the band, and what his personal favorite standout on the new album is. We also talked a bit about the lyrics, the artwork and even his other job as a social worker and how important the youth of this generation are. Furthermore, how important the time with your children is may not be a very metal thing to say, but it certainly rang loud in my ears. There’s even a little bit about early Metallica with Dave Mustaine here to be unearthed! 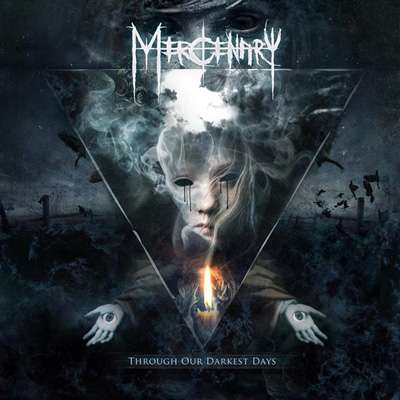 The new album is called Through Our Darkest Days. How did you decide on this title? Do you think that we as human beings are going through our darkest days right now?

The title is very much related to personal experience, going through some tough times not only as individuals but also as a band. We now feel that we have been through the worst and that we have a brighter future ahead of us. The lyrics also deal with some of these obstacles, while also having the strength to focus on the positive, when everything is drowning in negativity.

Where did you record the album and how long did it take? What were some of the toughest parts on the album to record?

We recorded it in Jacob Hansen Studios in Ribe, Denmark, where we have recorded all of the other albums. Jacob is a very talented producer and he has evolved a lot over the years, along with us as a band. Making the album was a very intense process, with long days in the studio and for me personally, the hardest part was the very long vocal sessions. I enjoy being in the studio, but there’s no doubt that it takes its toll on the body. The recordings took just about a month to finish.

Are you pleased with the finished product? Is there anything that you would go back and do if you had more time? If so, what is it?

I am very happy with the finished product. I really feel that we have made a solid album, implementing a lot of the elements from our older albums, but also bringing forward the new sound and vision for the band. We have a much more focused sound now and this album is, for me, an album that I am very proud of and that I feel marks a whole new era for the band. The future looks very bright!

What do you think stands out the most to you on the disc? For me, the barrage of melodies and powerful vocals stand at the forefront. It’s definitely one of your most melodic albums since 11 Dreams.

For me, it is the mix of aggression and melody that blends together and feels natural. We have always focused a lot on making the songs dynamic, but also making every song a journey through several musical expressions and implementing all the different vocal styles and so on. This album unifies the sound of the older albums with the new, and takes it to a whole new level.

Tell me about “Dreamstate Machine.” This song seems like it has a great deal to do with religion as a world problem. Could you explain it further?

Actually the song is about all kinds of illusions that we build up as human beings, not so much religious beliefs. People tend to draw their own conclusions about things and don’t really stop and question them. We get so caught up in our own delusions, that we completely lose all sense of reality. The world is full of fanatics that live in this shell without any clue of what goes on in the “real” world.

“A Moment Of Clarity” also struck me as interesting. It’s essentially a song about going out and exploring the world. A worthy topic, considering that most of us are glued to our computer screens and cell phones these days. Even movie stars are too busy texting on their own phones to even relish the fact that they’re shooting a film. Do you think we take our lives for granted?

I feel that we spend too much time focused on all the tasks at hand and getting stressed out of our minds, instead of taking the time to just enjoy life and enjoy time with the people that mean the most to us. So many parents pick their kids up at five o’clock from daycare/kindergarten etc. and then make them some food and put them to bed. They never get to spend any time with them and totally miss out on all the great moments that you should have with your children. Being a father, I have come to value my time a lot more than before. I used to work a lot and spend a lot of time away from home, but I have come to realize that the most important thing for me is to enjoy my friends and family and not get so caught up in all the material bullshit.

There’s also an odd bipolarity on the album, between the opener “A New Dawn” and “Generation Hate.” On one side, it seems that you’re saying that we can pull through to a new dawn, but on the other side it sounds like this generation might destroy itself before we could ever wake up to a new beginning. Could you talk a little bit about this?

The thematic is very different between those songs, “Generation Hate” is written through the eyes of a teenager, living life as if his/her choices have no consequence. I work with young people here in Denmark as a social worker, and every day I stand face to face with young people who refuse to own up to their responsibilities and blame all their failures on other people. They can’t see how they are wasting their potential, and they can’t see that a lot of the choices they make now have HUGE consequences for their future lives. “A New Dawn” is about overcoming the obstacles, not matter how big they are! And to keep on fighting for the things you love, even when everyone else thinks that it is hopeless.

The album cover for the album is quite interesting. It depicts an inverse triangle, a bleeding masquerade mask accompanied by a candle and smoke, as well as a figure with eyes in its hands. One can’t help but feel that there’s a bigger message on the cover. What are you trying to depict here?

The artwork came to life, through the artists’ vision and interpretation of the lyrics and title of the album. Mircea sent us the first draft and we immediately saw the connection. You can find a lot of messages in the artwork that can be connected to the lyrics, and I feel that it portrays well the melancholic and darker side of the music.

You guys were one of the first to play melodic death metal, and years later you’re still going strong. How do you feel that the genre has changed in recent years? Did you feel that you needed to add some new things to the music in order to stay current?

Through all the trends that have come and gone through the years, Melodic Death Metal has had its up’s and downs. I would not describe us as a typical “MDM” band; we mix in so many elements that our music crosses through a lot of genres. What has always been important for us is to write songs that take the listener on a journey, a journey through a lot of different emotions and captures the listener from the beginning to the end.

What bands could be seen as influences to Mercenary, both in the formative years and today?

We draw inspiration from so many bands, all across the different spectrums of metal and rock. We try to make the music as dynamic and wide as possible by mixing in these different elements. We are inspired by bands like In Flames, Soilwork, Pantera, Machine Head, Behemoth, Dimmu Borgir, Van Halen, Megadeth, Metallica and so on. The inspiration is very wide and nothing is “off limits” in Mercenary, as long as it brings something positive into the songs and the music in general.

What are some songs that I would find on your music playlists right now? Is there anything that would surprise me?

I actually am a sucker for a Danish singer/songwriter duo called Noah. They make very soothing and calm songs with melancholic lyrics that I can connect to. I have always enjoyed well written music across all genres; although METAL is my number one choice when it comes to writing and performing music myself.

Martin and Jacob use Marshall and Bogner amps; I feel that they make up a huge part of the guitar sound that we have. Martin plays Ibanez guitars and I play ESP basses. Ibanez has been the brand that has been used the most in Mercenary, when we talk guitars. So they have a big part in our sound and history. I have changed a bit between some different brands in basses and amps over the years. But since 2009 I have been using Mark bass amps and ESP basses.

What do you and the other guys in Mercenary do in your spare time?

When not on the road playing music, we all have day jobs in Denmark. I work as a social worker taking care of kids in the age 15-23, Jakob translates TV-shows and movies, Martin manages one of the biggest game warehouses in Denmark, and Peter is a music teacher. Besides that, we all have girlfriends and Peter and I both have kids. Music for us is a passion that we all enjoy making together and it takes up most of our time besides all the other stuff.

Obviously, you’ve toured with some of the biggest and brightest acts in the scene. What would you consider to be your most memorable show or tour thus far? What can the fans expect on this outing? Also, what are some interesting tour stories or road antics that you could share with us?

The biggest experience for me was to tour with Megadeth back in 2008. I have been a Megadeth fan since 1992 and I love their music, so to share the stage with them as main support was beyond amazing. Dave was such a nice guy and took the time to talk to us. He told us some funny stories from when they started out playing with Metallica. One of the stories was about a tour they did, where they drove in a van that only had lights on when one of the crew members connected the cords in the bottom of the car. So when they drove at night, they would have one of the crew members connect the cords whenever they encountered any oncoming traffic! He also told us that they practically couldn’t rent a car anywhere, even though they had the money because they looked like they did and played that kind of music.

Thanks for making another great album guys. It was well worth the wait!

Thank you, and thank you for the interview! And to all of you reading out there, thanks for stopping by!

a
PrevAnacondas Get The ‘Sub Contra Blues’
Interview with Eddie Kim of Billboard Death Metal, DeadfallNext