In beautiful San Luis Obispo in Central California, The Mighty Fine have released their full- length debut on Creator Destructor Records. Singer Brook Thompson, an experienced sommelier and no stranger to the road less traveled, takes the time to answer a few fun questions…

After hearing “Snake Skin” the first single from your new record Brothers and Smugglers I hear a stronger and more confident sound than on any other of your previous records. How has this new sound developed and where does this record pick up from? 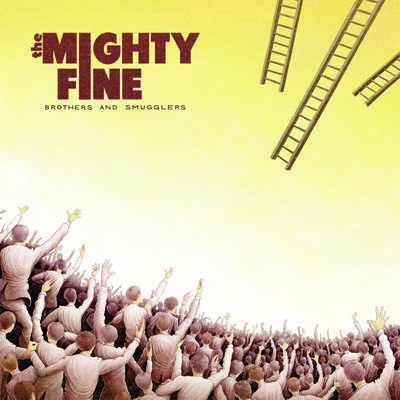 I think “Snake Skin” is a great representation of Brothers and Smugglers. It’s a much more focused effort than any we’ve done in the past. Some bands define their sound/style early on while it takes others years of writing to achieve a sound they can manifest. In the past, we pulled from various influences and wrote a variety of songs that could differ drastically from one song to the next. It can be hard to establish yourself as a band when you write in such a fashion. Over the last couple of years, we solidified a tight line-up and collectively came together to write what felt like a strong and focused album.

I also need to give credit to producer Kyle Black. We worked with Kyle back in 2012 when we did a split 7″ with The Shell Corporation. Through that experience, we knew he’d be our first choice the next time we did a full- length. His approach to producing and recording really pushed us to work outside of our comfort zone and own our songs. Before Kyle, we didn’t have too much experience working with a producer. I think the care he puts into each song from pre- to post- production really comes through in all of his releases. You know you’re going to get a quality experience and product when the guy is working on the new Comeback Kid, Strung Out, and New Found Glory the same year he recorded with you.

Making the move into the Creator Destructor family seems like a perfect fit. How long have you known Ben and how did you guys get together and decide to put a record out together?

It’s definitely an honor to have Creator-Destructor release Brothers & Smugglers. I’ve known Ben for a few years now. We met at Boo Boo Records in San Luis Obispo when Heartsounds did an acoustic set before they played with Alkaline Trio later that night. After they played, we chatted for a bit and discovered that our old bands had played together years before. We kept in contact after that, doing various shows with Heartsounds. I believe it was after our 7″ split with The Shell Corporation that Ben suggested we do a full- length next. At the time we hadn’t thought about doing that just yet but Ben offered to put it out on his label. The answer we gave him was “duh!” We’re fans of many of his releases so it was exciting knowing we’d be label mates with Heartsounds, Cleave, and The Stereo State.

Shows with Heartsounds highlight the close bond you guys have formed with label.

Yeah, we did a slew of California dates in March and April. We start with some shows with The Ataris (So Long, Astoria lineup)/Versus The World, followed by shows with Heartsounds, Success!, and Civil War Rust. After a couple months in the studio last year, our band had a lot of weddings/engagements take place so we didn’t tour all that much. So we’re jonesin’ to hit the road and see all our friends. Between all our busy work/school schedules, we don’t have the luxury of doing an extensive touring in the near future, but we do plan on covering as much of the Western US as we possibly can this year.

Going strong inside the Central Coast community over six years now what has changed? What is the punk scene like in SLO? I know you guys are talking about doing gigs at a new SLO DIY venue for upcoming shows.

All in all, the Central Coast punk scene is much like many scenes throughout the country. It has become comatose and at times non-existent. San Luis Obispo, being the college town that it is, provides an abundance of indie, folk, reggae, and dub step. Punk rock seems to be aging here, not a lot of young new bands in the area. Unless Pennywise or NOFX comes to town, you don’t see many packed punk shows. This could also be attributed to the lack of all-age venues in SLO County. Some friends tell me there’s a cool new DIY warehouse in SLO that’s starting to become popular. They operate like a co-op and host a wide range of underground music. It’s our hope to start doing local shows there this year. It’s refreshing to know that there are hard working kids trying to grow the scene. I’m excited to see where this leads.

Being a weekday wino myself I must ask, how are the grapes in SLO and how is the weather holding up?

The new growing season started up in late March/early April. California overall has had a rather warm, dry weather this past winter. Sure, it’s great to go tan at the beach in the middle of January, but the agriculture industry is hurting big time due to this drought. The 2014 wine grape harvest will be a sad one if we don’t see some more rain in the near future.

What is the big vintage you are looking forward to this year?

I’m really excited for the 2013 vintage that’s in barrel right now. They will all be bottled through the year. For those of you who don’t know, I’m the Wine Club/Shipping Manager at a great small, family owned winery called Claiborne & Churchill. We specialize in Pinot Noir, Dry Riesling, and Dry Gewurztraminer. We have a killer new 2012 Syrah that just came out. It’s got a really nice balance of dark fruit and pepper. Also, we’ll be releasing a super-limited bottling of Malbec later this year, which I’m stoked for. I think you’ll dig it, especially if you’re into lamb, ribeye, and/or grilled veggies. Next time you’re passing through San Luis Obispo, drop me a line and I’ll take you through a tasting.

Pairing seems to be essential for most connoisseurs, what are some perfect matches when it comes to punk rock albums and wine?

This is beautiful question. Here’s a little guide that you can use as reference:

We all wish you nothing but luck with the new album; where can we find the latest on The Mighty Fine and what’s next?

Thank you! This was a pleasure. Keep up with The Mighty Fine, Brothers and Smugglers, and future wine/album pairings at these sites: