Interview with vocalist and guitarist Blaine Cartwright  |  By Jonesy

We have to talk about the new album Up The Dosage. Five years of waiting has finally come to an end. What was it like returning to the studio for a full-length? 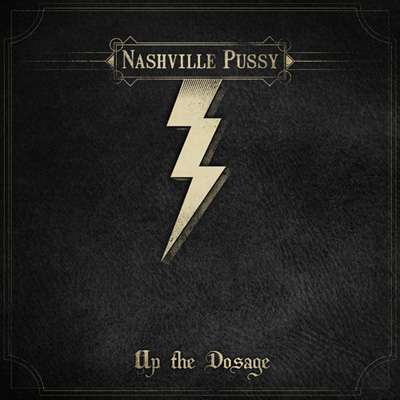 Me and Ruyter [Suys] were in the studio a lot, we just didn’t do any Nashville Pussy stuff. We did a Nine Pound Hammer record, Country Classics, and I also did a gospel record with my other band Kentucky Bridge Burners called Hail Jesus. We were also doing some Southern rock stuff here at the studio in Kentucky. We just didn’t feel like doing any Nashville Pussy stuff at the time. Then we got our fill of that and went back to record the new album.

I had the chance to catch a show with you guys and The Supersuckers in Malmoe, Sweden, in 2009 and now their frontman Eddie Spaghetti is involved with the new album. How did that come about?

I like having someone from the outside to help us out with songs. We write a lot of riffs, which turn into good jams, but these ideas do not necessarily transform into good songs. Eddie is good at that. He is also really disciplined in the studio. He co-wrote a few songs and helped arrange most of the tunes. He has also played bass with us for two tours and knows us really well.

So tell me about the current line-up of Nashville Pussy? How did you meet Bonnie Buitrago (who is replacing Karen Cuda on bass)?

Bonnie has been with us for a couple of tours now, she was with us when we played with ZZ Top, and she has been with us for two tours in Europe. We were still trying to see if Karen could make it or not and we also had Eddie Spaghetti from The Supersuckers for a while. This is the first time she has ever recorded with us and she really did a great job in the studio.

What was the tour with ZZ Top like? It must have been a great chance for you to meet a new audience.

It was great. I went to the bus, changed clothes, went back, and then stood by the side of the stage and watched ZZ Top. I mean, that’s perfect. In Europe, they have a hipper rock ‘n’ roll crowd, but in America, their crowd is much older. They still loved us here, so I was kind of shocked. On this tour, we often played in theaters in front of a seated audience. We have never done that before. We even got standing ovations. The only thing is we couldn’t cuss and swear, so we couldn’t do half of our songs.

You have a Waylon Jennings sticker on your Firebird guitar. Your live sets often include “Nutbush City Limits” and “Milk Cow Blues” by Kokomo Arnold. Listening to the new album, I hear hints of Motörhead and Black Sabbath. What are your influences?

I usually try to write stuff that sounds crazy or funny, that gets people’s attention. I like the titles to be entertaining, also. I like titles that will make people curious about the record.

Take me back to ‘96. When did you decide to form the band? How did you meet Ruyter?

Ruyter was a fan of my band Nine Pound Hammer. She was such a good guitar player and I tried to find a way to put her in a band. We got together with the drummer of Nine Pound Hammer at the time, Adam Neal, to get a rock ’n’ roll band together. Ruyter had never been in a band before, but as soon as we got together, she loved it. I also met Corey Parks at a Nine Pound Hammer gig. She played bass and had a certain cool look about her. So everything kind of happened.

How did you get into music? When did you decide to pick up a guitar?

My aunt and my uncle had a record store in Kentucky. We didn’t have any musical background in the family; we just liked music a lot. So I was more into records than I was into guitars. I was more into collecting records and talking about records than guitars. And I still kind of am. I was 18 years old before I got a guitar.

I know your band name comes from the intro of Ted Nugent’s “Wang Dang Sweet Poontang,” but how did you decide on Nashville Pussy?

I was living in Nashville at the time and I think it sounded cool. It helped out in Europe I think, but in the U.S. we have had some problems. People in America don’t want any problems. It is kind of frustrating. Sometimes they don’t put our name on posters, tickets, or on the marquees. Plus we almost don’t get any big festivals booked here in the States and the name certainly doesn’t help there.

What would you have become if not a musician? Did you ever have a Plan B?

No, I actually never had a Plan B. We have been touring a lot and I am happy everything is working out for me. We are still on a big label in Europe and I really like that. Me and Ruyter also have our own label called Slinging Pig Records, and our own radio station, Slinging Pig Radio. It is so much easier to get stuff out by yourself these days, I am pretty happy with how it is evolving. It is much easier to get stuff out on iTunes than it was getting stuff out in a record store. I am pretty happy about how it is rolling. You just still have to figure out a way to stand out, get people’s attention. And if you do, the rewards are great. The money comes to you instead of the record company. I still like being on a bigger label if I can though, it helps out when it comes to promotion and stuff like that.