Interview: Nothing’s New Album Was Made Through Misery

Interview with Nicky Palermo and Brandon Setta  |  By Dylan Burton

Can you tell me about what prompted you to form Nothing? Were there any particular experiences, emotions, or aspects of your life at the time that led to the genesis of the band, or did it just come about naturally?

N – The past decade has been trying for sure. What better to do with tragedy upon tragedy than to draw some sort of inspiration from it that you can take and build something with? Nothing was originally built from life finally getting the best of me. On a final downhill spill to a full on breakdown, I wrote some songs with no intention of release, then in a cocaine induced conversation fest I played them for some people. Those same people convinced me to record them again with a full band. I did so and it was received well. I met Brandon in a familiar ditch. He enjoyed the songs and wanted to build. He brought a new misery to the things I had to offer. It was a match made in the heavens.

I’ve heard from multiple sources that you are a fan of Russian authors such as Dostoevsky and Gogol. Is there a connection between Nothing’s music and the bleak, realist and sometimes desperate nature of Russian literature?

N – Fyodor and the other Russians really helped me see my way through my first year of incarceration. The second year brought a mixture of Genet, Baudelaire, and Bataille and they not only saw me through my second, they began to shape my thoughts of what it means to be here. Brautigan, Burroughs, Ginsberg, always shining light on ugly surfaces somehow transforming them into beauty. It astonished me. I always wanted to do the same with music.

How has the Philadelphia music scene impacted Nothing’s career? In what ways has it helped or hindered your success? Do you feel an affinity with the scene in Philly?

N – It’s hard to do anything enjoyable anywhere. People just ruin everything everywhere always. Philadelphia is the same as everywhere else. 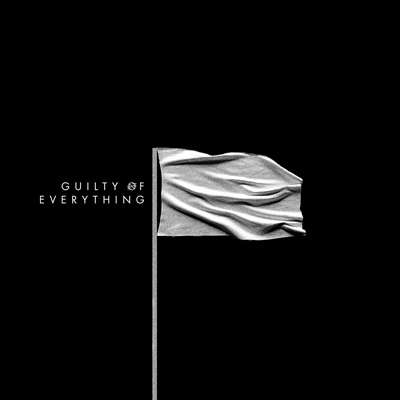 What did you guys set out to accomplish with Guilty of Everything in terms of musical direction or getting your message across, and do you feel like you succeeded?

N – I often struggle with why I even get out of bed everyday so I literally have no idea why I seemingly needed to create this. It’s alarming.

B – We wanted to write a heavy and beautiful record. I don’t know if we did or not.

Tell me about the process of writing the songs on the album. What generally had to happen in order for the songs to take shape?

B – They mostly started with one or two parts and we built on them, we had generally the same ideas but there are always creative differences. We got really fucked up around that time because Nicky and I were both pretty unbearably miserable for our own reasons. That helped with the writing process.

Why did you decide to have Jeff Ziegler record and produce Guilty of Everything? What was it like working with him?

B – We all drank and did drugs the whole time. From like 8 am to midnight. Then we’d usually go to the bar down the road together. How we managed to make a record is a mystery. He’s a talented guy with similar interests to us.

Nothing has been noted for having more of a punk sound than most bands that fall under the “shoegaze” tag. How do you feel about the way shoegaze has become cleaner and more accessible over the years?

B – The term “shoegaze” is a complete joke now.

What does the future of Nothing hold? Any big shows, tours or releases we can expect in 2014?

B – Tours. Records. A split that I think is semi being kept secret, European tour, hanging out with our friends that we’ve made across the planet, which is most important, and making more of them.

N – Money for opiates and maybe a meaning for life.

What newer/up-and-coming bands do you support? What bands should people be keeping an eye on in our opinion?

B- Sad Actor, a Philly band with a few of our friends in it. ’90s-ish emo-ish punk whatever. They’re great.

Guilty of Everything out March 4th on Relapse Records.
Pre-order: http://bit.ly/nothingguilty
iTunes: http://georiot.co/guiltyitunes

PrevStellar Master Elite Talks About Lyrical Perspective In Opposition of Global Elite
Interview: Shrapnel Talk About Non-Musical Influences and What’s Next on Their AgendaNext