One listen to the titanic, crushing doom made by Little Rock, AR’s, Pallbearer and it would appear that they’ve been doing this for 20 years. However, the band has only really been around since 2008, formed as a side project by guitarist and vocalist Brett Campbell and bassist and vocalist Joseph D. Rowland. In the years since their forming, the band’s career has taken off to monstrous heights thanks to the strength of their debut album Sorrow & Extinction. Now they are back with Foundations of Burden, another stunning and emotional masterpiece of modern doom, now with 10% more piano ballads!

Is your grizzled, veteran style of doom something you’ve been working on for a while?

We had a general idea of some basic points that we wanted to touch on with the project at the beginning, which we’ve sort of drifted away from at this point. But we’re definitely big fans of, like, My Dying Bride, big fans of Candlemass, and stuff like that. We hadn’t been playing that style of music before and we wanted to work on a new project that touched on those things a little bit. But my and Brett’s band prior to Pallbearer was not really even a metal band; it was heavy, but it was more like psychedelic music.

When did you begin writing Foundations of Burden?

We’ve been writing it for a long time. Actually, one of the songs on Foundations of Burden, we were in the process of writing around the same time we were recording Sorrow & Extinction and we considered including it on that record, but at the point it was at then, it didn’t really fit the vibe. We stopped working on it and focused on other things for a bit. But basically, for the last two years, we’ve been writing the songs for the new record. It wasn’t like every song was being worked on for the entire two years. A lot of the stuff on the new one, Brett and I wrote while away from each other.

How different was your songwriting approach on Foundations?

There wasn’t like a deliberate intent to necessarily do something. We definitely didn’t want to make Sorrow & Extinction 2, we definitely wanted to challenge ourselves to write a better and more dynamic record than that. And Brett and I, this time, we wrote… Like, I wrote half the songs and he wrote half the songs, and we worked on ‘em separately. Once we got to a certain point, then we started working on it with the full band, so that was a different approach compared to the first album.

Was there pressure on the album to meet high expectations or outdo the first record?

Well, that’s something that we’re obviously aware of, but when it comes down to it, there was no way we weren’t going to just do what we felt. We were gonna write a record that we felt was the best interpretation of what we want Pallbearer to be now. In the end, the pressure doesn’t really matter one way or the other, we’re gonna do what we do.

I feel “Ashes” is definitely the most unique song on the record. What inspired it?

My first instrument that I ever learned how to play was the piano. I actually was a pretty proficient pianist when I was younger, and I still like to play and write and stuff when I have the opportunity. I wrote that song and there was an old ‘70s Fender Rhodes in the studio, so I used that to play it instead of a piano like I had written it on. It’s like an electric piano, a little different, more specific sound. It’s definitely, like, kind of a different song that I still think fits the Pallbearer vibe.

It’s cool how it breaks up the vibe before the final song. Did you structure it that way?

We intended from the beginning that it would be the next to last song on the record and “Vanished” would be the last one. So yeah, it definitely has a deliberate intent on our part to have a little bit of ebb and flow on there, before the final emotionally intense ending.

Your music exudes 100% pure emotion. Does it just come out organically?

It’s definitely something that just comes out. All of the music that we write, it’s like an expression of ourselves and our emotions. So that’s what ends up manifesting. I guess we have some pretty intense emotions.

Where does your lyrical inspiration come from?

Man, I can’t really speak for the lyrics that Brett writes, but the ones that I write, I’m definitely drawing from real life experiences and putting them into an otherworldly, dream-like context. Also, I draw from actual images from dreams that I’ve had, and I try to use the songs to interpret what direction those dreams are trying to point me in with my life. But I don’t really like to talk too much about my interpretation. It’s up to everybody else to interpret for themselves. I think there’s a lot more value to the songs if everybody can just have their own meaning that belongs to them, rather than just hearing mine and that being the de facto thing that the song’s about. That’s kinda boring. Everybody should have a little ownership of the song, if that’s what they want.

Do all of these amazing tours and opportunities freak you out? You’re still a young band…

It’s definitely pretty crazy, but you’ve gotta roll with what life gives you. There have definitely been some experiences… Like when we played Roadburn [Festival], that was incredible. I had always wanted to go, and being able to play on that stage there twice, it was a great experience. On the whole, man, I never really expected this to happen, but not taking the opportunity would be a mistake, so we just take it in stride. It’s been a great ride so far, and I’m sure there’re plenty of interesting and wild things ahead, but you just roll with it. 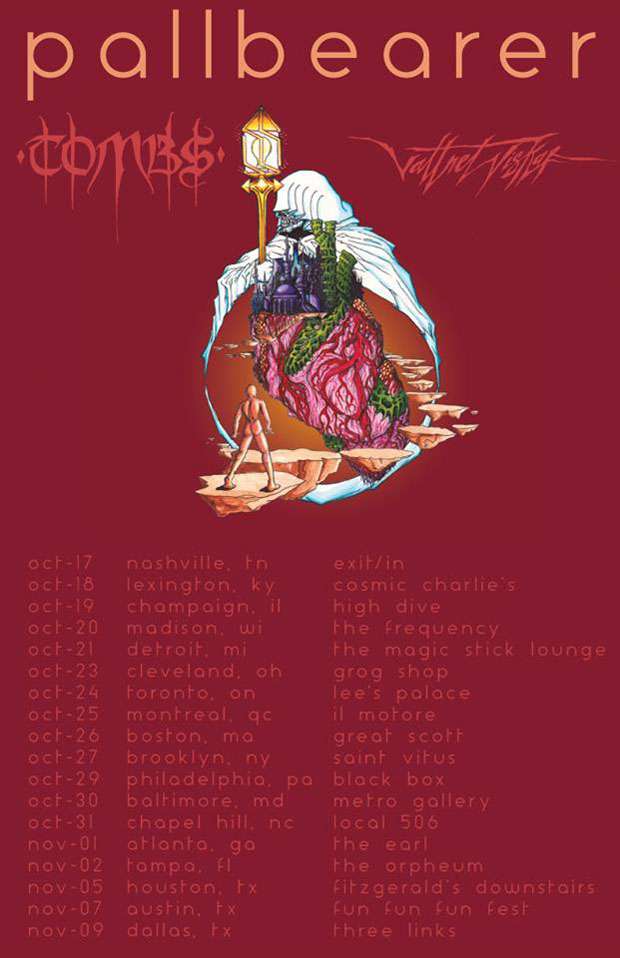