How do you leave behind a scene you helped popularize? How can you move beyond something you defined for an entire generation? Those are the questions French electronic artist Perturbator (aka James Kent) had to figure out when making his magnum opus. Lustful Sacraments, out May 28 via Blood Music, is a rousing success not because it ignores what has made Perturbator the pinnacle of synthwave (the mix of French house and ’80s neon-drenched nostalgia), but because it honors the past and transcends simple genre labels to deliver his best record yet.

It is a marvel how Lustful Sacraments feels like a total departure from both The Uncanny Valley and New Model styles while also utilizing some of the same musical ingredients. Perturbator’s signature— for lack of a better word— throbbing bass riffs are better than ever. Songs like “Death of a Soul” and “Secret Devotion” are glorious industrial goth jams, timeless in sound and as emotional as any goth coming out of the ’80s. So, what were some of Kent’s goals with Lustful Sacraments?

“The idea was mainly to make a love letter to post punk, while still keeping the DNA of Perturbator intact,” he says. “There was also this story I had in my head that became the framework for the album and its themes. I felt like the song structures needed to be a little more simple than on New Model, and I wanted it to be driven by melodies rather than complex percussion and distorted synths.”

“I have this sort of horror vacui,” he continues. “So it took some time for me to change my writing style and learn to not overcomplicate and add too many layers to the tracks. Lastly, I wanted the album to be much more organic, with real basses, guitars full of choruses and distant vocals, which are sort of trademarks of the goth and post punk music I enjoy.”

Kent has not been shy about wanting to separate Perturbator from a lot of the pure ’80s nostalgia of synthwave. What’s so awesome about this record are his continued nods to so many musical bits of the decade (Vangelis, EBM, post-punk, goth, even thrash), filtered through a modern lens. Did Kent feel any added pressure to truly leave synthwave further behind with this record? With this and New Model, Perturbator’s really created something truly unique.

“I’ve sort of reached a point where I don’t really bother with genre names or etiquettes in my music too much,” he answers. “It’s way healthier for me and my sanity to simply go with the flow and compose what I want to hear. When I announced that I would be doing non-synthwave music after releasing The Uncanny Valley, I feel like I might’ve confused some people. At the time all the big movies and TV series were riding on that ’80s nostalgia. The scene got really oversaturated, and many of its producers are real gatekeepers. Back then, if you strayed too much from authentic ’80s sounds or implemented elements from other genres, you’d be considered a non-synthwave artist, and you’d just have to fuck off.” 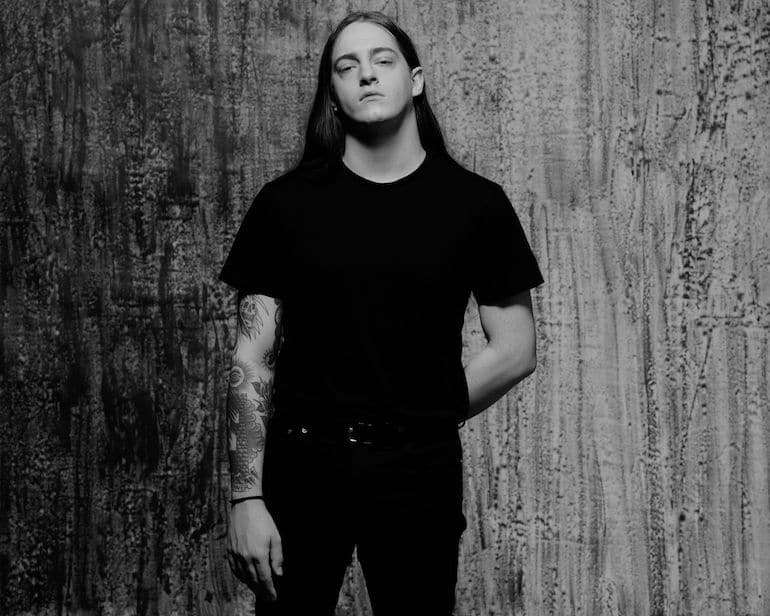 “Even though I started in that scene, these sort of ‘rules’ are not something I want to abide by,” Kent adds. “I don’t want to cater to nostalgic people and become a parody of myself, and I also don’t want to make the same album over and over again. I said everything I wanted to say when it comes to making albums that are love letters to 1980s trash culture and exploitation cinema. So, it was just time to go my own way and try new things I’ve always wanted to try. New Model and Lustful Sacraments both are a result of that decision and my proudest achievements so far. They have elements of a lot of music that I love, and feel much more personal in that sense.”

Musical storytelling is arguably what Kent does best— though that may be tied with excellent songwriting. Kent’s ability to craft clear narratives and visual stories with little to minimal lyrics is impeccable. There seems to be a clear theme in the record about humanity’s slow yet inevitable descent into self-destruction. What stories did he want to tell with this record?

“Basically the album has a story attached to it, which I used as a guideline to write the tracks and lyrics,” he explains. “It’s about a fictional city named Xanadu where nothing is forbidden, and everything is in over abundance. The inhabitants of that place end up doing whatever they love to do until they lose themselves in their excess of pleasures. They gamble, they commit criminal acts, they abuse drugs and alcohol, and in their minds, the city and its never-ending resources are the result of a divine force which they worship, hence the ‘sacraments’ part of it. I really loved the idea of a false Utopia, a place that looks gorgeous, full of gold and riches, that would turn out to be hell on earth, simply because people will naturally make it a hell for themselves. The album isn’t there to give people a moral lesson though, as I consider myself as self-destructive as anyone else. It’s more something I wanted and needed to write for myself, and maybe for some people to perhaps relate to.”

Check out Lustful Sacraments below: