Polar is another British import for Prosthetic Records (along with the killer post-sludge band Anacondas) who will continue the label’s commitment to releasing extreme music that savors feeling, risk, and vision. Their new release Shadowed by Vultures is a heart-on-their-sleeve shout-fest that bridges genres, and yearns for a better world while staying determined not to be stepped on by black days.

“First Breath” starts the album with a declaration, ominous yet strong. Then come looser grooves, experimental risks, and great gang vocals. You clearly took big leaps that paid off with amazing songs. Did you know you had a special album on your hands?

We really wanted to push ourselves with Shadowed by Vultures and put our hearts and souls into the challenge. We are very proud of the record. It will always be special to us and we hope that people listening to it feel that way too.

So let’s look at a few key tracks. “Blood Lines” says you guys have a death wish. Are you big Charles Bronson fans?

I don’t think the whole band is, but I am. He’s a legend. He was a total badass in the Death Wish series and in one of my all time favorites, The Great Escape.

Don’t forget Chino. How does Shadowed by Vultures best represent Polar in 2014?

It represents strength, determination, and never being willing to give up.

How does it feel to be part of the Prosthetic Records legacy? Light This City were very ahead of their time – like you guys. Even early Lamb of God or Kylesa had a rebel spirit your band shares.

It’s a dream come true to be part of the Prosthetic family, plus they have shown so much dedication and hard work towards our band already. They have worked with so many prolific acts and records. It’s an honor for our first U.S. release to be coming out through Prosthetic.

Your single “Mountain Throne” packs a huge punch and a monster breakdown. The song says to never lose faith. “Our Legacy” also really has a sense of holding on to confidence during trouble.

[That] breakdown is one of my favorite parts of the record. It’s like a punch between the eyes. It’s about keeping people you care about on the right track, even when they have fallen to the wayside. There is an underlining theme of survival throughout the record.

So obviously, Ellie Price is amazing. How did the brilliant “Before the Storm” collaboration come about? I can’t get that song out of my head. She is like emo-core Bjork.

Ellie is amazing and we are forever in her debt for her doing the track for us. Our producer Neil Kennedy had previously recorded Ellie’s band Signals, asked her on our behalf to do the song, and she said she would love to. That was us really thinking outside the box and it paid off.

Why did you incorporate the beautiful piano elements on “Paradise”? That is a very moving song.

Throughout the record, we wanted to experiment with as many different instruments and Chris [Stockings], our bass player, played piano. We want to have parts were the record really drops down and that’s where the idea for “Paradise” came from.

What do you hope people get out of this album?

We hope that people get a real sense of a journey and can relate to the songs. It took blood, sweat, and tears to make this record. I hope that feeling comes across to people listening. 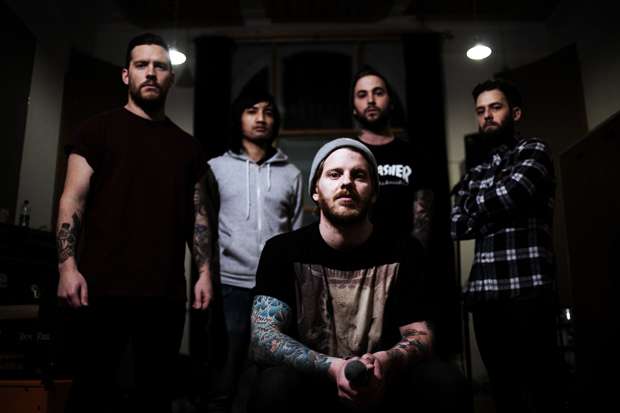 PrevInterview: For The Fallen Dreams Talks About Their Album Artwork And Where They Eat On Tour
Interview: Dead Ending Talks About Writing Lyrics And The Term “Super Group”Next