Queen V is the kind of performer who makes you wonder why people ever used the term “female fronted” as a disclaimer in hard rock and metal circles. In fact, hearing QV’s voice and witnessing her much lauded stage presence will make you maybe think that girls do it better!

The Decade Of Queen V looks back on much of her career bringing a gritty and pure rock n’ roll sensibility to fans across the land. This is a must have compilation and even features cameos from Lemmy and Tom Morello.

For those not in the know, Queen V has a fierce and dedicated approach, confidence and red hot stage shows which have made her well known and respected in the rock world. I used to catch her live in NYC often and it was great to talk to her and look back on great memories of New York, L.A., songwriting and more!

So, right off the bat I have to say I have a lot of respect for you. I saw you play in New York about eight years ago at CBGB’s and was blown away. Whenever I hear your music it is a refreshing reminder that real rock n’ roll lives. I feel like you continue in the footsteps of the greats but also have carved your own path. How does it feel to be looking back on this decade of music and to see all these songs together on one album? It must feel like looking at a road map full of memories!

Well, thanks very much, Morgan! It HAS been quite a ride, and that was exactly the point of putting all of these songs together on one album – to tell the story of my journey (up to this point) through these recordings, which truly distill the essence of what “Queen V” is all about. But The Decade isn’t over… in fact it is just beginning! I’m very proud of the past and also very excited about the future.

How did you get the confidence to start down the rock n’ roll path and step onto a stage? Has it been everything you imagined? You’ve shared stages with Bon Jovi, Corey Taylor, Lemmy, Perry Farrell to name a few.

I never had any fear of being on stage, and my confidence grew just by doing it. Working hard, practicing, and never forgetting to have fun and stay inspired. It has been quite an education, and very rewarding… and the whole experience has been much, much more than what I ever dreamed it could be.

So your sound has a bit of punk, some hard rock, some glam, some retro, some pop. Everything you do works together well and never feels forced. It is kind of united by your vibe and general aesthetic and of course voice. It is hard to kind of call you a genre other than “rock n roll”, which usually means a band is really good! Can you talk about some of the songs on The Decade Of Queen V you are proudest of? Little happy accidents when writing them or just lyrics that have stood the test of time? Anything.

I am very proud of entire collection. Songs like “America” and “Right or Wrong” have especially endured, both sonically and thematically, and the same goes for “Cry For A Minute.”  They’re always great to play live, and people keep responding to them as if they were written last night! And of course, writing “Wasted” with Lemmy was definitely a very happy accident!

“Cry For A Minute” is my fave. Your voice sails on that one. I really miss Don Hill’s and living in New York. I haven’t lived there since 2006. I still think there are a lot of real rock bands and rockers in the Lower East Side like Panzie*, Honor Among Thieves, Pam from the band Grande, my friend Dava who plays in Star & Dagger. Can you talk about what you feel is alive and special about New York rock today and why you started your “Take Back New York” series of shows?

New York is (still) a vibrant town for music, whether you’re into metal, classical, hip-hop, jazz, electronic, Americana or whatever – it’s all there for you. I started the Take Back New York events when clubs like CBGBs, Brownies, Wetlands, etc… started shutting down en masse. The first parties were held downstairs at Niagara, then found a home at Don Hill’s and really morphed once I teamed up with Nicki Camp. Since Don’s closed, the party bounced over to Sullivan Hall for a while and now most recently we did a TBNY: Queens Edition at Nicki’s new spot, Blackthorn 51. To me, the spirit and diversity of the people and music of New York are what makes this city special, and you can really feel it at the TBNY events… With a rock’n’roll flair, of course!

Can you share some of your best memories from performing over the years? You have really dug your heels in and worked hard. From the first time I saw you play I felt like you probably had lots of great stories. You just come across as very “real”. There is a lot of soul in your voice.

One of my best memories was the time we were at the Roseland Theater in Portland opening for Billy Idol.  It was the 2nd to last night of the tour, and he was incredibly gracious, inviting me to share the stage with him and sing the “Mony Mony” finale. Something about that moment in that hot box of a room, the thunderous roar of his band, and the floor to ceiling wall-to-wall people – well, all I can say is a little light when off in my head, and for the first time on that scale, I was seeing it all from the stage this time.  I was able to see and feel all the elements of a great show come together. This was how it could be, and I wanted more, more, more!

Another great memory came a few years later, when we opened for Bon Jovi at the Meadowlands arena. I saw my first concert there, and had also seen Bon Jovi play Giants Stadium when I was a kid, so the combination was truly unreal for me. They were super-supportive as well, a class act… and those songs! Man… it blew my mind to share that stage with them.

Lots of great memories at the Viper Room too… I swear there’s something in the walls there! Or maybe it’s the water? Anyway, I do love traveling and touring, but there’s nothing like playing at home. I can also honestly say that, to me, some of those nights in the early days at CBGBs and Don Hill’s were pure magic.

Can you talk about writing “My Machine” with Tom Morello playing lead guitar? That song has such a zany but cool riff and it really works.

The band and I had this groove we were working on, but the song itself didn’t have a home yet. I was a fan of Tom’s guitar playing from the get-go, so to have him rock the “My Machine” solo seemed to make perfect sense. I love the track. It is all about full-throttle, pedal to the metal, RAW POWER. People have told me that listening to the song makes them drive really fast, among other things….

Would you say you prefer message or story type songs or just to let each piece have what it needs? Also, I just remembered I think I saw you play in Woodstock, NY once also for a Steve Blush event at a Tattoo Convention years ago also! Does that ring a bell or did I make it up?

(Laughs) We definitely played Steve’s event in Woodstock! That really happened! Whatever the song needs, the song shall receive.

Any places in the world you would really love to play that you haven’t yet? Also, what is a guilty pleasure record for you? Anything you want to share about your “regular” life? Or are you all rock all the time?

There are tons of places I haven’t played yet that I hope I do, but my “Magic 3” are Madison Square Garden, Red Rocks, and Wembley. Rock’n’roll is always in my heart, but in order for me to be at my best, especially live, I need to work out. I take these crazy-amazing spin classes at Soul Cycle. It’s the perfect way for me to get into game-shape for any stage… and maybe someday for my Magic 3.

“Revolution Baby” had a cool video that looked like it was a lot of fun to make. I like that you started off the collection with that song. And the harmonica really burns. Does that song feel like your “anthem”? Or are they all like children and each one important?

All the songs are important in their own way, but yes, “Revolution Baby” sets the stage for what’s to come. The song was written about personal revolution, personal change. As in, whatever needs some serious fixing and attention in your life is entirely up to you.  You are empowered… Self-empowered.  And that killer harmonica is played by none other than Jon Paris… talk about series chops! We usually kick off the set with it, and it kinda became the unofficial TBNY anthem!! 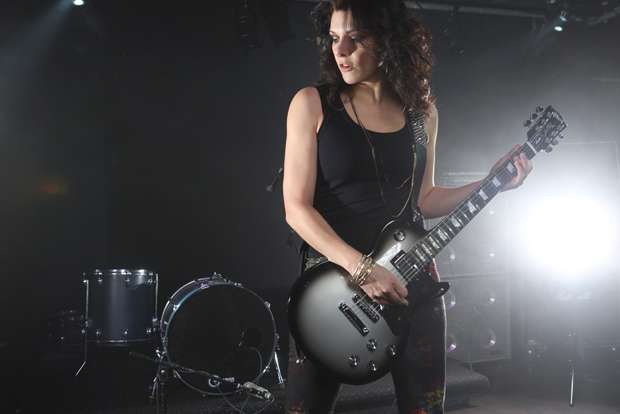