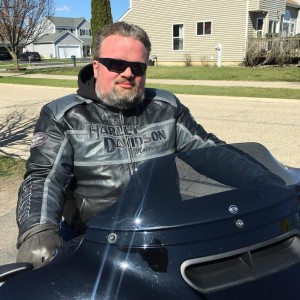 Interview: Razor are Back, and They Aren’t Going Anywhere

Thrash metal addicts might find it surprising that Razor guitarist Dave Carlo, known for his blazing, precision riffs, is legally blind. It’s a struggle he’s overcome and adapted to over the years with the help of glow-in-the-dark tape on his guitar frets and hours and hours of perfecting the art of thrashing. Unfortunately, slowly losing his vision to a rare condition called Stargardt’s Dystrophy has been a relatively minor challenge for him lately.

With the September 23 release of Cycle of Contempt on Relapse Records, one of the Toronto area’s OG thrash metal bands—featuring Carlo, singer Bob Reid, bassist Mike Campagnolo, and drummer Rider Johnson—unleashed their first new songs in 25 years and were psyching themselves up for upcoming live shows. Then, Carlo’s wife of 25 years entered stage four of gallbladder cancer which spread to her liver, and everything with the band came to a halt.

“It’s very strange because I’m very excited about this record and, at the same time, very disappointed to see the woman of my dreams suffering and trying to find a way to stay alive. So, it’s been very emotionally draining,” says Carlo. “This is a kickass record that’s going to bring a lot of pleasure to a lot of people. My wife has been very, very adamant about and supportive of getting this record done and out, and she wants me to get out and perform for people. Finishing the album and being creative has been very therapeutic during this period, and very good for me mentally.”

Globally considered one of the legendary thrash metal bands, Razor released eight albums from their formation in 1983 until 1997’s Decibels. After retiring the band in 1992— “the 90s were not a thrash era,” he says—Reid convinced Carlo to do what was to be the band’s final album. Not as fast and brutal as the bands classic late 80s era, Decibels never quite sit right with Carlo all these years.

“I wanted to do a classic Razor album. The kind of album that matched the level of (1998’s) Violent Restitution and (1990’s) Shotgun Justice,” says Carlo. “I didn’t want to be one of those bands that came back after 25 years, and people said, ‘I wish they hadn’t done anything new. I wish they’d just played the old songs.’ Because that’s happened a lot of times when I see bands, that just don’t have that spark on their new material. It’s almost like they’re mailing it in because they don’t have to work as hard. I wanted to bear down and deliver exactly what I would want as a fan.”

Like Charles Bronson’s Death Wish movies put to uncompromising thrash metal cranked out at 225 bpm, Razor have always portrayed violent imagery with songs like “First Rate Hate,” “Punch Your Face In,” and “All Fists Fighting,” just three examples from the new album. Still, beneath the brass knuckles, broken bottles, and spiked leather jackets is a sense of justice and doing what is right.

“It’s that idea of, ‘I’m not going to take bullshit.’ We’re not passive. We’re going to fight back if someone messes with us. You may notice in my songs though, we’re never the instigator of the bullshit. We’re always responding to it. We’re not out there creating the trouble, but if someone’s going to come and start it, then we’re prepared to finish it. That’s basically the theme of the band,” says Carlo. “Charles Bronson wasn’t out shooting people in real life though. He’d do that once and that would be the end of that. Our music is a therapeutic way for people to get their frustrations out.”

Relapse Records have been a big supporter of the band, reissuing three of their classic albums and a live album recorded in Japan. The label’s dedication to the band cemented Razor’s legacy in the pantheon of ever-bludgeoning thrash bands.

“I’m really flattered about the lasting power that the band has had over the years,” says Carlo, “and I’m so thrilled to see young people getting into the band, which is really what brought us back. It’s been fantastic and we’re very appreciative, and that’s why we have a new album.”

The 12-song Cycle of Contempt ends with “King Shit” and singer Reid yelling, “We’ll be back! We’re not finished!”

“Oh yeah. We’re not done,” Carlo confirms. “I feel like I could do another one right now.”

Get the new album here.

PrevInterview: Purity Ring on Live Shows in this Day and Age
Interview: Armed For Apocalypse Hype Up New Album, Touch on Near-Death ExperienceNext