Peter Frampton has said that playing on stage every night is the bonus. He considers the time getting to a gig, sleeping in different towns every night and the other things that make up touring, is where the payment is to him.  I didn’t know what the fuck he meant by that but So-Cal foursome The Shell Corporation basically said the same thing to me when they last past through Tucson in their seemingly never-ending string of tours. And it made sense this time around.

This is a serious fucking band with goals and it shows, with each member an accomplished musician before the formation of The Shell Corp. in 2011. As The Shell Corporation is a touring band that actually tours seemingly non-fucking-stop, it got me thinking:  “What is it like to tour?”

From what I have gleaned over the years (and at 49 you tend to glean a little even if you’re not paying attention), you either love touring or you hate it. I have heard this through the years, but the only experience I have with ‘touring’ is flooring Walmarts across the country, living in houses or extended living hotels with the guarantee of getting paid at the end of the week.  Not the same for a touring band.  [You are now shaking your head in agreement if you know.]

I asked for a little insight into the ups, downs, travails and travels of touring with one of the hardest working bands I know who currently are overseas on a month long tour supporting their latest offering, Mandrake (CD/LP via Paper + Plastick Records, Gunner Records (Europe), Solidarity Recordings).  Jan Drees was kind enough to be the only member of the band that still talks to me and for that, I thank him.

I believe you all have been around long enough to see the transformation and affect that social media and the internet has wrought, right?  Fans have gotten closer and with that may come a feeling of privilege, do you find that to be true? Has a fan ever stepped over the line in your mind?

I can’t think of any instance where a fan has stepped over whatever imaginary line we might have. Punk rock is an interactive music (if you’re doing it right), so I expect some rowdiness when we play, and getting the mic knocked into my teeth by an exuberant dancer when you’re playing on the floor is just part of the scene.  I’ve found fans to be very polite and respectful as a rule. It’s unexpected if you aren’t familiar with the scene, but punks tend to be the best behaved and most polite kinds of people (for the most part).

As for social media — it hasn’t changed much except making booking tours easier. Fan interaction is largely the same as I remember from back before internet social networking was a thing. Instead of writing letters to your favorite bands people just leave a message on your Facebook page.

I saw some corned beef hash when I was shopping, know what I am talking about?  Little bits of meat with tiny pieces of potato?  I almost bought some the other day. Do you get cravings on tour?  Are any members a pain in the ass about what to eat when you’re out on the road?

Curtiss is a “vegan.” Kind of. But other than that, we’re all pretty easygoing when it comes to food.  Cravings only come up when it’s something you definitely can’t get. On the west coast we crave Sheetz. On the east coast we crave In-N-Out or a decent burrito. In Europe I always crave American diner breakfast: scrambled eggs, bacon, pancakes.

It’s not the intake of good that preoccupies touring bands, though, it’s the evacuation of that food. A clean “shittable toilet” is the holy grail on tour. That’s always the first question asked of the first person to check a new venue out. “How’s the toilet, is it shittable?” Sometimes that even affects the decision to play a certain venue a second time.

Woe be unto the venue that doesn’t have stall doors or toilet paper or a toilet seat. That’s fine for the proles but we touring bands require more.

I googled but couldn’t find any pictures of the band in spandex.  How much luggage do you each take on tour, say your longest one yet?  I swear I’m not picturing it but how often do you guys bathe?  (Be glad you’re not astronauts, I’d be the ten millionth person to ask you how you go to the bathroom in space.)

There is a picture of Sean in a Spandex bodysuit. An intrepid face booker might be able to find it.  [Well fuck, I’m not intrepid enough, couldn’t find it.]

As far as how often we bathe on tour – as often as we can. Sometimes it’s 4 days in a row. Sometimes it’s not for four days. Sometimes you stay at someone’s house and have a look at the shower situation and say “Nope. I can go one more day.”

Speaking of that, will any of you admit to using a piss jar in the van?

Piss jars are only used in the event of being stuck in a bad traffic jam and having no other choice. Pee breaks are never frowned upon, and there is no shame in asking for one in this band. When ya gotta go, ya gotta go.

How do we take the power back?  Is road writing done?  Do you find inspiration in towns that you visit?

It may seem trite, but the way to take the power back is to TAKE the power back. We got to where we are today because the monied powers have slowly taken political power away from the people, and have been largely successful because we have let them. The way to reverse it is for the people to begin paying attention to what our elected leaders and corporate overlords are doing and to hold them accountable. This isn’t the first time this country has been this divided or this overrun with corporate dominance. It was turned around before, and can be again.

You have by far the greatest merch setup I’ve ever seen.  I gotta share a picture of this thing, it’s brilliant.

Thanks! We stole the idea from our friends and label mates The Mighty Fine. 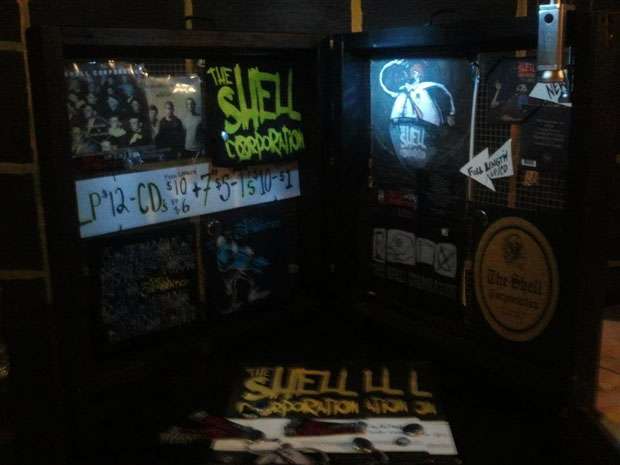 As The D have stated: “The road is hard, the road is fucking tough.” What is the nicest thing someone has done for you while you’re away from your loved ones?

Some dude brought us a bottle of Jameson in Tucson once for no reason. That was really nice. We’ve had friends buy us burritos, family let us make emergency visits for van repairs and the like.

Really, anyone who lets us sleep on their floor, use their shower, run a train on their toilet, gives us a few extra bucks for the gas tank, promotes shows, goes to shows, or buys our merch is doing us a huge solid. Thanks to all of you.

Where is it that you know you’ve got a great song?  When you play them live, see which ones work the best?  What is that process like?  Do you and the band tend to agree on the ones that seem to work the most for the listeners?

I usually know immediately when I’ve written a “great” song. Then we record it and it turns out not as good as I thought it was. Usually it’s easier to know the songs that aren’t up to snuff and need a lot more work.

Seriously, when you are writing a batch of songs as for an album you develop a hierarchy of which songs are stronger than others, which almost certainly changes as you start tracking in the studio and especially changes when the mixes start to come in. It can be surprising what the strongest end up being compared to how you thought it was going to be.

…All of which is COMPLETELY different from how a song goes over live. On an album you can afford to throw in the deep tracks, the slow jams, and get crazy with overdubs and instrumentation that would be impossible to pull off live. A live set is a completely different animal. There’s the time constraint, the fact that most of our audiences have never heard of us and we need to keep their attention. It’s not always a matter of just playing the fast songs, either.  Sometimes a great studio track just does not work live. For instance, Shell gets requested to play “False Bill of Goods.” We’ve tried it over the last year, and it just never works right. We play it well, but it always falls flat live. I guess it’s now part of the written record: We won’t play that song, so don’t ask for it.

The band is known for some great cover art.  Can you tell us how you hooked up with the artist?  Do you give him/her free reign or…..? 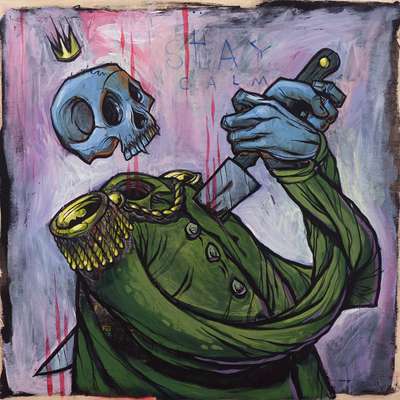 Luc [Martin] has been a friend of ours since we met just after high school, so, a really long time. He used to do flyers for my old bands, and I’ve got a painting of his hanging in my living room. When we were originally planning “Force Majeure” we had completely different cover art laid out.  One day we get an email from Luc with the picture that would eventually become the cover art – the fat guy eating the money – with the note “here’s some fan art, hope you can use it somewhere.”

That’s sort of become the arrangement. When we need art for a record or something, we just let him know what it’s going to be named and the themes.  The first thing he gives us is what will be going on the cover. No revisions, no critique.

He’s almost a fifth member of the band in that way – his artwork is as important a contribution to what makes the Shell Corporation as my voice or Jake’s drums.

[as I edited this interview before sending it in, Jan contacted me again and related the following]

Yesterday/last night [9-6-2014] had the two weirdest things we’ve ever seen, all in the space of a couple of hours. Driving up a narrow and winding Austrian highway on the way to a narrow minded Austrian farm town we passed a small creek where some people were picnicking. One man was completely naked and windmilling his dick at the fully clothed and thoroughly respectable looking picnickers. The picnickers seemed completely unfazed.

Then, whilst playing our gig in the aforementioned town, some kids began dancing around holding up a large green ball of some sort. Thinking it was in fact a ball, and that they wanted to play, Curtiss punched it, knocking it to the ground. Turns out it was the town’s prize-zucchini that Curtiss had gravely dishonored. This particular squash has its own Facebook page. For a moment we were in true danger of being run out of town by a mob of angry villagers armed with torches and farm implements. Luckily, the vegetable was found to be relatively undamaged and we were allowed to proceed.

The next morning I counted four men in the village wearing Lederhosen completely un-ironically. Oh, Austria.