With just one listen to German progressive rock titans RPWL, it’s pretty clear that they’re a thinking man’s progressive rock band. They’ve been churning out beautiful and intense jams since 2000, but it wasn’t until 2012’s Beyond Man and Time, their first concept record, that they really found their groove. Now, just under two years later they are releasing its follow up album Wanted, which is also a concept album, except its concept is much deeper and more expansive and the music is even more expansive and gorgeous than any of their previous records. In this conversation with vocalist/keyboardist Yogi Lang, he explains the album’s concept, what inspired it and how it ties into the story from Beyond Man and Time.

Around this time last year, you guys were still touring for your album Beyond Man and Time. At what point did you begin work on Wanted and what was the band’s mindset like going into the writing process for the record?

It was in November when we started off to breathe life into the story called Wanted. This was the point when music and lyrical content came together to grow side by side. Though the idea was born quite some time ago, it wasn’t an easy job after a concept work like Beyond Man and Time. We knew it had to be something different, something new.

From what I can tell reading about the concept of Wanted, it would appear that the album is about the illegal distribution of a drug that grants the ultimate liberation of the spirit, is that correct? If not, could you further explain it for me?

Yes, for one narrative level that’s correct. I mean, isn’t it one of the most fascinating things, your duty to act in your ethical understanding in combination with running out of legal options? It is the decision between leaving the path of being human and leaving the path of our social concept of power relations. In our story we are convinced of the need to overcome restorations of old concepts, repainted versions of old failed models in order to get closer to an idea of what human being could be in the future. A lot of our religious heritage is a mixture between finding answers for unanswered questions and trying to gain power and influence: no new ideas, no original thinking! It slows down a natural evolution of our fundamentals of ethics. The cure we found and we tried to distribute in form of a small pill will cause the simple walk out of Plato’s cave. A transformation we call: the freedom of the spirit! In fact no one knows what really if you take away all myths, all old patterns of belief, but do we really need them? For example: to feel with someone, our human empathy, is a pure evolutionary ability, no divine given secret. Modern brain researches show that mirror neurons guided our way into a social living! So you see, it wasn’t a heavenly controlled gift but an evolutionary development. There is no need for a transcendent guide. It sounds so clear, but remember, it was not long ago, in the middle ages, that people thought that pest was the wrath of god with horrible consequences as we all know. Somehow murdering in the name of god has a dark tradition in history, hasn’t it? I mean, it’s not a question of the existence of one or more gods or whatever you belief in, everyone should have the chance to belief in whatever he wants. It’s the question of being open minded for the truth behind all illusions and the acceptance of man as a self-determined human being, with our evolutionary gift: our ability to think! Belief is only a place holder for not knowing, and a very dangerous one: have a look at the crusades around 1100 A.D. in Europe. Another dark chapter and symbol of senseless religious aggression! There is no truth in belief or creed, but I’m quite sure there is something like the truth to find in the reality of our being, our existence, ourselves! But, to come back to the story: Take a pill and be prepared for the new dawn of mankind! You can imagine that there are many institutions, including the industry of our world religions that are not very amused and not interested in such a concept called “freedom of the spirit”! And so the persecution begins! The ruling elite acts as usual: they try to criminalize us. That is the main condition to fight us and to catch us. So we take our last option: becoming illegal and going underground! We go all out to give people the possibility to return to a self-determined human; in a global attack we fill the substance into the water all over the world. The fruit will be a new culture of thinking in a new dawn of the human race!

Where did the inspiration come from for Wanted’s deep and fantastic concept?

It’s like a follow-up of the last album. A lot of people said that Beyond Man and Time was too theoretical having no practical use. But that’s not right. It’s a story full of pictures, thoughts about our life and our role as individuals thrown into this world. One of the main thoughts behind this story was a thing we called: “freedom of the spirit”! A chance to free ourselves from all the old patterns of belief, from all the myths of a controlled human being, to free ourselves from the industry of religions. All the given illusions and promises may be consoling, but they are not useful to overcome today’s problems of a globalized society. We need to return to a self-determined human, able to learn. Anyway, this was the thought I wanted to take and transport into reality, our social reality.

After releasing Beyond Man and Time and then going on tour, did you find any difficulty coming up with the material for Wanted, or was this a concept you had wanted to explore for a while?

Beyond Man and Time was very theoretical and so it was right after the tour when I thought about bringing the main idea of “Beyond Man and Time” into our here and now! The idea what we call the “freedom of the spirit” had to be in the focus. It is our antithesis to old religious models to overcome the actual deadlock of the spirit. In fact it wasn’t difficult to write the story; it was more difficult to bring in new ideas into the music production to make it somehow different. The only thing that was clear at the very beginning was the fact that a world beyond man and time couldn’t sound like the rough world outside. 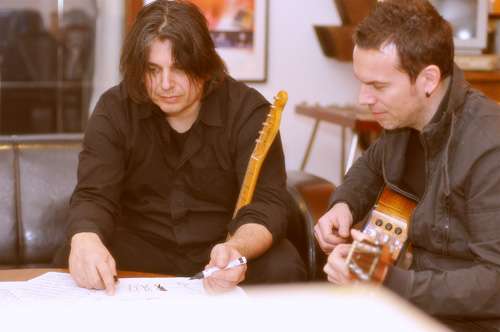 With both Wanted and Beyond Man being concept albums, did you notice any major similarities or differences between the writing processes for the two albums?

Both albums are based on a story as a central theme. So the process was pretty much the same. But I think the result is a bit different. You can feel the presence of the world beyond man and time with all its figures in the music of the album, being very metaphoric, talking in allegories because the subject is too big to get clear words for it. Wanted is more a story, here and now, rough and direct. At least I hope so.

When working on a concept album, especially one as deep and massive as Wanted, do you usually write the music or lyrics first, or are they written around the same time?

For me, the idea has to be first, together with first fragments of the. It’s hard for me to bring in music without a lyrical content…without words is just music. This is not what we try to do…

With the limited edition version of Beyond Man and Time, you guys came out with an audio book version of the album. Do you have any plans to revisit this or was that more of a onetime thing?

This time it was more difficult. An audio book to the story of Wanted would have tilt the whole band, the whole project… If you have a look at the story, I fear you needed at least a 300 pages book! Maybe something for the future… For the Wanted Limited Edition we decided to add some music things. We did a 5.1 surround mix on a DVD… no movie content, just the possibility to listen to it in surround on your home entertainment system plus one more song! A nice thing because we often play live in quadraphonic sound. So you have the chance to get the live sound into your home.

Including Wanted, you guys have been on a pretty heavy schedule of releasing an album every other year or so. Do you believe this is a trend that you can/would want to continue? If so, do you think you’ll be working on more concept albums in the future?

It’s the writing, recording, releasing, touring that makes the schedule really heavy. But there are also lots of things we want to do besides RPWL, like our solo projects, or releasing other bands. With our Label “Gentle Art of Music” we have a good company to give other artists the chance to release good music! So you see, heavy workload, no time to think about a new one at the moment…

When listening to your music, the one influence that most certainly and obviously comes to mind is Pink Floyd. Would you say that your music and writing style is still heavily influenced by the bands you’ve grown up listening to, or do you find inspiration coming from less obvious places like books and film?

The music you grew up with will always be part of your emotions. And music is of course, emotion. To be honest, I’ve never been angry when someone was talking about a “floydy” style or sounding like whatever. For me, the interesting thing about music is the way to melt music and lyrical content together to find a new language, a new way of conversation together with the listener! But not in the very stupid way like in movies -let’s get sad and use some minor chords and strings… no, I mean more in a way to find a key to a further understanding of what ideas are about. But it’s true that books like Thus Spoke Zarathustra from German philosopher Nietzsche will always give more influence to me like any existing music could do.

Finally, as far as the band’s name goes, due to only two original members with initials in the name remaining, have you given any consideration to changing the name, or is that not an option for you at this point?

PrevInterview: Special Explosion Talk About How They Got To Where They Are
Interview: Mount Salem Respond To Flattering Youtube CommentsNext